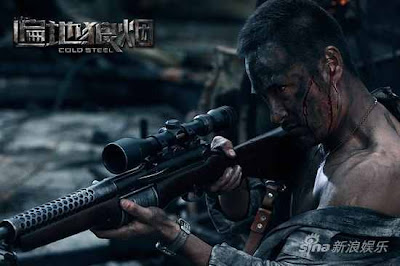 ‘Cold Steel’ is a movie set on a Pacific island in WWII, where Hong Kong action star Guo Minxiang plays a Japanese sniper with a torn shirt and…an American M1941 Johnson Rifle? And a variable-power riflescope that wouldn’t be invented for another twenty-five years? Really, now: Arisakas may not get much love among American shooters but they’re actually excellent rifles, and just about any period rifle would be a superior sniper weapon to the recoiling-barrel M1941 Johnson and its delicate magazine. Why does Hollywood (or in this case, Hong Kong action cinema) get guns so wrong most of the time? . . .

Is it because the demands of gripping action, exciting visuals and the all-important box office take (or Nielsen ratings) needs outweigh the desire to depict firearms in a realistic manner? Or is it because far too many Hollywood glitterati are anti-gun ignorami who don’t know a gun’s muzzle from its magazine well? Or is there an agenda being pushed on us?

The technical depiction of guns onscreen isn’t as bad as it used to be, although I don’t know whether it’s the directors or the bean-counters we have to thank. Many of its big wheels would love to disarm all of us while they live behind gates and surrounded by armed security, but Hollywood should get some credit for improving at least their technical depiction of guns. Even though this example of epically-awful crap came from Turkey, this kind of coffee-spit hilarity was pretty standard fare for 1970s TV shows.

Today, most war movies and bigger-budget action flicks know they’ll lose their action cred if they don’t bring on a technical consultant like Dale Dye to keep them from stepping on their dicks with laughably foolish on-screen weapon handling.

And in case you ever noticed that there are many guns you never notice onscreen? Some manufacturers are happy to work with Hollywood (even as Hollywood poisons the public attitude toward the Second Amendment) by giving them free guns to show in movies. On the reverse of the coin, a Ruger representative told Entertainment Weekly in 1999 why we rarely see Rugers in films or television: Ruger doesn’t sell to prop houses.

”Hollywood never shows the 99 percent of typical firearm use: People using them responsibly, nobody being hurt, families shooting together. We watch these violent movies and think we’d have to be crazy to want to be a part of that.”

I’m as much of a Hollywood Insider as the guy who pressure-sprays your parking lot, but most of the movie people I know not only ‘get’ guns, they’ve also got them. An old college friend in the CGI biz kept a 9mm under his bed because he lived in a nasty part of inland Venice Beach, and another screenwriter acquaintance used to illegally carry a .38 snubnose every day in the Southland. (The statute of limitations has long since expired in both instances, in case any LAPD detectives are reading this…)

My industry contacts may have been atypical, but it’s sad that for every David Mamet, John Milius or Charlton Heston there are at least a dozen Hollywood hypocrites who earn millions playing with the very guns on screen that they would like to confiscate from our collections.