We all love to shoot our ARs, AKs, SCARs and other modern sporting rifles, but the price of ammo makes it impossible to spend an afternoon burning powder without burning a hefty wad of cash in the process. Even if you don’t mind using the cheap (steel-cased) stuff, you have to plan for spending almost $75 to burn through ten 30-round magazines.

So whaddya gonna do?

You’re gonna find a way to play and practice using .22 Long Rifle, that’s what. It’s really hard to beat the .22LR rifle cartridge when it comes to price and availability, as handgun shoots have long known. It doesn’t perforate Tangos as energetically as the 5.56 and it’s not as cheap as it used to be, but there’s no better bang for your buck in the plinking world. (Airgun pellets may be cheaper than .22 shells, but they don’t go bang so they don’t count in my book.)

If you get the rimfire jones for your AK, SCAR or HK, you’re gonna have to buy a whole new rifle for $300 and up. Luckily, AR carbine owners (Colt, DPMS, Remington, CMMG, and many other brands) have options that other shooters lack: We can pull our pins and install a dedicated .22 Long Rifle upper receiver, or pull the bolt and drop in a .22lr conversion kit. Each option has its benefits and its drawbacks. Dedicated 22lr uppers are the more expensive option, for several reasons. First is the price of the 22lr AR complete uppers themselves: you’re lucky to find one for less than $350. The cost of these uppers continues to amaze me, since they’re only slightly cheaper than many quality centerfire uppers in 5.56 and other calibers. In fact, a dedicated .22 long rifle upper receiver group is nearly as expensive as a dedicated .22 Long Rifle AR rifle. What is up with that? I’ve never heard anyone gripe about their M&P 15-22, so I’d probably go that route before I went with a dedicated .22 upper again.

Whether you’ve got a .22 AR rifle or a dedicated .22 upper, if you want it to run like your ‘real’ 5.56 AR you’ll have to mimic your accessories like hand guards, optics, lights, lasers and rails. There’s nothing wrong with substituting lower-priced alternatives on your .22 upper; nobody will call bullshit on you if you bolt a Chinese knockoff on your .22 instead of an Aimpoint Micro red dot with a Badger Ordnance mount. But even bottom-shelf lights, scopes and mounts can add another Benjamin or two to the cost of your ‘budget’ rimfire range toy.

A .22 conversion bolt carrier group (BCG) is far cheaper to purchase at $150 or thereabouts, and it also won’t need any new accessories other than maybe some extra magazines. 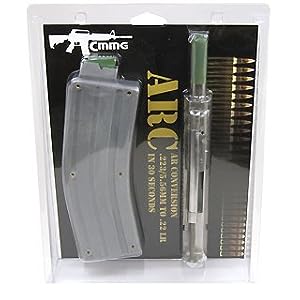 If you think I’m starting to lean toward .22 conversion bolts you’re right, but price isn’t the only consideration to keep in mind.

So what’s the catch with .22 conversion bolts?

The first catch is that there is no bolt catch. .22 rimfire AR magazines don’t engage the bolt hold-open catch on AR-15 rifles’ mil-spec lower receivers. This means that your .22LR magazine reload drills will be different from (and slower than) your 5.56 reload drills because you’ve got to rack the charging handle when you swap out empty magazines.

Another catch, er, issue is that your 5.56 optics are not zeroed for .22 Long Rifle ballistics. At tin-can distances they might or might not coincide, but at 50 yards your .22 shots will probably be way off. It’s VERY important to mark your 5.56 NATO zero so you can crank right back to it when your .22 shooting session is done.

There are two other issues that affect .22 AR conversion units, but not dedicated .22 uppers or rifles: accuracy and filth.

When you shoot .22 Long Rifles through a 5.56 upper, accuracy is affected by the 5.56’s slightly larger bore diameter and much faster rifling twist. The .22 long rifle has a bullet diameter of .222 inches, and most .22 long rifle bores are slightly smaller than that so the soft lead bullets will seal well. 5.56s use .223 inch bores, which are just slightly oversized for .22 long rifles. Rimfire .22s also use a 1 in 16″ rifling twist, while modern 5.56 barrels are either 1 in 9″ or 1 in 7” twist rates. These factors combine to produce non-olympic smallbore grade accuracy in AR uppers, but few of us will care when we’re gleefully putting rimfire double-taps into cardboard targets at 75 feet or less at three or four cents a shot.

.22 rimfires are also dirty-shooting cartridges, because their soft-lead bullets are lubricated with wax or grease. All .22s suffer from this, but 22LR AR-15s suffer even more because all that lead and lube sludges up the AR’s oversized, overtwisted barrels and gums up their gas tubes. CMMG AR-15 bolts may function best with certain brands, so try different bullet finishes from Winchester, Remington, Federal, CCI, or other ammo makers to figure out what works best in your CMMG dedicated 22LR.

In practice this means that cleaning your 5.56 AR after a rimfire practice session will be exceptionally unpleasant. You can minimize this if you bring your 5.56 bolt assembly to the range with you and fire ten or thirty rounds of 5.56 through the rifle when you’re done shooting the .22s. The full-power 5.56 rounds blast some of the wax and lead out of the barrel, and they also blow the wax out of the gas tube. Don’t worry, the slight wax buildup in the 5.56 bolt is really easy to clean.

All in all I’ve been much happier with a .22 conversion bolt group than I was with a dedicated upper. Now I just wish they’d make them for my 5.45mm and 5.56mm AKs…

For more information on other 22 LR AR-15 conversions: