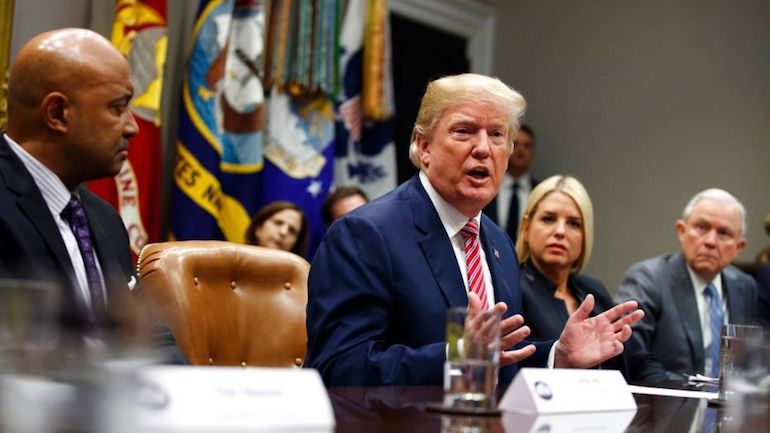 “President Trump on Wednesday voiced support for confiscating guns from certain individuals deemed to be dangerous, even if it violates due process rights,” thehill.com reports. ‘I like taking the guns early, like in this crazy man’s case that just took place in Florida … to go to court would have taken a long time,’ Trump said at a meeting with lawmakers on school safety and gun violence. ‘Take the guns first, go through due process second,'” This he said despite . . .

Trump was responding to comments from Vice President Pence that families and local law enforcement should have more tools to report potentially dangerous individuals with weapons.

“Allow due process so no one’s rights are trampled, but the ability to go to court, obtain an order and then collect not only the firearms but any weapons,” Pence said.

“Or, Mike, take the firearms first, and then go to court,” Trump responded.

Here are some more choice Presidential quotes from the firearms chin-wag:

“Don’t worry about adding in the bump stock ban, I’ll do that myself — fortunately we are able to handle that without going through Congress.”

“The background chekcs are so important….people are afraid to do background checks because they’re afraid of….somebody. ….I don’t care who’s endorsing you, you’re going to be MORE popular if you do it.”

“It takes so long going to court to get due process – I like taking the guns early — so I like what you’re saying, but take the guns first, go through due process second”

“It would be really nice to create something that’s beautiful, that works.”

“What surprises me is that nothing has been done for so many years…I don’t understand why this hasn’t happened for the last 20 years…..there is so much commonality between Republicans and Democrats.”