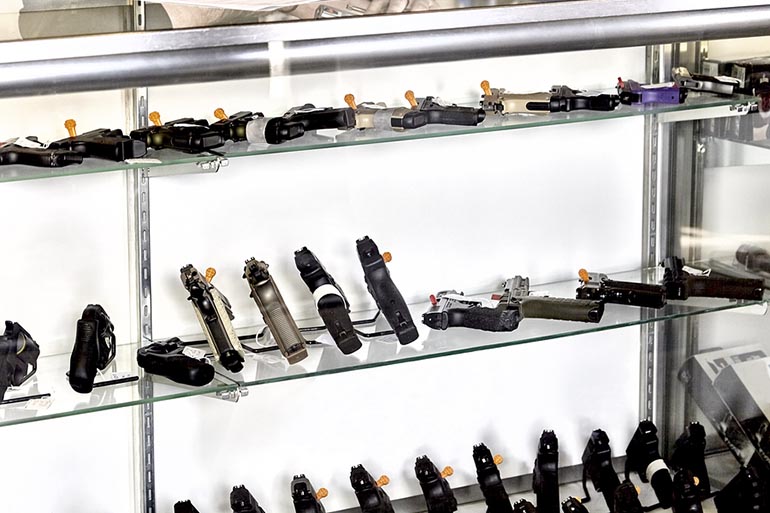 Every so often, a local police department, state or federal law enforcement agency will trade in their firearms for new ones. When they do, the manufacturer or the dealer/distributor of the new merchandise gets a flood of trade-in used guns. They either sell them as-is where-is, or refinish and refurbish and then sell them.

This can represent a terrific value to an educated consumer. Or, in some cases, it can lead to a terrible experience for bargain hunters. Here are some thoughts on both scenarios and how to get the best for your buck.

Guns are expensive. Ammo is expensive. You work hard for your money, and maybe you don’t want to buy a gun at full retail and take a hit if it turns out that it’s not a good fit for you.

Maybe your local firearm retailer gets in a batch of police trade-in duty guns and you’re not sure if what they have is for you. The price is right and they seem like a good buy. Should you pull the proverbial trigger?

Here are a few pearls of wisdom that I’ve accumulated over the years about law enforcement agency trades.

Not all police trade-in guns are alike

What I mean by that is a department’s decision to buy a gun in the first place — or change to a new model — is made by a police chief somewhere who’s just been taken out for a very expensive meal by a manufacturer’s rep.

But just because, say, a GLOCK 19 was traded in, doesn’t make it necessarily the same as a commercial G19. Each agency stipulates exactly how their guns should come from the manufacturer. 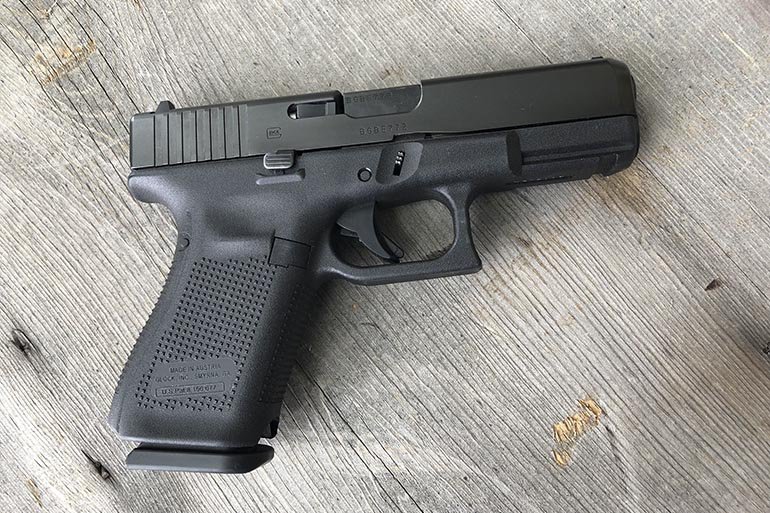 If, for instance, you got tour hands on a former NYPD GLOCK 19, you’d have a gun with an atrociously heavy trigger pull because New York cops used to have a tendency to accidentally shoot things if the trigger pull wasn’t set at a minimum of 12 pounds.

If you do decide to pick up a PD trade-in gun, look at it closely and make sure you know what you’re getting, otherwise you might be in for a nasty surprise…and some gunsmith bills to get it the way you want it.

One thing most trade-ins have in common: reliability and standards of maintenance

Nearly every agency in the nation has a staff armorer who repairs and maintains guns to department standards. Most of the time that’s something as simple as a visual inspection every time there’s an annual firearm qualification.

Given how little most duty guns are fired, that’s usually all that’s needed. Other times it can be a more intensive examination based on the specific officer’s history of use or other factors. The great thing about PD guns is that they have a tendency to be highly reliable. PD’s typically don’t buy guns with design issues. They tend to stick to tried and true makes and models from manufacturers that have good reputations and an ability to support the products they produce. This is why you’ll see M&P’s GLOCK 19’s in basket weave holsters far more often than, say, a Hudson H9.

Rode hard and put away wet or dropped once, never fired?

People tend to look at police trade-in guns from two perspectives. One is that all PD guns are hard-use and have had millions of rounds through them. The only reason they’re being traded in is that they’re at the end of their useful lifespan.

The other view is that all cops are really social workers with guns. They hate going to the range except when required by department policy, hence their terrible accuracy during officer-involved shootings.

My experience with guns and cops tells me that option two is far more often the reality. 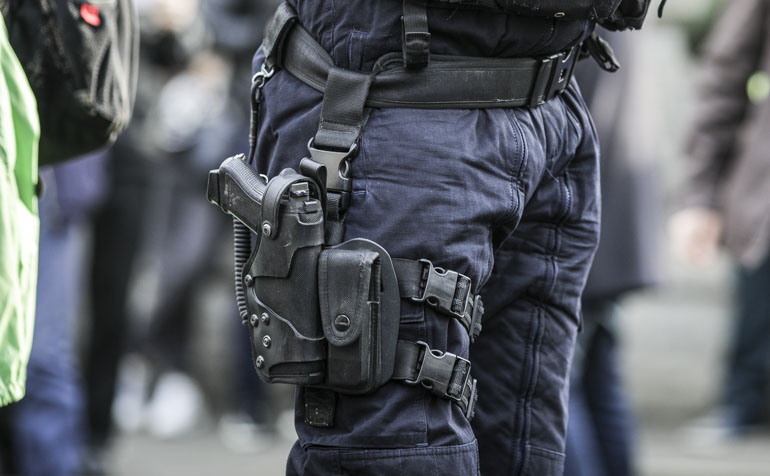 You could very well get a gun that’s been riding in a holster for most of its life. It may have some surface wear, but it probably hasn’t had a lot of actual heavy use. You could also get an agency spare that was sold to the department and never issued. It will look just like a brand new gun.

Yes, you can find these diamonds in the rough out there. I don’t know any law enforcement agency that doesn’t have some spare guns lying around, but when the entire lot gets traded in – just like any other commodity, the choice stuff goes fast. For years and years, .40 S&W was the prevailing caliber choice for a large segment of the LE community. Now that 9mm ammo technology and performance has improved significantly, more agencies are buying 9mm duty guns and trading in their old .40 cals.

Does that mean .40 S&W doesn’t work? Not at all. I wouldn’t want to be shot with one. The bright side: LE trades can open the door to a price conscious consumer that wants a highly reliable pistol at a steep discount.

I would much rather see someone spend $350 on a trade in S&W M&P or GLOCK pistol that’s known to run and has a maintenance history than a Taurus, Jimenez or Ring of Fire gun made from pot metal that has a tendency not to run when you need it the most. What to look for: Condition, Price, Suitability

Just like shopping for any other used gun…be careful. If you don’t know much about used cars, you’d be wise to approach buying a used car with caution. The same goes for a gun, a tool on which you might stake your life some day.

The condition of police trade-in guns varies widely. If your dealer has a good selection, don’t just look at the one he pulls out of the case. Ask to see a few of them. Otherwise, you might get stuck with one that’s worse for the wear.

Keep in mind that a lot of the grading is done by the dealer or distributor so when you see guns that are described as GOOD or VERY GOOD, that data point is subjective. However, some guns are graded when they’re inspected at the factory and repaired/refinished.

SIG does a decent job of this by putting their guns in a red box and marking them as EXCELLENT or VERY GOOD or GOOD, etc., so as long as the box, grade and serial number all match up – you can get a pretty good indication — assigned by the factory — about what you’re buying.

See our post on How to Buy a Used Gun here.

Prices on trade-in guns vary, of course. I’ve seen them sell at retail for hundreds less than new and in some cases only than $50 less than a comparable used firearm. Where you can find some value is that they usually come with a handful of mags, and if you’re like me and have to have 5+ magazines for every pistol – that can factor into your dealmaking decision process.

In terms of suitability, make sure the gun fits your desired application. Whether it’s home defense, concealed carry, or just turning money into noise, the gun needs to fit you. I’m not a fan of some guns like the Beretta 92 due to the slide-mounted safety lever. It’s not suitable for me, but you might love it.

What to Avoid: Condition, Price, Suitability

Like I said earlier, if you don’t know how to evaluate a used firearm – this might not be for you. I personally love scuffs, dings, scratches, etc. on used guns because it lets me buy them cheaper and honest wear is a sign of character.

I am more than happy to buy guns that have run into lots of doorknobs or door frames. However, I’m usually able to tell if they’re structurally sound.

As long as there are no glaring issues like barrel damage, cracks in the frame or frame rails or the slide, since those aren’t easily repairable or a DIY project you should be good to go.

If you don’t have the experience necessary to assess a firearm, look at guns that went back to the factory for inspection and refinishing. In some cases they will come back with a ‘CPO’ or ‘Rebuilt’ sticker and a warranty. That can remove a lot of worry and guesswork.

Of course, if this isn’t exactly your forte, ask your dealer to compare the price with a new gun. Some SIG CPO guns sell for $500 regularly whereas a newer model pistol with two fewer magazines goes for $925. Those cost savings are very clear.

Some rebuilt GLOCKs sell for $425 where a new one can be had for $500. It just depends on what’s available and what’s out there. If you’re not comfortable buying used and saving $75, by all means consider going with a new pistol.

There’s an old saying in the pits of the Chicago Merc — when in doubt, palms out. The direction of the palm indicated buy or sell, meaning if you’re in doubt, be a seller and not a buyer.

There’s an analogue here in that if you’re not sure if this avalanche of .40 S&W pistols coming to market is for you, just don’t buy one and stick with what you know. It could save you from making an expensive mistake.

Have you purchased police trade in firearms before? How was your experience and how did you enjoy your purchase?

Leave a Reply to Eric in Oregon Cancel reply