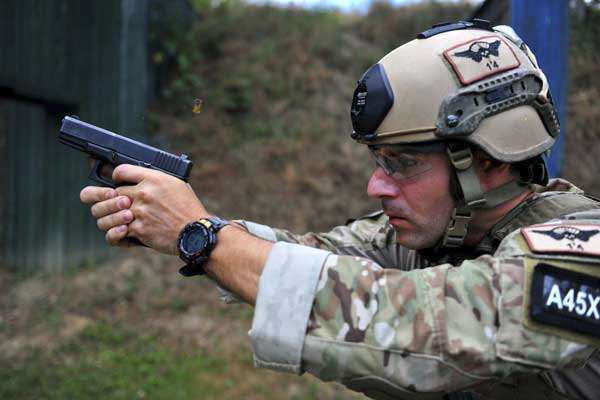 Responding to the recent posts about the Army’s Modular Handgun System and MARSOC’s choice to move to the GLOCK 19, many of TTAG’s commenters have stated that the pistol isn’t important to the service member, or that things have to get really bad for the service member to need a handgun.

On the contrary, the service pistol is more important than ever.

First, there is the simple reality that it’s faster to transition to your sidearm than to exchange your rifle magazine or to fix a malfunction. Today’s military operations include the cordon and search of urban areas, much of it inside homes and other structures. During these operations, if the enemy is close at hand and you are pouring out rounds to either kill them or break contact, the best thing to do when that M4 fails to fire is to let it hang on its sling, draw your sidearm, and keep putting rounds on target.

When my training changed to immediately transition instead of loading a new magazine or performing SPORTS, I strongly resisted the change. I just couldn’t see how drawing my pistol and firing was faster or more effective. But repeated, exhaustive trails proved that it certainly is. Especially inside a room, I could draw my M9 and fire far faster than I could exchange a magazine, no matter how much I drilled to change a magazine quickly.

Next, the reality is that sometimes you’re only going to be using one hand. For a medic, like me, this was often the case. There were times in combat where I was dragging someone, or kneeling down and holding pressure, that I just didn’t have two hands to spare.

The same could be true for any soldier or Marine. All buildings aren’t entered through a door. Some are entered through a window, some over a wall, some under a fence. During these times, the pistol in your hand is absolutely necessary. For anyone who’s ever climbed a ladder to get over a mud-hut wall, those last couple of rungs before the top can be pretty hairy, and your pistol needs to be in your hand, a role the service rifle can’t fill.

Finally, the US embeds thousands of servicemen with host nation militaries and police units. My job during my tours in Afghanistan was that of “military advisor.” My team and I not only trained and fought next to, but ate with and lived with the men we were assigned to.

The reality is that, although the vast majority were solid patriots, others were either directly on the other side or would quickly switch sides for cash. Our host nation counterparts could, and did turn on us at times, and the pistol needed to be at hand and ready to deal with those threats.

The bottom line: the pistol isn’t an afterthought. It’s a vital weapon and often the only one available to the service member. So it’s important that the military gets that weapon right.

As an aside, in many cultures, the sidearm is only given to officers and is more often used for impromptu summary execution, (something I have personally witnessed), than for any kind of actual combat. The pistol then has a very different meaning to much of the members of the military there, as well as the civilians.

Holding your rifle means you are ready to fight. Drawing your pistol means you came to kill. I’ve personally witnessed one of my team’s officers sling his M4 and draw his pistol, eliciting an immediate attitude change in the Afghan man he was speaking with.