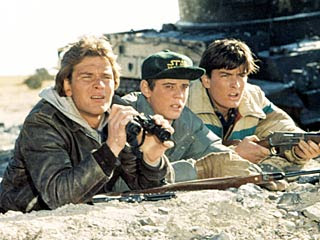 I get a lot of email. Dunno why. It’s not like I’m askin’ for it. I’ve got a filtering system from the gates of Hell itself, and still I get a lot. Some of it, I even read. I have a friend that likes to forward things. Have I mentioned how much I hate forwarded emails? Not that some aren’t interesting. It’s just that I hate having to deal with the ones that aren’t. Oh, sure, I could just burn ’em before reading. But if I did I would have missed this one. Which made me stop and think – a pretty good trick when I’m on a jihad against junk mail. This one was different. And I think when you read it, you’ll be thinking about the subject too. Not that completely agree with it, but still…see for yourself:

I have never really thought about this perspective. I no longer hunt but will keep my guns handy! The enemy would surely resign if faced wit 600,000 Boudreaux’s, Thibodeaux’s, Arceneauxs, etc, HA!

The world’s largest army…America ‘s hunters! I had never thought about this…

A blogger added up the deer license sales in just a handful of states and arrived at a striking conclusion: There were over 600,000 hunters this season in the state of Wisconsin. Allow me to restate that number. Over the last several months, Wisconsin ‘s hunters became the eighth largest army in the world. More men under arms than in Iran. More than in France and Germany combined. These men deployed to the woods of a single American state to hunt with firearms, and no one was killed. That number pales in comparison to the 750,000 who hunted the woods of Pennsylvania and Michigan ‘s 700,000 hunters, all of whom have now returned home. Toss in a quarter million hunters in West Virginia and it literally establishes the fact that the hunters of those four states alone would comprise the largest army in the world.

America will forever be safe from foreign invasion with that kind of home-grown firepower. Hunting – it’s not just a way to fill the freezer. It’s a matter of national security. That’s why all enemies, foreign and domestic, want to see us disarmed.

Food for thought when next we consider gun control.

The anonymous author raises a valid point. It’s not an original one – after all, the original purpose of the militias in Colonial America was to take the shooting skills of citizens and put them to work defending the nation. (And for the record, I did not verify the numbers cited in this email, largely because the accuracy of the data did not really affect the point I’m trying to make here.)

The only fly in the ointment I see is that our hunting population is not really well equipped to go all Red Dawn on an invading force at the border. Yes, I’m sure every patriotic American would do whatever they can to repel any invasion force. And we’re a damn sight better off with an armed populace, no matter who the enemy is – external or internal. But my worry is that we’ll be depending on a lot of guys who aren’t exactly from the Davy Crocket school of guerilla warfare.

Generalizing on the ability of all hunters to translate their existing hunting skills into a vastly different set, including sniping, close combat, and hand-to-hand combat is a fools errand. Some will have what it takes (or are ex-military and will have had some basic training at…um…basic training). Others will be so used to relying on all the little gadgets and extras that turn a basic hunting rifle into some kind of tricked-out hot rod, that they will be ill-equipped to deal with, well – combat.

Now keep in mind, I’m not trying to throw stones here, as I’m painfully aware I’m living in a glass house on this one. But since my shooting skills and training run far more towards personal defense than hunting, I see some challenges for hunters who are suddenly called upon to defend hearth and home. (On the other hand, if the wheels ever do come off, and we are reduced to living off the land, those guys will be eating venison while I’m still trying to figure out how to avoid a diet of school paste and SPAM.)

Too, keep in mind that for every Patrick Swazye and C. Thomas Howell in our Hunter Corps, there’s also gonna be a Charlie Sheen. ‘Nuff said?

There’s a huge difference between an Army and a Militia. An army is well-trained, disciplined, and designed to tackle problems from a strategic point of view. A Militia is loose, undisciplined, and designed to react to defensive situations. Think of it in acting terms as scripted versus improv on open mic night. Translation: Our “hunter’s militia” may be big, but it’s not numbers that make the difference – it’s training, skill and a modicum of luck.

I think the most significant way hunters play into the defense equation is as a deterrent against a government run amok. If we are disarmed, bureaucrats know that if push comes to shove, they can always call in the jack-booted storm troopers (that’s presuming our military wouldn’t revolt if called upon to fire on their own countrymen). In reality, gun ownership is one more check on the power of the government. And it’s a check that is critical to our freedoms – all our freedoms.

It’s been said that the 2nd Amendment is the one that insures the other nine in the Bill of Rights are never taken away from us. I believe that is a fundamentally sound argument. So…what say you? Do you think that our hunters are the last line of defense between here and tyranny?