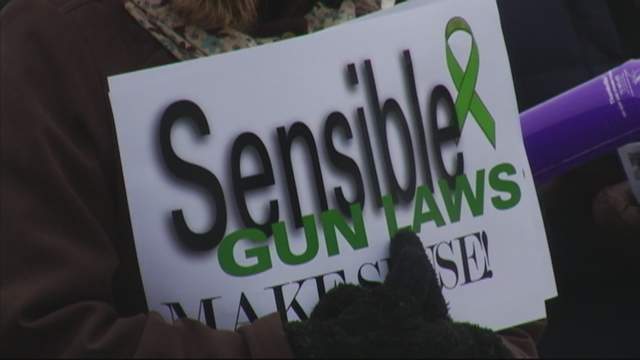 On the first anniversary of enactment of the historic NY Secure Ammunition and Firearms Enforcement Act (NY SAFE Act), Leah Gunn Barrett, Executive Director of New Yorkers Against Gun Violence (NYAGV), Assemblymembers Michelle Schimel and Brian Kavanagh, Co-Chairs of State Legislators Against Illegal Guns-NY (SLAIGNY), and other legislators (below) released a comprehensive state legislative agenda for 2014. The legislation proposed for the new session that began on January 8th is designed to build upon the NY SAFE Act, which was sponsored by Assembly Speaker Sheldon Silver and Senate Majority Co-Leader Jeffrey Klein and signed into law by Governor Andrew Cuomo, and to maintain New York’s role as a national leader on sensible gun safety laws . . .

The NY SAFE Act included crucial and widely popular provisions like background checks on all gun purchasers, a prohibition on sales of assault rifles with certain characteristics, a ban on high-capacity ammunition magazines, and other measures. As a result of these and other protections in state law, New York earned an ‘A-minus’ grade and ranked among the top 5 states in America for sensible gun laws, according to the Brady Campaign and the Law Center to Prevent Gun Violence’s 2013 State Scorecard. Notwithstanding this success, the legislation announced today would represent a significant step toward greater gun safety and raise New York’s rating even higher.

NYAGV Executive Director Leah Gunn Barrett said, “The first anniversary of the historic NY SAFE Act is an important moment to take stock of the great progress New York has made and the important work yet to be done. NYAGV and SLAIGNY will continue to work this session with the legislature and Governor Cuomo to keep our citizens, and particularly our children, safe from gun violence. We are confident that New York will continue to show other states and the federal government the way forward by passing common sense gun safety measures that will save lives.”

SLAIGNY Co-Chair Assemblymember Brian Kavanagh said, “While some seek to go backwards and undo the SAFE Act – and make it legal once again, for example, to sell guns to strangers with no questions asked, or to have guns with 30-round ammunition magazines – we’re taking our next steps forward to prevent gun violence without undue restrictions on responsible gun owners. With NYAGV, Assemblymember Schimel, and our colleagues and allies working together, I know we’ll succeed in building upon last year’s great achievements.”

SLAIGNY Co-Chair Assemblymember Michelle Schimel said, “As long as children and innocents are murdered with illegal guns, we cannot stop. Our moderate voices for sensible gun laws will not be silenced.”

– Child Access Prevention: Require the safe storage using a gun safe, trigger lock, or secure gun cabinet when a gun is not in the immediate possession or control of the owner, to prevent improper access and unintentional shooting, particularly by children.

– Microstamping: Require all semi-automatic handguns sold or delivered in New York to be equipped with a feature that imprints a unique code onto the shell casings every time a gun is fired, to assist in solving crimes and deter straw purchasers and gun trafficking.

– One-Gun-a-Month Limit and Waiting Period for Purchases: Limit buyers to one handgun a month to reduce straw purchases and trafficking, and require a ten-day waiting period before a purchaser takes possession of a firearm to give law enforcement officials sufficient time to perform a bakground check and help guard against impulsive acts of violence.

– Protection for Domestic Violence Victims: Empower emergency responders to remove firearms from the scene of a domestic violence dispute.

– Ban on 50-Caliber Military-Style Sniper Rifles: Ban the sale of certain .50 caliber rifles with very high power and long range, in the manner the SAFE Act banned the sales of assault weapons with certain features.

– Better Use of Background Checks. Require dealers to report to law enforcement when failed background checks reveal that people have attempted to buy guns they are prohibited from owning. Require gun dealer employees who handle weapons to pass background checks.

Law Center to Prevent Gun Violence Legal Director Julie Leftwich said, “The Law Center’s experience tracking state gun regulations nationwide has demonstrated that strong gun laws can and do make a difference. The 2014 legislative agenda announced for New York includes a variety of common sense measures that will help reduce the firearms-related deaths and injuries that needlessly occur in the state each year. We applaud the efforts of Assemblymembers Schimel and Kavanagh, as well as those of New Yorkers Against Gun Violence, to make the state’s already strong gun laws even stronger.”

Dan Gross, President of the Brady Campaign to Prevent Gun Violence said, “We look forward to working with our partners from New York to build upon the historic New York SAFE Act that strengthened the background check system and other gun reform laws in New York. New York has earned its ‘A-minus’ grade, ranking in the top five states with the strongest gun laws, but there is more to do to save lives. States like New York are sending a message to Congress that it’s time to pass policies, like extending background checks to all gun purchasers, that the American people overwhelmingly support.”

Senator Ruth Hassle-Thompson said, “The NY SAFE Act of 2013 was unparalleled in terms of its comprehensive measures, and it is imperative that New York State continues passing gun control and safety legislation following in the same path. As members of SLAIGNY, my colleagues and I will continue our vigilance against senseless gun violence in order to better protect the hardworking people of this state.

Assemblymember Amy Paulin said, “Today marks the first anniversary of one of the most important pieces of legislation I have had the honor to vote for, the NY SAFE Act. It is the perfect moment to applaud the work we’ve done and call for further common sense measures to protect our children, families and all New Yorkers from senseless gun violence.”

Assemblymember Carl Heastie said, “Gun violence has been a problem in our communities for far too long. Stronger gun laws will let our children and families live without the fear of random violence taking away everything they hold sacred.”

Senator Daniel Squadron said, “Last year, New York took a major step forward in passing the SAFE Act. But our work isn’t done. This legislative agenda will answer New Yorkers’ calls and fill in gaps with sensible laws – including my legislation to ban 50-caliber military-style sniper rifles and the vital crime-fighting tool of microstamping. Thank you to SLAIGNY and NYAGV, and I urge my colleagues to quickly bring these bills to a vote.”

“Last session we passed one of the strongest gun laws in New York State history, the NY SAFE Act. However, our work isn’t done. We must expand and build upon the NY SAFE Act by closing loopholes, ensuring that our children are safe, and eradicating the prevalence of illegal handguns on the streets of our urban communities. Microstamping, better usage of background checks, and child access prevention are just a few ways to ensure such safety. During the 2014 session I will continue to work with my colleagues to advocate for stronger gun legislation,” said Reverend and Assemblymember Karim Camara.

“While the passage of the NY SAFE Act was historic, it certainly wasn’t the end of our efforts to improve gun safety and end gun violence in New York. Our comprehensive agenda, if enacted into law, will save many lives. Some of these bills have already been passed many times by the Assembly – 2014 needs to be the year that the Senate, Assembly and the Governor all come together in support of these common sense bills,” said Assemblymember Jeffrey Dinowitz.

Assemblymember Ellen Jaffee said, “In the aftermath of the Sandy Hook massacre and the murders of first responders in Webster, the Legislature and Governor Cuomo took bold steps to pass the historic NY SAFE Act. The proposed legislation is a critical next step. As a longtime advocate of sensible gun laws, protecting the public’s health and safety remains a top priority. New York must continue to lead the nation in passing common sense gun laws. We owe it to our children, our families, our communities.”

Senator Michael Gianaris said, “Passing the SAFE Act established New York as a national leader in the fight against gun violence, but there is always more to be done to protect our children and our neighbors from the dangers of illegal guns. In order to continue leading the way on gun safety, we must pass common sense measures that would require stronger, more effective background checks and waiting periods between gun purchases to reduce straw purchases and illegal gun trafficking. I have fought for these sensible gun safety laws for years, and I will continue to work hand-in-hand with SLAIGNY and NYAGV to make our streets as safe as they can be.”

“While the SAFE Act was an enormous victory in the effort to protect New Yorkers from gun violence, and I am proud to have sponsored five of the bills at the heart of that milestone legislation, there is still a great deal more that absolutely needs to get done,” said Senator Jose Peralta. “Thank you to Assemblymembers Schimel and Kavanagh and New Yorkers Against Gun Violence for your tireless work in keeping this critically important issue in the public eye.”

“For too long, the gun lobby has protected gun owners from being liable for unintentional gun-related deaths, including negligent shootings of children,” said Wendy Szymanski, chapter leader of Greater NYC Moms Demand Action for Gun Sense in America. “The NY chapters of Moms Demand Action are proud and eager to work alongside NYAGV and SLAIGNY to push for legislation that will change our culture and protect our children.”