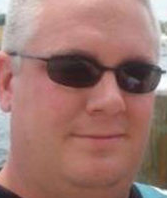 Election enraged man who posted Facebook pic of son with rifle. After a bit of introductory warm-up about the police raid on a New Jersey gun owner to “check his guns,” philly.com gets to it: the slurs and innuendos contained in the Carneys Point police report (not provided thank you very much). According the po-po, “Shawn Moore [above] was ‘ranting and waiving,’ ‘aggressive’ and acting ‘arrogantly’ when he rushed home from the restaurant March 14 to find [the cops] there, asking to look at his firearms because of an anonymous call they had received about his children’s safety. Moore later apologized for his behavior, police said, and his wife, Julie, told them he was still reeling from Obama’s election in 2008.” See what they did there? I mean, Mr. and Mrs. Moore . . .

They didn’t keep their mouths shut. You know that bit in the Miranda rights speech about “anything you say can and will be used against you”? Well it also applies even if the local constabulary don’t arrest you. As the following passage illustrates. [Also note: it’s best to say nothing about your guns to the neighbors when you’re living behind the lines in Blue State America.]

“While we were waiting, Julie stood and spoke to us stating, Shawn has not been the same person since President Obama was elected. She stated he is obsessed with gun control, owning weapons and his right to bear arms,” an officer wrote in the police report, obtained Tuesday by the Daily News. “Julie seemed embarrassed at her husband’s behavior, however, she did not seem surprised.” . . .

The police report said the anonymous caller had expressed other concerns as well, claiming that Julie Moore instructed her son to shoot “anyone who breaks in to their home” and that Shawn Moore had “issues with alcohol” and multiple DUI offenses. . . .

The police report said the anonymous caller had expressed other concerns as well, claiming that Julie Moore instructed her son to shoot “anyone who breaks in to their home” and that Shawn Moore had “issues with alcohol” and multiple DUI offenses.

“I tried to explain to Shawn that no one wanted to remove his firearms, to which Shawn rebuffed that there is legislation going through Congress to ban his firearms,” one officer wrote.

It’s only toward the end of the article that we learn Mr. Moore “is a National Rifle Association-certified firearms instructor and range-safety officer. He’s also a member of the same local sportsmen’s club many of the local officers belong to.”

The New Jersey police smear campaign is not unexpected. What else would they do but blame the victim? The CYA exercise was especially necessary given the national media exposure and gun guy blowback.

Again, though, the big takeaway from this sordid business is . . . STFU.

“How is he going to shoot an intruder if the guns are locked up?” he asked Tuesday. “The only way that would happen is if those guns were out of the safe and they were under attack by violent criminals.”