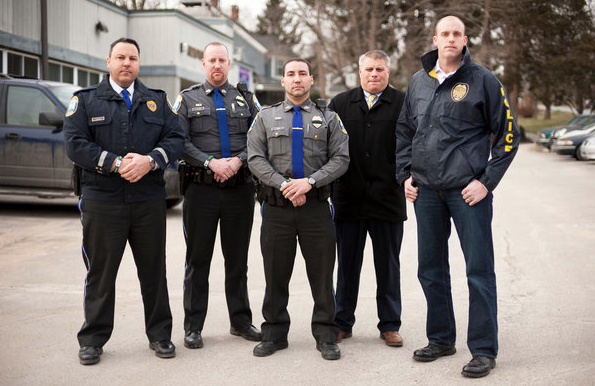 The mainstream media unleashed a maelstrom of misinformation in the immediate aftermath of the Sandy Hook Elementary School spree killing. Early reports said Adam Lanza used two handguns; he’d left a Bushmaster AR in his Honda’s trunk. There was talk of a second gunman who’d escaped into the nearby woods. Neither report was correct. Fog of war and all that. But after a high-profile news event unfolds the public needs journalism that separates truth from fiction. Especially if the story has a huge impact on public policy. It’s been over a month since the Newtown massacre. It’s time we heard details of exactly what happened. The New York Times (also available here) provides a glimpse into the details of this heinous crime from five responding officers. The account answers some questions and raises others . . .

Officer William Chapman was in the Newtown police station along with Officer McGowan and others when the first reports of shots and breaking glass came in early on the day of the massacre. The school was more than two miles away. They traveled up Route 25, then right onto Church Hill Road. “We drove as fast as we’ve ever driven,” Officer McGowan said.

They made it in under three minutes, arriving in the parking lot while gunfire could still be heard.

“I got out of the car and grabbed my rifle and it stopped for second,” Officer Chapman said. “But then we heard more popping. You could tell it was rifle fire. And it was up so close, it sounded like it was coming from outside. So we were all looking around for someone to shoot back at.”

So, contrary to speculation, the Newtown police didn’t take 20 minutes to get to the scene. It was a three-minute drive.

As the officers converged on the building, the gunfire stopped again. Officers Chapman and Scott Smith made their way to the front entrance. It was here, only minutes earlier, that a rail-thin 20-year-old named Adam Lanza, armed with a .223 Bushmaster semiautomatic carbine, two semiautomatic pistols and hundreds of rounds of ammunition, had blasted his way through the glass.

“Hundreds” is not what I’d call a precise term. My sources tell me Lanza shot a little more than 70 rounds from the Bushmaster during his homicidal rampage. Given that ammunition magazine capacity is under legislative scrutiny, it would be useful to know exactly how many rounds Lanza carried in how many magazines. Soon.

Leonard Penna, a school resource officer who had raced to the scene from his office at the Newtown Middle School, entered the school with Sgt. Aaron Bahamonde and Lt. Christopher Vanghele, through a side door that leads to the boiler room, he said. Officer McGowan and two other officers entered through a locked rear door. One of them knocked out the glass with his rifle butt so the rest of the officers could get in.

What’s the precise timeline here? When did the other two officers arrive? Did Sgt. Bagamonde and Lt. Vanghele wait for those officers? If so, how long did they wait? Were they in communication with Officers Chapman and Smith?

Was the School Resource Officer armed? With what? When did Sgt. Bagamonde and Lt. Vanghele arrive on scene relative to Officers Chapman and Smith? What weapons were the police carrying?

None of that information is forthcoming. The rest of the article chronicles some of the horrific sights and sounds the police encountered on that terrible day. And concludes with a cynical appeal for cash which, I suspect, motivated the Times’ get-together in the first place.

The officers and their union are reaching out to state lawmakers, hoping to expand workers’ compensation benefits to include those who witness horrific violence

“Our concern from the beginning has been the effects of PTSD,” said Eric Brown, a lawyer for the union that represents the Newtown police. “We estimate it is probably going to be 12 to 15 Newtown officers who are going to be dealing with that, for the remainder of their careers, we imagine, from what we’ve been told by professionals who deal with PTSD.”

Our hearts go out to everyone involved in this senseless tragedy. However, if we are to learn from the Sandy Hook massacre, we must know all the details surrounding the police response. We also need to know the school’s lockdown procedures and how, when, what and where they were implemented.

The failure of the media, politicians and police to provide those details in the face of the enormous storm of controversy the killings have created dishonors the memory of the killer’s victims.