It’s been a while since I’ve put many rounds through a dedicated race gun and I forgot how much fun and easy it can be. Plus, punching the center out of an IDPA target at 35 yards in fairly quick fire can make it look like even I know what I’m doing. The STI DVC 3 Gun isn’t race ready out of the box, it’s win the race ready right out of the box . . . The STI DVC 3 Gun will definitely turn some heads. The black Diamond Like Carbon finish is a super slick (friction-wise) and is extremely unlikely to wear off.  The golden hue of the extra-long 5.4″ bushing barrel is due to the titanium nitride coating. The slide has cuts throughout for reduced weight and to show off that barrel. While completely functional, the color combination of the black on gold is striking, without being garish. It’s a great, and all too rare, example of form following function in a competition firearm. 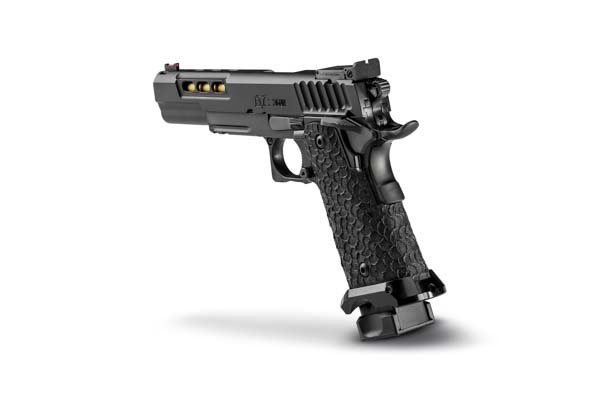 The grip feels like it’s glued to your hands, in a good way. It’s stippled for STI by a company called Extreme Shooters of Arizona. I like an aggressive grip and this one’s softer than I was expecting.

I was a little surprised that the DVC 3-Gun had so little movement in my hands. Part of that’s down to the low recoil, but the gun’s softer textured grip just melted into my palms. As with many of STI’s 2011 models, it may not be right for people with particularly small hands. If you wear an adult medium or larger glove size, you won’t have any problem getting a full grip or manipulating the DVC’s butter smooth controls. 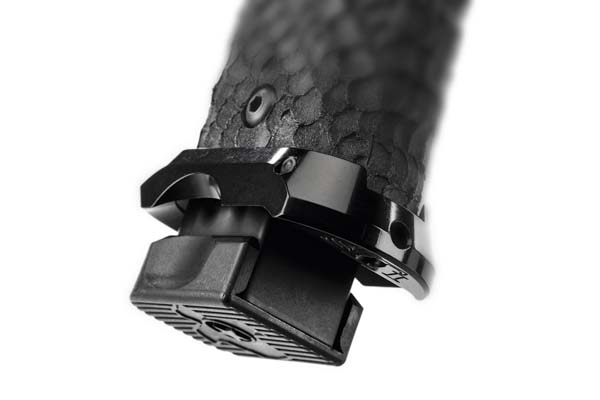 The DVC’s extended aluminum mag well — which would be damn near impossible to conceal, if you were considering it — allows for reloads that are hard to miss, even when you have your eyes on the next target.

STI sets the trigger at a scant 2.5 lbs., significantly lighter than most folks will have on their carry gun. I have the same trigger on my carry gun, also an STI, but other people shooting the gun were getting rounds off a little sooner than they were ready for. It will take some training to get used to it. Once you are used to it, those shots break with minimal movement of the gun; it’s cycled and ready to fire again with a short and positive trigger reset. To check reliability, I put a little over 500 rounds of everything through this gun. I mean everything I could get my hands on. I just dumped a mixed set of rounds, from 80 grain Ruger Polycase to 147 grain into ammo cans and loaded up whatever came out. In all of the rounds, I had one round fail to eject. The slide stayed locked forward in battery and it took quite an effort to get the round out.

Upon inspection, the primer of the 147 grain American eagle was slightly bent out, but the recoil of the round going off wasn’t surprisingly hard or a lot louder than the others. Very likely a bit of overpressure. As usual, I didn’t clean or lube the gun other than when I initially picked it up. Much like the STI Edge I shot last year, the DVC really shines when you start to pick up the pace. I had put a few hundred rounds through it, the muzzle barely moving, when I handed it to RF. He took a few shots with it before looking back at me, eyes a little wide, and saying “Wow, it feels like a .22, there’s just nothing there.” That’s a pretty accurate description.

For a comparison, I took it home and shot it against one of my Ruger Mk II’s. The DVC really does feel like the tame .22. What’s really interesting is how easy the slide is to manipulate. I could easily pull the slide completely back on the DVC 3-Gun using only my thumb and ring finger of my left hand. I actually couldn’t do that with the Mk II. Either way, the fact that this is a 9mm 2011 that can cycle as easy as a Mk II is impressive. Round choice made a significant difference in accuracy with this gun. As with two other 9mm 1911s I recently tested, the American Eagle 147 grain round didn’t do well at all, putting up a 2.75″ group from a bag at 25 yards. If this was a 3″ carry gun, that would be just OK, but for a gun this size that’s a not good at all.

However, the old standard Winchester white box 115 grain FMJ produced 1″ groups all day long, and the Team Never Quit 100gr HP Frangible round scored the same. I shot the last two about three days later than the other two. Again, the DVC hadn’t been cleaned during the entire process. A lot of you will say, “It’s not the arrow, it’s the Indian.” And you’ll be right — except for when it really is the arrow. If your goal is to win the game, play with the best tools available. Can you run a competition with a stock defensive or tactical pistol? Absolutely, and some people run them well. But take a look around at the top scores of the best shooters and see what guns are in their holsters. Probably not a lot of G19’s.

The recoil reduction and long sight radius a dedicated race gun gives you isn’t likely to be overcome by skill very often. For example, with the DVC 3-Gun, I can score a full class higher on Bill Wilson’s 5X5  drill than I can with my 4″ 1911 EDC. If you’re serious about competition, you’d be well advised to consider this pistol.

Accuracy * * * * 1/2
Like the STI Edge, this gun should be broken into two categories. The benched accuracy is excellent at 1″, but the real performance comes when you start to walk or shoot fast. How fast you can punch a lot of little holes in very small groups really shows what can be done with a gun of this class.

Reliability * * * *
I threw everything at this gun. I’m probably being way too picky to take a star off for that one (likely bad) round sticking. But I can’t prove it was a bad round, and there is perfect and everything else.

Style * * * * *
This gun strikes just the right blend. It definitely has some flair, a byproduct of its materials more than any kind of fancy finish or over the Cerakote job.

Customization * * * * *
There’s not much you can’t change on the 2011 platform if you want to. I guess it could have a threaded barrel but that would be out of character with the intended use, and man would it be long. While you can change just about everything on this gun…don’t.

Overall * * * * 1/2
At this price level, I get extremely picky. But this is an absolutely exceptional race gun right out of the box. This isn’t a cheap gun, but a thing is worth exactly what someone is will pay for it. For comparison, if I shop around for what some other shops are selling dedicated iron sight race guns, the DVC is very competitively priced. The only thing that really keeps this out of a 5-star review category is that I couldn’t get it to shoot less than 1″ groups at 25 yards, but maybe you can.

Come and shoot it! STI will be at the 2016 Texas Firearms Festival.