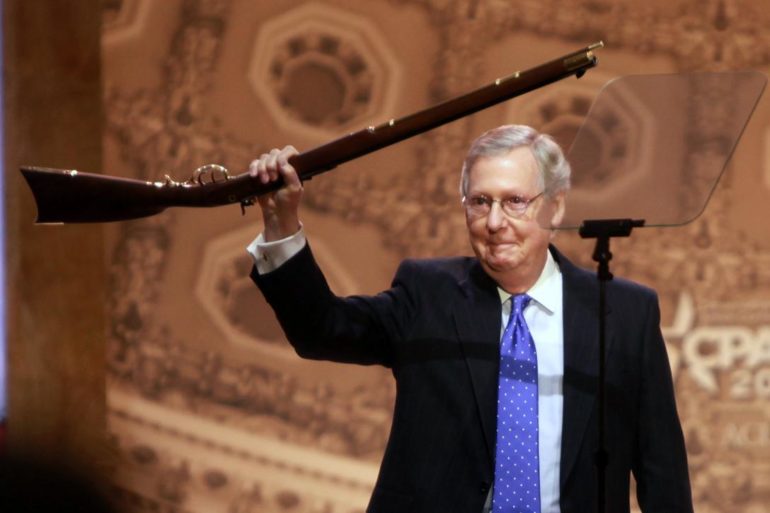 Texas Republican Senator John Cornyn introduced the Constitutional Concealed Carry Reciprocity Act of 2017 some 45 weeks ago. Three-hundred-and-twenty-three days have passed since the introduction of Senate Bill 446 on March 1, 2017. Nothing. You can thank Kentucky Republican and Senate Majority Leader Mitch McConnell . . . Sen. McConnell campaigned heavily on a pro Second Amendment stance in the Bluegrass State. The NRA’s support played a key role in his 2014 re-election, when the poli sci grad faced Democrat Alison “I Love Guns Too!” Grimes, KY’s current Secretary of State (above). In fact, Ms. Grimes challenged Sen. McConnell to meet her at the gun range.

The NRA invested heavily in Sen. McConnell, in terms of an A+ rating endorsement and campaign contributions. In terms of national reciprocity — the single most important piece of pro-gun legislation in our lifetime — that investment has yet to pay out.

As I mentioned earlier, there are an estimated 15 million concealed carry permit holders in the United States. In highly restrictive state like Hawaii and New Jersey, more would, but can’t. And millions of Americans find that their gun rights end at state borders. Perhaps there’s some other political calculus of which I’m not aware. Maybe Senator McConnell is waiting for the right moment to restore gun rights on the federal level. When would that be, exactly?

While we’re asking questions, where does Sen. McConnell stand on Americans’ Constitutional rights? Does he support the Second Amendment as writ, or did he swindle those Kentucky voters back in 2014 and the millions of NRA voters that poured their hard earned money into his campaign? We shall see.