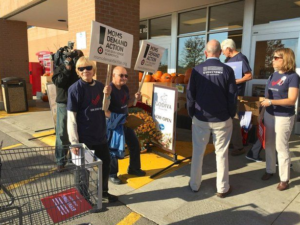 Yesterday the [diminutive] Michigan chapter of Moms Demand Action for Gun Sense in America (MDA) protested outside of a Michigan Kroger. One of the resulting articles, Michigan Open Carry says protesters at Ann Arbor Kroger off base [via mlive.com,] last night gave us a few gems. In the article the MDA rep Kristen Moore is quoted as saying . . .

Lambert questioned whether Moms Demand Action was against all weapons, or just those they could see.

Those with CPL’s had to go through much more extensive background checks and training to lawfully carry their weapon, she said.

“We’re not interested in confiscating the guns of law-abiding, legal gun owners,” she said.

According to Michigan law MCL 750.234d it is illegal to possess a firearm in any establishment with a liquor license. The main exception to that is for anyone with a Concealed Pistol License (CPL).

That’s right: MDA isn’t worried about CPL holders but they protested outside of a place where only CPL holders can carry.

As I keep saying, Moms Demand Action for Gun Sense in America doesn’t make any sense. They don’t know what they are talking about. Also, the way Michigan law works, it undermines everything MDA is trying to do.

2 – pushing stores to ban guns because we don’t know who the person with the gun is.

Well, in Michigan we have universal background checks for pistols and again, a CPL is needed to carry in almost every grocery store. So they either need to back off on the stores because everyone has had one of their background checks, or they need to admit that they are using a false dichotomy to push more background checks.