Is It Really Worth It To Upgrade Your Carry Gun’s Barrel? 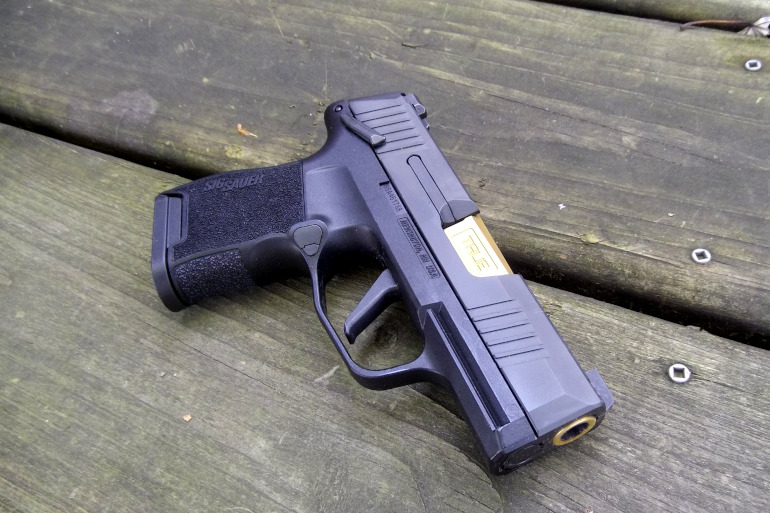 A little while back I was talking to a reader who happened to work at a gun store I pass through on occasion. We got on the topic of carry guns and he asked why I show so little love to companies that try to improve carry guns.

It’s true that I have been somewhat critical of consumerist trends that introduce liabilities, such as long range hunting and the fads that have driven unethical practices. He directed me towards a tricked out pocket pistol and proudly declared that I should review it as it was a clear upgrade from the factory model. I declined, but I decided to do my own testing.

I did some general research into this topic and found that the most frequently upgraded parts on carry guns are the barrel and the sights. I conducted some general and informal surveys over a few weeks and came out with these results.

The basic idea is that small guns are more difficult to fire due to their size and recoil characteristics. As far as carry guns go, we’re talking guns like the SIG P365, GLOCK G43, Smith & Wesson M&P Shield, and others of similar size. Compact guns like the P320, G19, and others are in this category, but are comparatively large.

Not all guns need upgraded sights. Most people I talked to who carried a GLOCKs swapped out the plastic standard sights for metallic ones, typically with night sight inserts. Most SIG owners were satisfied with the XRay night sights that come standard on most SIG models. M&P owners were split. Those guns come with metal sights, but not necessarily night sights.

Is it necessary to upgrade the sights on a carry gun? I don’t know for sure, but most people I talked to seemed to think that it was a needed change.

When I asked if it was important on guns with permanent, fixed sights like a J-Frame revolver, the answer I received was unilaterally “no.” When I asked why, the common answer was that they were ‘belly guns’ and don’t need sights to be effective, although some rudimentary sight was preferred. 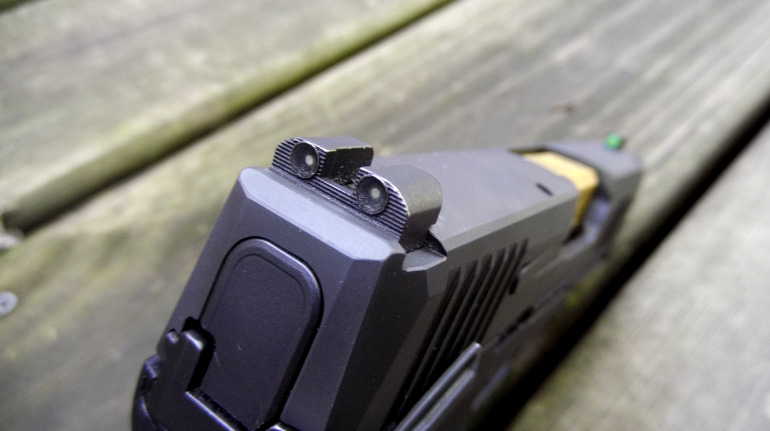 Sights aren’t as much of a question when it comes to upgrade. If there are night sights available for your carry gun, they may not improve accuracy, but they can provide peace of mind and increase function in low light. (Josh Wayner for TTAG)

I then asked why a powerful .38 Special +P or a .357 Magnum didn’t warrant upgraded sights despite the same expected usage distance as guns like the P365 or G43. I got shrugs most of the time. “They aren’t that accurate” some muttered.

While that sentiment isn’t rooted in fact, it does have a basis in practice. Most people don’t commit to mastering a 2-inch .357 with any degree of enthusiasm. That means while just fine accuracy wise, these guns never really get to shine.

Small semi-automatics are much more user-friendly, but still suffer in the accuracy department compared to their full-framed brothers just because they’re smaller and lighter with a short sight radius. This brings us to the barrel question.

Many people see it as a bonus to upgrade the barrel on a carry gun to make it ‘match grade’ or more accurate than it was when it came from the factory. Many factory barrels are considered to be of good construction, but there’s still a burgeoning market for their replacement barrels.

Is it common to wear out the barrel on a carry gun? I would dare say that few people, if any, have ever successfully worn out a pistol barrel outside of high-volume practice and competition with hot ammo.

Some competitors I know go through a pistol barrel every year and a rifle barrel every few months, but these guys are firing 50,000 to 100,000 rounds a year, which is more than many people even dry-fire their guns in a lifetime.

They typically consider a barrel worn out when it stops producing a certain degree of accuracy at a given distance. The barrel itself isn’t necessarily useless, but where it may have once shot .5-inch groups for five shots, it now shoots 2-inches at the same distance. That accuracy is fine for most people, but not for people chasing points. 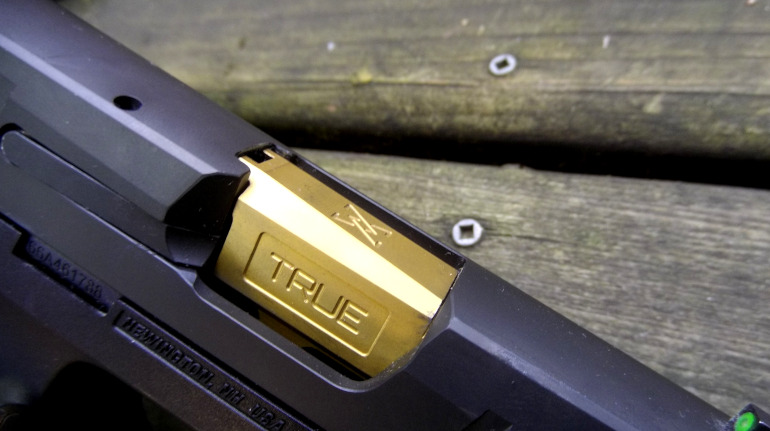 Gold may not be your color, but it does stand out on a carry gun. (Josh Wayner for TTAG)

If most people don’t ever wear out a handgun’s barrel, then I postulated to my victims that people are replacing factory barrels for one of two reasons: cosmetic preference or perceived advantage.

“It looks cool” was a common response I got and that’s a valid answer considering that nobody likes ugly guns. Threaded barrels are what I consider a functional upgrade. It is nice if they’re well made, but the added capability they offer is what’s most desirable. That said threaded barrels are a fashion statement for some these days and many people prefer the look.

But how much of a difference does it really make when you replace your carry gun’s barrel? Is there a noticeable increase in accuracy? Velocity? Is the product life better than that of a factory barrel?

This is by no means an authoritative test. If I receive a positive enough response, I will look into testing more barrels and more guns, but today we have just one to look at.

The gun I’ll be using as the baseline for this project is the SIG SAUER P365 Manual Safety model. This is a fine, accurate pistol and is one of the most accurate micro compacts made today. It is easily on par with many full-size guns in terms of mechanical precision.

For a replacement barrel, I went with a True Precision match barrel for the comparison to factory. This a great barrel and I chose mine in gold because it looks cool. This color and others are available from Brownell’s.

Why not threaded? If I went that way, it wouldn’t have been a direct comparison. The threaded barrel adds some length and a bit of velocity and I wanted it to keep things as  apples-to-apples as possible.

I tested both barrels in the P365 at a distance of 15 yards for both velocity and accuracy. Velocity below is the average of ten rounds over an Oehler 35P chronograph five feet from the muzzle. Accuracy is the average of three, five-shot groups.

The SIG factory barrel average of 11 tested loads was .97-inch at 15 yards, while the True Precision barrel averaged .81-inch. I did my chronograph testing for my SIG P365 MS article after I conducted my initial range testing, meaning that the gun at the time of testing for this article already had over 2,000 rounds through it.

The ammo I used was some of the same loads I used in my original article, and for the most part there were really no significant changes across the board. A .05-inch decrease in recorded accuracy was logged, but that’s not nearly enough to be called a real change. Overall, those 2,000+ rounds did nothing to alter the accuracy of the P365 factory barrel.

The accuracy of the True Precision barrel was great, but again not enough to be called truly superior to the SIG factory barrel in this test. The overall performance was somewhat better if decimals are considered, but the difference in the averages isn’t what I would say is enough to be a real step-up. 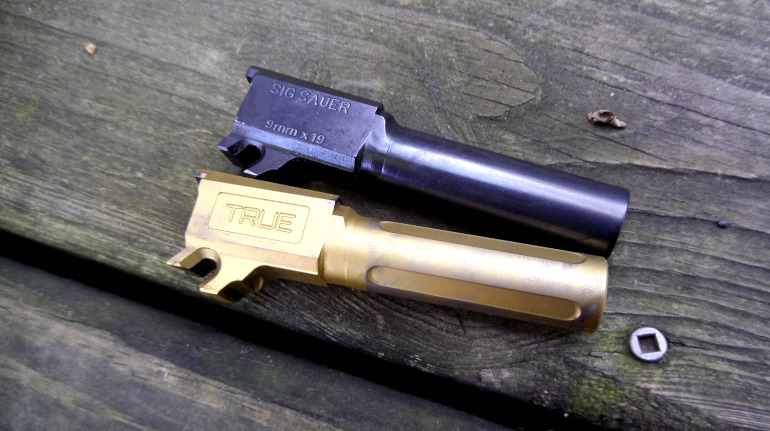 While the barrels are close, there are some minor cosmetic and dimensional differences. (Josh Wayner for TTAG)

My conclusion here is that the two barrels are, for all practical purposes, interchangeable. The True Precision barrel didn’t outperform the SIG factory barrel in any one category as the accuracy, while it was 17% better at 15 yards, that’s still only .16-inch better, or the equivalent of just under half the width of a 9mm bullet.

I love how the True Precision barrel looks, but for a carry gun it’s just not enough of a difference to justify wear-based replacement, even after 2,000 rounds. This to me is a cosmetic upgrade at this point, but it’s a good one as, like I said, ugly guns are bad.

The choice is up to you as to whether you want to bling your gun out with a new barrel. While night sights could be called a true functional upgrade for a self-defense gun, from this not-very-scientific sample size, I can’t say the same about a new barrel.

Leave a Reply to Red in CO Cancel reply

Is It Really Worth It To Upgrade Your Carry Gun’s Barrel?