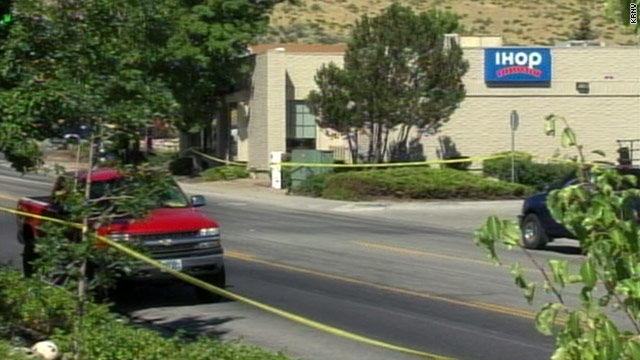 This just in, another nut-case with a gun has unleashed a flurry of bullets, this time in Carson City, Nevada. From CNN.com:

Seven people were shot after a man walked up to an IHOP in Carson City, Nevada, and shot a man on a motorcycle before walking inside the restaurant and opening fire, The Reno Gazette-Journal is reporting.

The owner of a store in the same shopping mall told the newspaper that he saw a man wearing a red shirt and black shorts pull up to the store in his blue minivan, take out a rifle and shoot a man on a motorcycle. The man then walked into the IHOP and began firing, the owner, Ralph Swagler, told the Gazette-Journal.

After shooting inside the IHOP, Swagler told the paper that the shooter then turned his gun to his store and began firing. He then pointed toward an H&R Block in the same mall and shot again.

More details, as soon as we get ’em.