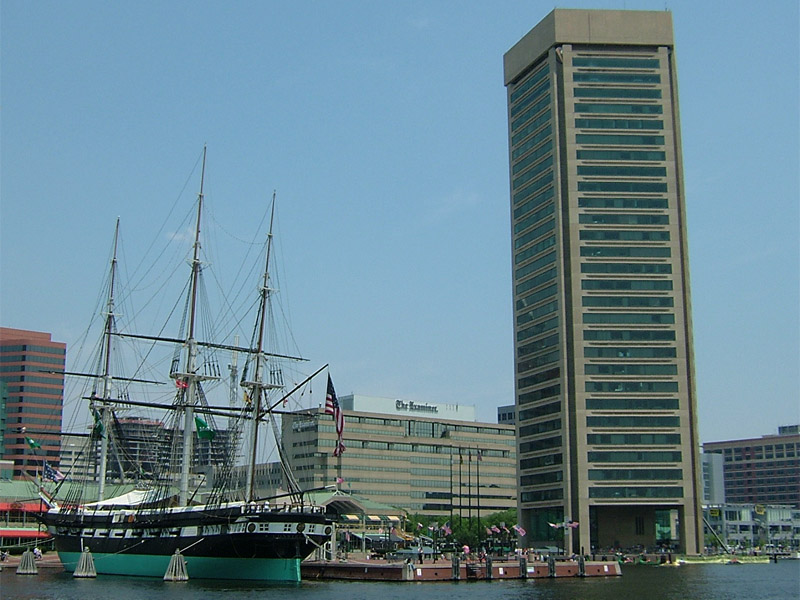 It has been hot and muggy in Charm City. The heat brought ten or twelve shootings over Father’s Day weekend, and six last weekend. The big news: someone was shot at Inner Harbor, the city’s tourist destination cash cow, just a week before Fourth of July weekend.

Baltimore has its own World Trade Center – a tall, narrow, boring building right on the water in the middle of the Inner Harbor loop. You can hardly avoid it. I used to walk around the harbor three times a week on my way to swimming and shopping, and you either go around the WTC streetside – the long way – or you take the harbor edge walkway that is more direct, but choked with tourists, strollers, couples holding hands, but not many kids with guns. ‘Til now.

As described by the Baltimore Sun, the shooting was in the shadow of the WTC building:

About midnight Saturday, brothers Keiron and Dominick Holly and friend Kesmond Harris, all teenagers, confronted another group of teens on a walkway near the World Trade Center, police said. Keiron Holly, 19, pulled out a silver revolver, saying, “What are you looking at? I want to kill someone tonight,” and opened fire, according to police reports.

The kid was only shot in the hand, and was probably a gangbanger, but this just won’t do. Like most Americans, Baltimoreans are aware that people occasionally shoot people. They don’t fret too much though because it is usually happening in the lesser neighborhoods, as in, “I wouldn’t be caught dead in East Baltimore.”

On one weekend two years ago, ne’er-do-wells had the bad manners to dump dead black men on Battery and Montgomery streets in Federal Hill, an upscale neighborhood right off Inner Harbor. They obviously didn’t understand the system, either. Instead of another easily-ignored line in the City Paper’s Murder Ink column, their lapse in judgment led to weeks of howling about city crime, and the availability of guns.

In response to recent shootings, Police Commissioner Frederick H. Bealefeld III promised again to crack down on, “bad guys with guns.” Baltimore Police have seized 50 illegal guns in the past week and 1,100 so far this year.

The moral of course, is that there is a time and a place for everything. Famous Baltimorean EA Poe would probably agree that midnight is the right time to want to kill someone, but Inner Harbor is the wrong place.