About 90 minutes WSW of San Antonio, about 20 miles from the Mexican border, sits the town of La Pryor, Texas. Well into Brush Country, everything there will bite, sting, or stick you. It’s a part of Texas I hadn’t seen before, so when Remington extended a last-minute invite for TTAG to join them on a turkey hunt, I jumped at the chance . . . Based on the friends and family who have come to visit us, it seems most people think Texas is all desert. They expect nothing but sand, cacti, and tumbleweeds. Sure, Texas has that, but it’s an awfully big state and it has a lot of not that, too. Central Texas, Hill Country, Brush Country, the various plains areas, Piney Woods (NE)…it’s all extremely green.

Between San Antonio and La Pryor and points beyond, it’s characterized by rolling hills packed as dense as can be with bright green mesquite, huisache, Spanish dagger, prickly pear, live oak, wildflowers, and more. Of course, most of it will still rip you to shreds, pretty or not. Huisache looks friendly, but is covered with two-inch spines that are so dang sharp they slip through clothes and skin like nothing. Off some sort of trail and without a big machete, this region is practically impassable. I met a large moth, which may or may not be something that bites or stings (I bet on “not” while brazenly sticking my fingers near it for photo scale purposes). When it flew in I thought it was a mentally disabled and gimpy hummingbird, it was so dang large. Turns out it’s the ol’ Manduca Quinquemaculata. No threat to my fingers. I assumed this little guy wasn’t about to bite or sting me, either. Pretty sweet black and white pattern. Chaparrosa’s La Paloma Lodge was great. Big rooms, nice dining area with a pool table, fireplace, bar, etc., and some excellent cooking (if bad coffee). They have a huge outdoor fire pit area, a 500-yard shooting range just beyond the rooms, and a pool.

Though on my visit the pool was being used by a swarm of yellowjackets — a cloud floated over it, and 30 or so at any given time were on the surface, drinking water. I’m well aware that they bite and sting, and I didn’t end up swimming. Breakfast at 5:30 and then I found myself in a blind in the dark. Gotta get out there before the turkeys do. Thankfully the weather in much of Texas in March at dawn is about as pleasant as can be. Don from Wildlife Systems was in the blind with me, calling the birds in after they woke up. Heck, he had full conversations with them. Eventually they found their way to the clearing in front of us and the largest Tom separated himself from the flock and turned to face us. I squeezed the trigger.

In the photo above, a different Tom came running over almost immediately — within 10 seconds — and started kicking the crap out of the bird I had just shot. Don’t show weakness in a flock of turkeys, I guess. With an EOTech-equipped Remington 870 DM Predator at about 30 yards, missing wasn’t an option. I pegged this guy exactly where I wanted and he went down instantaneously and never twitched so much as a single feather. A 22-pound turkey is a big bird. We’ll talk about cooking it later, but much of that has already happened and so far it has been quite the success. A bit of a dinosaur, that. Of course, while the turkeys aren’t much of a threat to you or me, they do pack a little punch with their spurs. Apparently this Rio Turkey’s just over 1.25-inch spurs (see my middle finger in the pic above) are about as big as they get in this area. If danger’s more your game, there are always the rattlesnakes, which are pervasive. This Western Diamondback was crossing the road when Don spotted it. Its biting days are over, but they didn’t end completely until maybe 10 minutes after it was dead. Taking shotgun pellets through the head didn’t stop its reflexes. The snake continued to react to being touched, including opening its mouth and moving to bite, for a long freaking time. 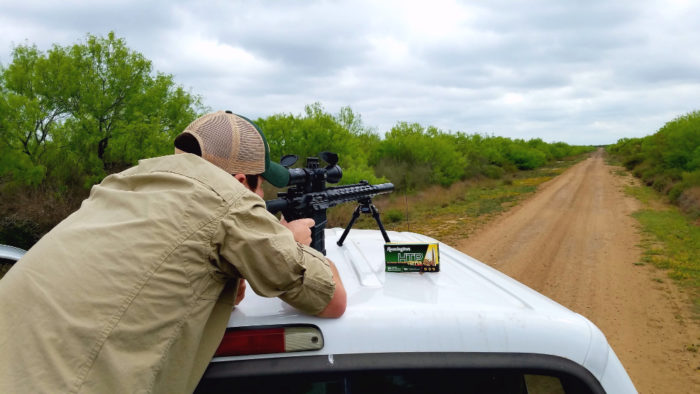 On to other pursuits, then. We drove around looking for hogs and Javelina. I was shooting a new gun from Remington Defense, details of which are under wraps for the time being.

Stalking up to the edge of a lake, we spotted hogs on the far side. I dropped prone, experiencing the issues detailed here, as Don ranged a 300+ lb hog at about 375 yards. Unfortunately, I had left my phone in the truck so I didn’t have a ballistics app or any DOPE on the Remington 700 Magpul in my hands.

In fact, this was to be my very first shot with it. I guessed two mils (checking my app later, the correct hold was 1.93), held for that and the approximately 8-10 MPH full value crosswind — which put the reticle above and out in front of the hog’s nose — and pulled the trigger.

Don heard the impact on the hog and saw him stumble slightly, but he disappeared from his small clearing into the brush. We had no means of getting around to that side of the lake at the time, but a couple days later, after I was home, I got a text to say they spotted the hog with binoculars from another angle and he hadn’t gone far before expiring. The Javelina were harder to find, and we struck out on day one. Day two, though, was lousy with the nasty creatures milling around near the roads. This little guy wasn’t much to write home about, other than a decently well-placed shot from prone at 150-ish yards. My second Javelina — you can only take two per year, despite their pest status — was more impressive. He was the biggest in his pack and had a great set of teeth on him. Yep, even these little not-pigs-not-rodents-something-in-the-middle creatures have ridiculous, nasty chompers. Though you’d have to corner one and call it mean names to incite an attack, I wouldn’t recommend hanging out with these things. If not for the teeth, then for the smell and the pests. These “skunk pigs” have a giant scent gland on their back, and they smell horrible in general and especially there. They’re also completely riddled with fleas, ticks, and other parasites. In fact, just posing behind the rifle for a photo and holding the Javelina’s mouth open for a few seconds was enough to end up with some fleas on me. That’s it for now. Stay tuned for a follow-up article on the various ways in which I’m cooking up the turkey breasts, plus another with much more information on that Remington Defense gun that took down a couple skunk pigs.