The U.S. media continues to ignore the terrible fate of Mexico’s disarmed, disenfranchised and terrorized population. The story of the attempts of civilians to arm themselves and their success when they do are buried—along with Mexican journalists. Please read this article—republished with permission from borderlandbeat.com—through to the last sentence.

Miguel Patino Velazquez bishop Apatzingán  accused Michoacan of being a “failed state, because there is no law and justice, causing insecurity, rivalry, indifference, death and oppression.”

“When there is no justice, there is no peace, no development, no prosperity, or welfare in society” and this is how we live in the state,” he claimed in a statement. The bishop argued that the presence of the Federal Police, the Army and the Navy has not been effective.

“They have increased kidnappings, abductions, murders, and user fees are widespread. Entire families have emigrated from the insecurity and fear in which we are living,” he said.

The violence, he said, is caused by a lack of authority and the complicity of various levels of government with organized crime, so there is “fear, sadness, anger and distrust.

“Society wonders why the federal forces “have not been able to discover the safe houses of the criminals and to date have not released anyone, when there are dozens and dozens of people kidnapped,” he added. 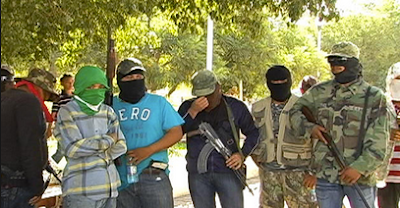 But he said: “we give them the vote of confidence and hope they have the firm intention to solve the problem.”

The bishop said criminal groups such as La Familia Michoacana, Los Zetas , New Generation and The Knights Templar mainly compete for the state like a big prize. Cartels fight around “the coast for the entry of the supplies for the production of synthetic drugs and for the drugs themselves They fight in the Sierra Madre del Sur and avocado area for growing marijuana and poppy, and for the establishment of laboratories for the production and of synthetic drugs. Criminal groups fight in/for the major cities and the entire state for the smuggling and drug trade routes, security sales, kidnappings, robberies and all kinds of extortion,” he said.

Patino reported that drug cartels force the population, mainly social leaders, to sign pacts and ask that the federal forces to do the same in Michoacan.

In addition, he said, they  threaten land commissioners who go to Congress and make the same demands. 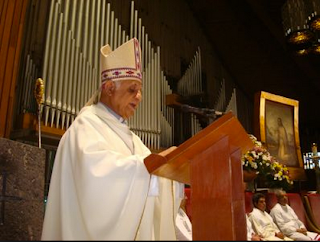 He recalled that there are six municipalities, people saw their local governments sell out to organized crime, and the inability of the federal authorities to restore the rule of law. These places have taken the initiative organize to defend themselves.

In these municipalities, he said, where they expelled the organized crime, thus quotas, extortion, kidnappings, murders and rapes ended.