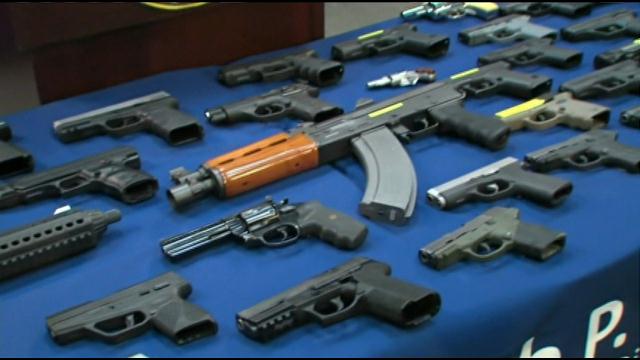 The problem with gun control activists’ stance is that it isn’t backed by any actual hard numbers. They try to massage the figures to make them more emotionally appealing, but the fact remains that virtually every statistic proves the idea that — at the very least — guns are not the problem. With public opinion shifting against them, one group has now decided to try to make it seem that the numbers really are in their favor with a website they’ve dubbed the “Gun Violence Archive.” There’s just one problem: their methodology is flawed from the start . . .

The purpose of the site appears to be the collection and analysis of firearms related incidents in the United States. It’s a noble goal, but depending on who is doing the collection and their methodology that analysis can become incredibly slanted. Let’s take a look at who is behind this site:

The Gun Violence Archive [GVA] was established to carry on the work of Slate.com’s 2013 toll of deaths by gun violence. When GVA took the reins in 2014, the mission was expanded to also look at the tens of thousands of injuries and other acts of gun violence. The overall goal of GVA is to provide the best, most detailed, accessible data on the subject to add clarity to the ongoing discussion on gun violence, gun rights, and gun regulations.

Slate.com has been one of the more vocal proponents for civilian disarmament and infringement on the civil rights of Americans when it comes to firearms ownership. So already, I’m a little skeptical of the effort. Their methodology doesn’t help.

GVA began with the goal to provide a database of incidents of gun violence. To that end we utilize automated queries, manual research through over 1,200 media sources, aggregates, police blotters, police media outlets and other sources daily. Each incident is verified by both initial researchers and secondary validation processes. Links to each incident are included in the incident report to provide further information on each incident for researchers, advocate groups, media and legislative interests.

The front page of their website (www.gunviolencearchive.org) provides a real-time count (so they say) of gun deaths (broken out to highlight “children”), injuries, and other evil uses of firearms. Perhaps surprisingly, they include a “Defensive Use” number as well. The purpose is clear: they are trying to make the argument that, on balance, there are far more criminal and tragic uses of guns than defensive uses. But the problem is that their methodology will never accurately reflect the defensive use number.

The issue is that they are depending on media reports and police blotters for their information. While that might seem reasonable to the lay person, the fact of the matter is that the disparity in the reporting of defensive gun uses versus murders and shootings is so great as to make any analysis based on that data impossible. The old admonition “if it bleeds it leads” is as true as it’s ever been, so virtually every shooting and gun-related death gets reported on the news and is reported to the police. But defensive gun uses? Frequently nothing happened. It’s doubtful that there would even be a police report about many of the incidents, let alone a mention in the news.

Let’s take that a step further. What percentage of defensive gun uses even get reported to the police? Every single person I know who has had a DGU hasn’t reported it — they simply walked away and got on with their lives, thankful for the iron on their side. The problem with the GVA’s assumption is that they believe every single DGU will be reported, and the fact of the matter is that they won’t be.

Even if the DGU is reported to the police, included in the police blotter, and then picked up by this site, there’s one more hurdle to it being accepted. “Each incident is verified by both initial researchers and secondary validation processes” they claim, meaning that only events which meet their specific definition of a defensive gun use are included in the count. What are those definitions? They don’t say, besides a vague statement:

The reported use of force with a firearm to protect and/or defend one’s self or family. Only verified incidents are reported.

That phrase — “use of force” — is what leads me to believe that they will refuse to include any DGU that doesn’t involve a shot being fired. Even their own results page backs this up, where every single DGU includes shots being fired. Not every defensive gun use ends with someone being shot, and that’s where the inherent bias in the data starts to become apparent. Not every DGU requires a shot to be fired. And even by the most conservative estimates, there are more than 100,000 annual defensive gun uses.

Assuming every defensive gun use ends in someone being shot is like assuming that only families where one child has died from malnutrition are below the poverty line.

I like data. Hard facts and good analysis are the key to any good policy decision. But the problem with the Gun Violence Archive is that it isn’t providing good data. In fact, it basically ignores half of the equation and presses forward presenting only the statistics that support their pre-determined conclusion. It is the very definition of shoddy analysis, and that I can’t abide.