Windham Weaponry is to the firearms industry what Eric Cartman is to South Park. When Bushmaster was sold off to Freedom Group and the manufacturing plant moved out of town, the local gunsmiths cried in unison “screw you guys, we’re starting our own manufacturing company!” Using the skills and techniques learned from years on the Bushmaster assembly line, Windham Weaponry set to work producing AR-15 rifles targeted for the same market that their former corporate overlords were now dominating. I wanted to see exactly how well this new company was doing, so I asked for one of their top-of-the-line models, a CDI, and headed out to the range . . .

The CDI is the token “tacticool” rifle in the company’s inventory. All of their other rifles include standard non free floating handguards and A2 or M4 style furniture, but the CDI looks like the company raided Magpul’s stockroom. Included on the rifle is an MOE grip, an MOE stock and an MOE angled foregrip, along with Diamondhead free floated handguard and sights and a nifty flash hider. It’s as close as you can get to a Chris Costa-style firearm in Windham’s catalog.

The rifle looks good on paper and has the right specs, but from the word “go” we had issues. As I was sitting in the FFL’s office filling out the paperwork for the rifle, she pointed something out on the gun: the forend rail doesn’t match. The CDI is the only rifle Windham makes with a continuous Picatinny rail that extends from the upper receiver all the way out onto the free floating handguards. The idea is that you can mount things like backup iron sights or night vision or coffee pots to the rail and it will all line up (more or less) with your primary optics. But the forend doesn’t match up with the Picatinny rail section on the upper receiver.

It may seem like a small issue, but it makes mounting optics a pain in the ass. If you have a scope that needs longer eye relief, for example, the mount might hang a little bit off the front of the upper receiver’s rail section. On most AR-15 rifles that’s not a problem, as either the rail ends at the front of the receiver and there’s nothing to get in the way or the rail lines up and allows you to slap the mount further down. But with the CDI, the mismatch in the height of the rail section means that you won’t be able to get a rock solid mount for your scope. And it also means you need to crank your front sight up just that much higher. I’ve had this issue with rifles before, and it is indeed a PITA.

There’s something else that gives me the willies about the mismatch: something isn’t in spec. If everything was being produced to specifications, everything would match. Hence the need for specifications. But because of the mismatch, that means that either the WW upper receiver is too high or the Diamondback free float tube is too low. Judging from the quality of the sights though, I’d be willing to bet that it’s Diamondback that’s playing fast and loose with the milling machine. Speaking of the sights, they seem to be meant to mimic the distinctive Troy battle sights (but in a non-copyright infringing way). They use the same diamond design, but the execution looks and feels flimsy. The sights have a bit of wobble to them, and they just feel like cheap metal. Honestly, I would have preferred if Windham Weaponry had stuck with Magpul for the sights as well.

So the various bolt-on bits and pieces don’t seem up to spec. The real test is how well the gun runs. And in terms of the mechanical function of the rifle, this thing is perfect. 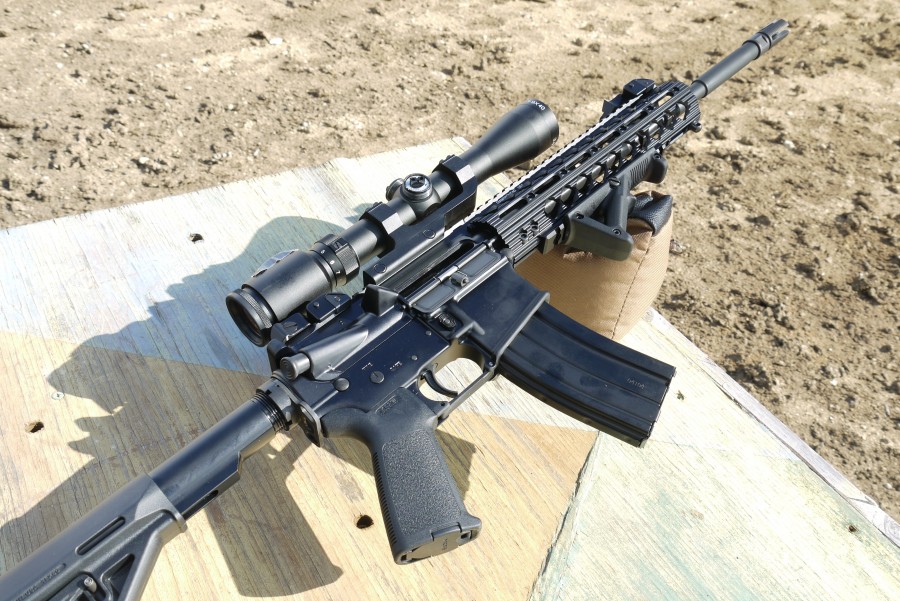 When it comes to shooting the CDI, I have zero complaints. Everything works together perfectly, and the gun (the actual gun, mind you, not the accessories) feels solid and well built. Even the trigger, which on most “mil spec” firearms is absolutely terrible, was a pretty good single stage affair. There was a small amount of creep, but nothing I’d really worry about.

When I gave the Windham guys a call to talk about the rail mismatch, I also asked them which parts where WW originals and which were farmed out. Their response was that they assemble and QC the guns, not necessarily manufacture the parts. And as far as I can tell, they seem to have chosen wisely with the guts of the rifle.

With a 3-9×40 scope on the rifle I took it out to the 100 yard range and fired some Freedom Munitions 55gr rounds through it, which is ideal for the slow 1:9 twist of the barrel. The results, though, were slightly less than stellar. This is a true 100 yard 5-round group and not the usual 50 yard prognostication. And even ignoring the high left flier, that’s a 2 MoA group if I’ve ever seen one. Compare that with the 1 MoA group we were getting with identical ammo, identical scope and identical shooting position for the Mossberg MMR Tactical.

It is entirely possible that Windham Weaponry’s lower end rifles are a better buy, but for $1,680 MSRP there are far better rifles out there. This rifle would be acceptable for someone looking for a defensive AR-15, looking to run their gun like Chris Costa in one of the Magpul videos or like they saw in Call of Duty, but there’s no room to grow. Past 50 or 100 yards you’re already talking about not being able to reliably hit a clay pigeon sitting on a berm.

Let me put this into perspective. For $40 less, you can buy a Noveske 16″ Light Basic rifle with an amazing barrel that will last for ages. The caveat though is that it doesn’t come with a free floated barrel from the factory. Or, if the free float is something you’re really needing, then for less than $200 more you can get their 16″ Rogue Hunter which is basically the same rifle as the Windham CDI (but without the AFG and sights) made by Noveske. Either one would be great for everything from 3-gun to hunting and won’t have mismatched Picatinny rail heights and will be better than a 2 MoA gun.

But the best reason not to buy this gun is the Mossberg’s MMR rifle. Basically the same setup (less the AFG), but just about 1 MoA accuracy for almost half the price.

The rifle is being shipped back to Windham for a double check, and I hope to have a follow-up report soon. I really hope that this is a lemon, but until such time as I have evidence to support that possibility all I can tell you is the truth about this gun.

Ergonomics (Handling): * * * * *
Magpul makes good stuff, and the handguards are a nice touch.

Ergonomics (Firing): * * * *
The rifle feels pretty good, even the trigger is nice right out of the box. Not perfect, but pretty good.

Reliability: * * * * *
As long as you keep it clean and lubed everything will be fine.

Customization: * * * * *
The full length m1913 rail on the top makes it easy to customize, and the ability to put more rail sections on the handguards is a plus.