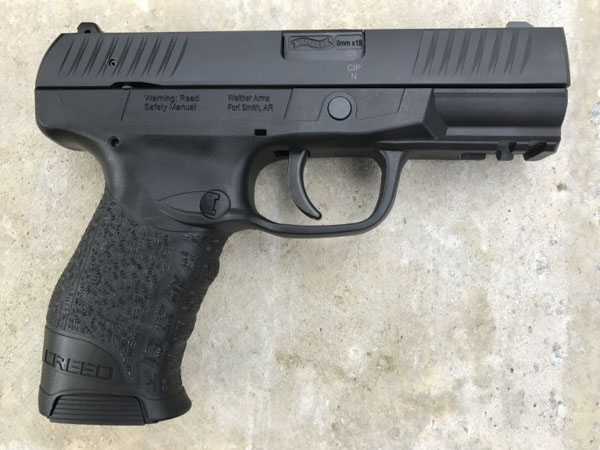 All the major handgun manufacturers make at least one full-size polymer semi-automatic pistol. Most have two. Many have more. Looking at Walther’s product catalogue, you’ll find no less than four 9mm polymer pistols with the same general weight, barrel length, height, finish and capacity. In fact, the CREED is the exact same weight, same barrel and overall length as the PPX. It also has the same finish, capacity, caliber, trigger and almost the exact same shape. So why the CREED? What’s the point? Walther made a big splash in the polymer handgun field with the $699 MSRP PPQ. It’s reliable and accurate — as you’d expect from a modern polymer piece. The ergos are outstanding. But it’s the PPQ’s bangswitch that really sets it apart; it’s generally acknowledged to be the best stock trigger on a striker-fired handgun.

Advertised as a “pre-cocked double action trigger system with a bobbed hammer,” the CREED has the same bang-switch found on the PPX ($499 MSRP). Like the PPX, the CREED’s trigger feel is similar, but not quite up to the same high standard, as the PPQ. In slow fire you’ll feel some rough spots prior to a sharp stack and break. The reset is long, about a third of an inch, and starts at the same point as the stack did on the first pull. Total trigger travel is about half an inch, but it’s only a 6.5.lb pull. Although you’ll feel all this in slow fire, you won’t notice much of it at all when the speed picks up. It’s not restrike capable.

Although the CREED’s bore axis is on the high side (equal to the Springfield XD series), its size, weight, and grip angle made for relatively little recoil. The grip itself is long and narrow, with a good amount of palm swell. I could wrap my size large paw around it until my middle finger touched the first joint of my thumb. The rear of the CREED’s frame is also large and curved and provides a lot of real estate to the web of your firing hand, further reducing felt recoil. The easy-to-reach magazine release relief is cut well into the handle. There’s no external safety.

Despite that high bore axis, the gun is pretty fast. The great grip probably has a lot to do with it. I used this review as a chance to work on my Mozambique Drill [not shown], burning almost 500 rounds for this review that way (I still suck at it). I finished with the Bill Wilson 5X5 Skill Test, scoring a 30.91 time. Although far from my best time, that’s not bad at all given the CREED’s price point.

As far as style goes, I find all striker-fired guns on the homely side. A flat black Tenifer coating covers all the CREED’s metal parts. The polymer portions are flat black with the grip moderately stippled and the CREED logo cut just above the magwell opening. There are uglier guns out there. Somewhere. But what may be less than pleasing to the eye can feel very good in the hand, and the CREED is proof of that. The trigger guard is smooth and curved. If you’re one of those odd ducks who likes to put your support hand in front of the trigger guard for leverage, this gun won’t work for you. While well positioned, the slide lock is cut almost flush against the slide and frame. I missed a few times trying to use it as a slide release in fast mag changes (and every time I tried it in gloves). Then again, that’s a technique that I continue to try, and continue to discard, reverting to the more reliable slingshot method. The simple white, large 3-dot sights are set up for fast target acquisition over bull’s-eye accuracy. There’s a good amount of space on either side of the front sight when viewed through the rear. On a pistol like this, set up for personal and home defense, that makes a lot of sense as you can see a lot of your target through the sights. Takedown and reassembly is the same as it is on so many other pistols on the market. Lock the slide back, turn down the take down lever, pull slide forward and off the frame. And no, you don’t have to pull the trigger. Reassembly is the reverse. The CREED’s reliability was a mixed bag. Over three days, I put 630 rounds of various flavors of 9mm through the gun. At no point did I clean or lube the weapon, other than running a bore snake trough the barrel and spraying a little Rouge American Apparel’s Diamondback Gun Oil through it prior to shooting. I had one strange failure to return to battery with a 115gr Blazer FMJ canting diagonally and getting stuck prior to entering the breech.

I also had two failures to completely return to battery with 124gr Blazer FMJs. In both cases a quick push with my firing thumb drove them home. Three malfs in 630 rounds ain’t bad. But that’s two different types of malfunction with two different rounds using factory magazines, so we aren’t looking at perfection. The gun didn’t malfunction with any of the 90, 115, and 124gr hollow points I ran through it.

As far as accuracy is concerned, the Walther CREED is an average performer. Three different shooters shot four-inch five-round groups off a bag at 25 yards. I was getting 2.5-inch groups from the kneel at 15 yards. I was hoping for better, but even before I got to the bench I knew that’s where it would end up. My standing firing drills at 25 yards were getting me pretty wide groups, and my 50-yard standing shots on half-size silhouette just weren’t happening at all. I tested for accuracy after 500 rounds of shooting, without cleaning the gun.

Some will wonder why this pistol exists when there are already so many similar product out there. The reason is simple: the CREED is inexpensive, shoots minute of bad guy and feels good in the hand. For the vast majority of people looking for an affordable home defense pistol, the CREED is just about as good as anything they’ll be comparing it against for $50 to $100 less. That’s a recipe for success.

Style * *
The CREED isn’t a looker. And it doesn’t hide the fact.

Customization * * *
You could replace the rear sight and you can hang accessories from its rail. The front sight is fixed, the controls aren’t ambidextrous, and the palm swell is what you get. You like black? It comes in black.

Reliability * * *
A few problems with two different grain FMJs using factory mags. Nothing catastrophic, and they all happened in the first 300 rounds.

Accuracy * * *
The CREED turned out four-inch five-round groups at 25 yards. That’s (just) acceptable range for a 9mm pistol of this size.

Overall * * *
The Walther CREED offers good ergonomics, an OK trigger, OK sights, OK reliability and OK accuracy — at well under $400. It’s not the new Wonder Nine you have to have, but it’s a good gun at a great price. Perfect for the budget conscious new shooter looking for a more-than-merely-adequate home defense pistol.