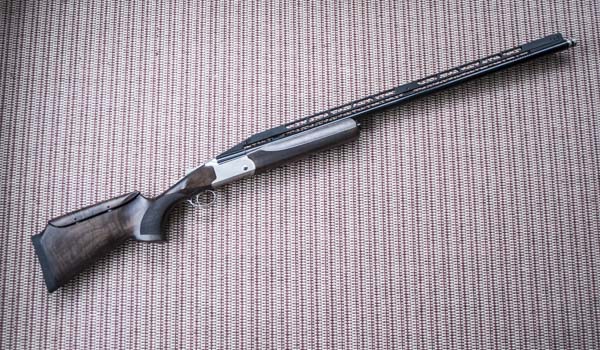 Trap shooters are an odd lot. While every kind of shooting has its own variations of guns and equipment, trap devotees and their tools seem just a little more out there than most. Whether it’s the glasses, the gear or the extra-long barreled smoothbores, shooting trap is its own animal. So when TriStar announced that they were introducing a new line of reasonably priced, nicely equipped dedicated trap shotguns, it was good news for those who like to bust clays but don’t have the cost of a used Kia to lay down on a gun . . .

Wait. It’s a single barrel shotgun, you say. What’s the big deal? The big deal is the price for the features the TT-15’s pack. The phrase ‘inexpensive trap gun’ has always been a contradiction in terms. There’s nothing stopping you from shooting trap with a venerable Remmy 870 or Mossy 500. But if you get far enough in the sport and want to buy yourself a true trap gun, the price of admission for a new gun these days is no less than about $1500 – and escalates very quickly from there. So when you add up what the TT-15 gives you — features like a fully adjustable comb, raised adjustable rib, and fiber optic sight — you’re looking at a price tag of at least two grand.

The Turkish TriStars start at $1190 MSRP for the top single (as tested). Add another $75 for the unsingle version. If you shoot doubles, the over-under will run you $1350 and to do it all, the unsingle – over/under combination package is a relatively paltry $1725. Subtract about $200 to get the going street price of each.

Holy piggy bank, Batman! That’s still an awful lot of samolians, you say? Not if you look at similarly configured trap guns on the market. The TriStar guns feature nicely figured Turkish walnut stocks and fore ends. It’s not A grade wood and isn’t finished like it either. But the satin finish is well done and the grain is attractive. Checkering is cleanly cut and effective. Trap’s a rising target game so most shooters like to see a good percentage of the bird above the bead. How much? That varies, but the good news is, the TT-15 gives you a lot of options to, as Burger King used to say, have it your way. The gun comes with an Allen wrench and washers to adjust the Monte Carlo stock for drop and comb as well as cast on and cast off. Adjustment is a simple matter using the Allen wrench and as many washers as you need to adjust comb height. Fitting the stock is a simple matter.

The other variable the TT-15 gives you to control is the three-position high rib. Tilting the rib to your preference is an easy process of inserting something (I used a thin allen wrench) in the sprung connectors on both ends of the rib to release and tilt it as needed. The front sight is an red/orange fiber optic affair that stands out well. I’d have liked to have a mid bead on that high rib, but TriStar didn’t include one.

You’ll want to invest some time in patterning the gun when you adjust the rib to make sure she’s shooting where you want her to. The only fit variable the TT-15 doesn’t allow you to change is length of pull. All three guns have a 14 5/8″ LOP. The nickel finished receiver has just enough engraving to add some interest and a little flair. Fit and finish are nicely done, with clean wood to metal joining, especially for the price point. One thing to watch: while the TriStar supplied chokes fit the TT-15 and my other Beretta/Benelli Mobilchoke gun (and they patterned well), I had trouble getting a Briley choke in the TT-15. It fits, but only just. It seems the TT-15’s barrel — at least the one I tested — is a hair narrower than spec. The TT-15 does what it’s supposed to do on the trap field — powder orange clay disks.

One hiccup: the ejector. Or is it an extractor? My money’s on ejector. About 60% of the time, the TT-15 launched spent shells over my shoulder as most smoothbores do. The other 40% of the time, the gun only extracted them. That’s actually my preference…I’d rather not have to pick shells up when I’m finished. Still, the gun should do one or the other all the time. If you’re a trap shooter, this probably won’t be your ultimate shotgun. The TriStar TT-15 is a good step-up gun. A shotgun you buy your kid or yourself once you decide you really do love trap and want to move up from a sporting or hunting gun to get more serious in the sport.

Could you shoot the TT-15 long term? Probably. Dedicated trap shooters tend to run thousands of rounds through their guns a year. While there’s no way, given the limitations of a review, to know if the TriStar will hold up to that kind of long term use, I saw nothing to lead me to believe it won’t.

Style: * * * *
An attractive, classic trap gun with nicely figured walnut, some strategic engraving and miles of blued steel. You won’t look out of place at the trap club.

Ergonomics: * * * * *
With a fully adjustable rib, palm swell, and customizable stock, the TT-15 will accommodate any (adult size) shooter. The only thing missing is length of pull adjustment.

Customization: * *
No. Then again, there’s almost no reason to. The TT-15 has just about everything you’d want short of LOP adjustment or maybe a release trigger. If you’re not happy with the chokes TriStar included, the TT-15 takes Beretta/Benelli aftermarket Mobilchokes (though snugly).

Overall: * * * *
TriStar’s hit a home run with the value-priced TT-15. The new line gives budget-minded shooters a fully equipped, extremely capable trap gun at a very affordable price. The balky ejector and snug choke fit are notable, if not deal breakers. If you’ve been looking for a way to get into the sport without securing a second mortgage, this is a great way to do it.