You gotta hand it to Smith & Wesson’s marketing mavens. It takes serious stones to enter the .22’s-that-look-like-Lugers market decades late, facing not one but two well-established players, and declare victory. So, does the Smith & Wesson SW22 Victory smell like victory (in the morning)? Or is Smith’s entry-level .22 a pyrrhic pistol? The SW22 looks like the lovechild of a Ruger Mark X series and a Browning Buck Mark pistol. Not there’s anything wrong with that. Predating the 1911 by a decade, the Luger design survives as one of the classic shapes in all of pistoldom. 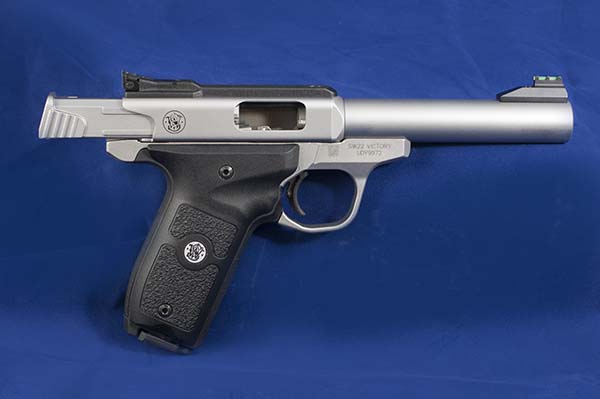 Whereas the Ruger Mark series’ uppers maintain the barrel’s rounded shape from stem to stern, the Victory goes with the Buck Mark’s squared-off back-end. The main difference: the Smith’s indented and exposed loading gate. Open, it gives an excellent view of the chamber. Closed, it ruins the lines and looks cheap. Ergonomically, the SW22’s grip is a gripe. The handle’s front and rear checkering is about as aggressive as a Xanax-fed dairy cow. The SW22’s side panels are only slightly more tacky; reminiscent of nothing so much as well-used sandpaper. Sweaty-palmed pistoleros need not apply. Make than can not apply.

Luckily, but not without cost and delay, you can remove the Victory’s slick side panels via two screws and swap them out for something (i.e anything) more griptastic. It’s too small to rest your thumb on top of its striated surface and it’s too easily activated to rest your thumb underneath it. Two shooters attempting to grip the Victory as high as possible flicked the safety on in the middle of a string. Hilarity did not ensue.

Yes, the Victory’s frame-mounted safety isn’t dissimilar to the competition. But in these days of endlessly ergonomic polymer pistols, it’s an unnecessary late-to-the-game loss on the ballistic battlefield. On the positive side — the left side — the SW22’s textured, steel-reinforced polymer mag release is perfectly positioned and springy as hell. The Victory comes complete with two ten-round mags. They practically leap out of the magwell; I reckon you could use them for self-defense. The Victory’s mag safety is also the right answer, given the pistol’s natural milieu as a beginner’s gun.

The main complaint against ye olde Ruger and Buck Mark .22’s: they’re a bitch to clean (the Ruger infamously so). The Victory comes apart with a simple turn of a screw just underneath the barrel, forward of the trigger guard. Yes, well, the latest Ruger has a PHEV (Press Here Et Voilà) button. Ah, but . . .

Unlike the Ruger, the Victory’s frame is the serialized bit. New Ruger barrels are an FFL to FFL extravaganza. SW22 Victory barrel? You’ve got mail! (FYI same deal for the Browning Buck Mark.) Swapping Victory barrels is like a one night stand: one screw and you’re done.

The Victory leaves base with three models: the stainless steel version tested, a slightly more expensive model with a threaded barrel, and an again more expensive pistol with a Kryptek finish. But wait! Here come the reinforcements! 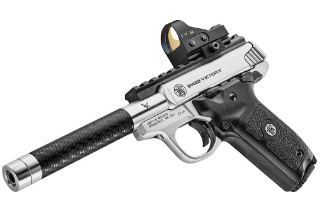 The precision shooting peeps at Volquartsen have produced some pricey but fly barrels for the SW22 Victory, ready to ship. You can pony-up $215 for a lightweight THM carbon fiber tension barrel (above) or ding your plastic for $295 and buy an I-fluted SS barrel with forward blow comp.

Volquartsen’s also ginned-up a range of $150 psychedelic wooden grips that totally eliminate the thumb/safety position problem. Or, jump over to TANDEMKROSS for a whole line of SW22 hop-up parts including replacement grip panels, SuperGrip traction enhancement, and much more.

The best bit of the SW22: the adjustable trigger.

The Victory’s textured two-stage go-pedal is as crisp and clean as a freshly laundered shirt. It breaks like the proverbial glass rod after a scant 3.5 pounds of pressure. Those who’ve [rightly] slagged Smith for their gritty & graunchy M&P triggers will find their happy place touching off rounds with the Victory. Green fiber-optic three-dot sights sit atop the Victory’s slide. As you’d expect for a target pistol, the rear’s adjustable for windage and elevation. A good thing, too. Our Victory started life shooting high right.

With an eight-inch sight radius and plenty of air on either side of the front sight, bringing the SW22 on target is child’s play. Or . . . . . . mount your favorite optic on the SW22 using the picatinny rail that ships with the gun. The rail features a notch on the end; you can aim using the rear site on its own, sans optic. And you can remove the front sight entirely. Very thoughtful. With all these interchangeable bits and pieces, you’d be forgiven for wondering about the Victory’s accuracy.

Shooting 25-yards free-hand at The Range at Austin (closed course, non-professional shooter), my average group size clocked-in about about 2.5 inches. A little less if you discount frequent-flyers.

While this is not the high-level .22 caliber competition gun beginners may [someday] be looking for, it’s about what I’d expect from an mass-market entry-level 36-ounce .22 caliber pistol with a 5.5″ bull barrel. 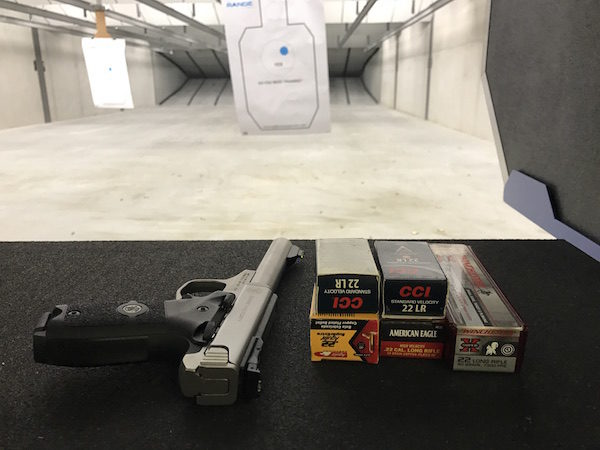 The Victory is not a finicky beast. The SW22 got a [soft] kick out of CCI Mini Mags, Federal Premium, CCI, Winchester bulk packs and Remington Thunderbolts. In all this confusion, I forgot which round delivered the best accuracy. But forgetting was a lot of fun. And all fired flawlessly.

As $400 MSRP, the base model Smith & Wesson Victory undercuts its competition. The “extra” Benjamin or so you save for not purchasing a Ruger or Buck Mark would go some way towards buying the [not] slick stuff that would improve the SW22 by a large margin.

Does the Victory take the field? The SW22’s barrel-swapping opportunities certainly outflank Ruger — who return the favor with their one-button-to-clean-it-all design. But it’s the Victory’s lacklustre ergos that ultimately deny the gun the battlefield domination Smith seeks.

Ratings (out of fives stars):

Style: * * * *
An ageless design with an attractive, utilitarian aesthetic. Not in love with the frame’s right side.

Ergonomics: * * *
Why-did-they-bother front and rear checkering and slippy grip deny sufficient purchase, especially in hot weather. The safety is not my friend.

Customize this * * * * *
Hell yeah. Swapping barrels is a snap and there are a ton of aftermarket options available now and more on the way. Volquartsen and TANDEMKROSS makes it party real.

Overall: * * * *
The Victory is an excellent opening salvo: well-priced, crisply triggered and easily cleaned and customized. With a grippier grip and a safer safety, it would be ideal.