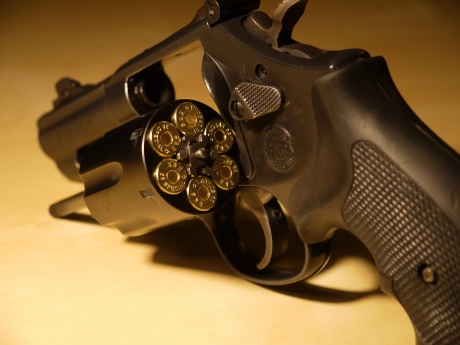 My interest in shooting doesn’t stop at the 50-yard line. It begins there. I consider pistol shooting a necessary evil: a component of 3-gun competitions that I have to get through to get to the fun stuff. So when it came time for me to buy a pistol for competitions, I went for a “safe” choice: the SIG SAUER p226 9mm. Revolvers weren’t on my radar. Not for competition. Not for self-defense. Not for fun. And then, over the past year, I’ve been exposed to a number of pistols that have opened my eyes to the joys of the wheelgun. None more effectively than the Smith & Wesson Performance Center 67-5.

Aesthetically, the Smith & Wesson Model 67-5 or “Carry Comp” is a genuine classic. If you can’t see it, you never will. If you do, it only gets better with age. For me, a gun’s beauty lies in its performance. A functionally perfect machine may never find its way into an art museum, but in my world, it deserves its own gallery. So . . .

Holding the Smith & Wesson Performance Center Model 67 Carry Comp in your hands, you feel an immediate difference between Springfield’s revolver and SIG’s semi. The SIG looks danger sharp on the outside. But there’s this little wiggle in the slide reminding you that the gun was mass produced. You can shake the Smith & Wesson Performance Center 67-5 all day with nary a rattle. Everything on this gun is solid, from the Patridge sights down to the glass smooth trigger. 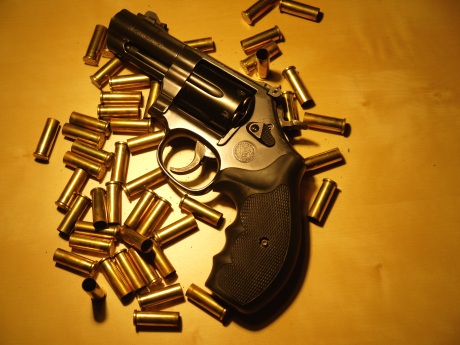 Compared to the p226, the 67-5’s sight radius is about 3/4 as long. While the Smith’s accuracy is slightly diminished, the sides of the rear sight are far sharper. The two components of the open sights are closer together; they’re almost in the same “focal plane” (the closer the two components, the sharper they are). Here’s an image illustrating the point. The Smith & Wesson Performance Center 67-5 revolver is on the left, and the SIG SAUER p226 on the right. 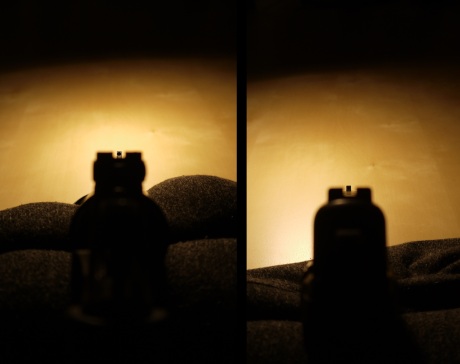 My trusty SIG’s been an acceptable range partner for well over a year. It’s never malfunctioned and I generally hit where I’m aiming. Much like the family minivan, I excuse its shortcomings because it does its job so well. Loaded with Sellier & Bellot .38 Special ammunition lovingly provided by our friends at LuckyGunner.com, I test fired the Smith at the NRA Headquarters Range in Fairfax, VA. The 67-5 didn’t just “do the job.” It excelled.

TheCarry Comp’s trigger accounts for much of the revolver’s stellar performance. In single action, there’s no trigger slack whatsoever. The break that follows a gentle squeeze is as clean as an OCD’s underwear drawer. In makes the SIG’s single action go-pedal feel like a two-stage trigger.

As you’d expect for a revolver marketed as a carry piece, the 67-5’s double action trigger is significantly heavier than single action operation. It’s almost twice as heavy as the SIG. Shooting the Smith accurately requires an extremely long, strong and smooth trigger pull. In this, the Smith’s ergonomics are your friend. The gun is slightly nose heavy. Better yet, the 67-5’s molded rubber grips enhance the gun’s “fit and feel” while reducing felt recoil.

To test the 67-5’s in hand accuracy, I fired four strings of 12 rounds at a target placed 20 feet away. To compare the effect on accuracy for the 67-5, I fired the first string in single action, the second in double. I used the SIG SAUER p226 as a control. Astute readers may notice that there’s only one target. The target I perforated with the SIG in double action was too embarrassing to post.

You may have noticed that the Smith is ported. I have some ported rifles which vent to the side, but the 67-5 vents the gasses straight up. The big question: why? How many people complain about the kick of a .38? Even so, I believe the 67-5’s port helped keep the gun under control and allow for quick follow-up shots.

The top ported barrel seems to be a cause for concern amongst a number of other reviewers. One reviewer believed that the 12 o’ clock port would cause some nasty burns to the shooter if they were in a close quarters situation, holding the gun at their side. I’m more inclined to believe the cylinder gap would be more of an issue in that situation (and really can’t fathom how a top ported barrel could injure someone’s side any more than a normal muzzle blast).

In addition, some gun gurus question whether the top port means that more of the flash will be in the shooter’s line of sight, damaging their night vision. Keep an eye out for an upcoming experiment testing this hypothesis. So to speak. The model 67-5’s solid stainless steel construction also minimizes recoil. When empty, the Smith & Wesson .38 weighs 25 ounces. That’s more than the SIG P226 with a full magazine. The revolver’s just as long and tall as my semi. With practically identical weights and dimensions (even the bullets weigh the same), the comparo presents us with an interesting choice: carry the SIG with three times as many rounds as the .38 Special, or . . . what? Reliability?

For me, that’s the Model 67-5’s fundamental flaw: it’s a revolver. Revolvers have never liked me; a Mateba took a chunk out of my thumb thanks to a six o’ clock chamber position and some poor thumb placement. Getting a good grip on something that vents gases all over the place is hard for someone with big hands like me.

Having a break in the barrel seems like lazy design work in this day and age. In a world where the Nagant 1895 revolver is in existence, there’s no need for the cylinder gap to keep appearing in designs (the Nagant’s cylinder actually moves forward to close the gap before firing).

Revolvers are practically useless in competitions. They’re hard to reload and offer limited capacity. The Smith & Wesson’s double action pull is also extremely heavy. I can happily shoot my Sig p226 in double action all day long. Shooting the 67-5, I became thankful that the cylinder only holds six rounds, allowing my trigger finger some much need R&R.

At this point, I feel obligated to report that there’ve been some reports of Model 67s with less than 800 rounds lunching their barrels dowrange. Then again, the Internet’s a generally dangerous place for reliability-focused buyers. I’ve seen similar reports about Glocks and even 1911s. Fortunately, S&W offers a lifetime warranty on all its guns—provided you’re alive to use it. In the end, the 67-5 is a fantastic range gun. It’s a hoot to shoot. It’s more accurate than I will ever be (with a handgun). It oozes class and evokes images of detective stories. I wouldn’t begrudge someone carrying one, especially compared to a hard-to-control flyweight snubbie. But there’s a reason semis have elbowed aside wheelguns. In this case, it has nothing to do with accuracy or style. ‘Nuff said?

Ergonomics * * *
The grip is comfortable in the dominant hand, but where is the support hand supposed to go?

Customize this *
There’s nothing left to do. The gun comes pimped out from the factory, and I haven’t been able to find a single website offering aftermarket modifications. S&W does, however, offer gunsmithing services for Performance Center firearms . . . for a fee.

Overall Rating * * * *
It’s a great gun for the range, but taking into consideration home defense and concealed carry scenarios I think I’d prefer something that isn’t a revolver.

All images courtesy of Nick Leghorn for TTAG