Smith & Wesson introduced their J-frame revolvers to the world in 1950. The Chief’s Special – later, the Model 36 – became a popular gun for concealed carry because of its small size and lightweight design. Over the decades, other models have evolved from the original Chief’s Special design, including the lightweight Model 360 in .357 Magnum.

Weighing in at a mere 14.9 ounces (or 0.93 pounds), the gun truly lives up to the “Airweight” moniker engraved on the right side of the frame. Don’t let that fool you, though, because the gun is solid and stout. The frame is made of a Scandium alloy that’s light, but incredibly durable, and the cylinder is made of corrosion-resistant stainless steel with a PVD finish. 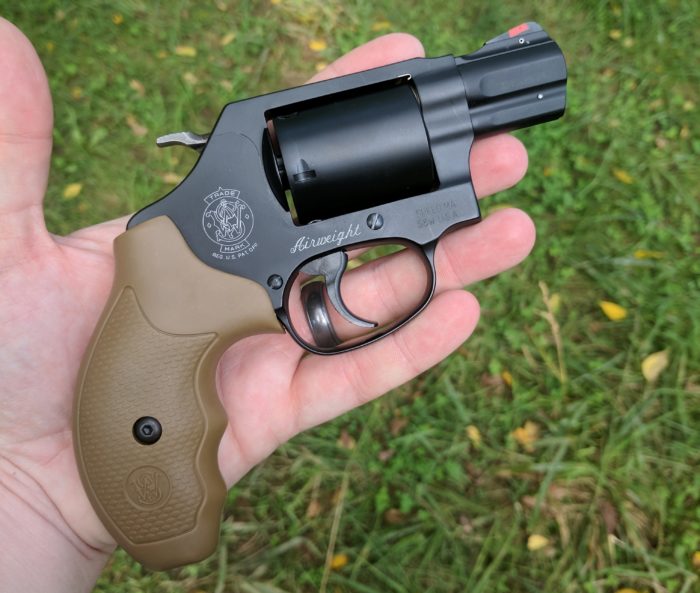 The synthetic combat grips are slightly longer than the normal grips you find on J-frame revolvers. Obviously, this adds a bit more surface area to the gun’s overall footprint when it comes to concealment. But that’s a trade-off I don’t mind making when it comes to this particular gun. The extra real estate helps when you touch off a .357 round from this lightweight revolver.

The Model 360’s all-black finish and smooth, un-fluted stainless steel cylinder are accented by the Flat Dark Earth combat grips and a red ramp front sight. Generally, I’m not a fan of un-fluted cylinders, but this combination makes for an attractive gun. Comparable in size and weight to the Model 638 J-frame that regularly I carry, the Model 360 feels good in my hand. Again, part of this is, I’m sure, is due to the size of the grip. When my pinky has a place to rest, I’m a happy shooter. The red ramp front sight is also a nice touch, as it makes target acquisition easier. Any help that can be lent to the traditionally small and unadorned sight picture of a J-frame is a welcome addition. Also as expected, the gun handles .38 Special ammo like a champ. I put 150 rounds of Federal, Blaser, and Remington ammo through the Model 360 with no issues. Round nose or hollow point, it made no difference to a wheel gun.

The gun grouped nicely and gave me confidence in using it for self-defense purposes. For reference, the target in the photo was shot at self-defense distance (seven yards) with Remington 130-grain FMJ ammo. The red circles are 3” in diameter. Then came time to really put the gun (and my hand) to the test. I loaded up the 360’s cylinder with .357 Magnum rounds and took aim. The result was a sight to behold.

The 360’s lightweight design creates a substantial amount of recoil…no surprise there. The boom was also accompanied by a sizable muzzle flash. What was not a sight to behold was the target. I missed completely on my first shot, with the errant round lodging harmlessly in the large shooting berm. The Model 360 is a fierce little gun when loaded up with magnum rounds, but that’s to be expected in a gun that weighs less than a pound and is designed for easy concealment. That extra length on the grip comes in very handy when shooting heavy loads through this revolver. You’ll be glad you’ve got that extra bit of room for your pinky finger. I used an assortment of target and self-defense ammo in my range testing and the Model 360 accepted the challenge with ease. Truth be told, my hand took more of a beating that the gun did. Firing 100 rounds of .357 Magnum was much more challenging for me than it was for the snubbie. Thankfully, most time at the range with this gun will be spent shooting .38 Special rounds. Occasionally, a few cylinders of .357 Magnum are a good idea, just to remember what it feels like. This revolver fits the concealed carry bill perfectly. It’s designed to be carried unobtrusively and a lot, but (hopefully) only shot a little.

Countless law enforcement officers and civilians alike have trusted their lives to J-frames over the decades. The new Model 360 is ready to take on that role as well.

Reliability * * * * *
It went bang, each and every time, with different kinds of ammo. It’s a J-frame after all.

Ergonomics * * * * *
I really like having the slightly longer grips. They’re definitely a big help when firing .357 Magnum rounds, but the gun still beats the hell out of your hand. That said, not once did I feel as though I didn’t have a good grip on the gun.

Customize This * * *
S&W’s J-frame revolvers have been around for 68 years. Customization is endless for this gun, but there’s not much you’ll really want to do to it, short of a trigger job.

Aesthetics * * *
The matte finish, FDE grips, and un-fluted cylinder are, to me, unconventional. It took some time for me to warm up to it aesthetically.

Overall * * * *
Does the world really need a Scandium alloy frame snubnose revolver in .357 Magnum that weighs less than a pound? No, not really. Are there plenty of other guns that will get the job done just as well with less punishment on the shooter’s hand? Yes, without a doubt. Are there people out there who will buy the 360 and shoot .357 through it exclusively to prove a point to someone they don’t even know? You better believe it. This gun may not be for everyone, but it’s certainly for someone.