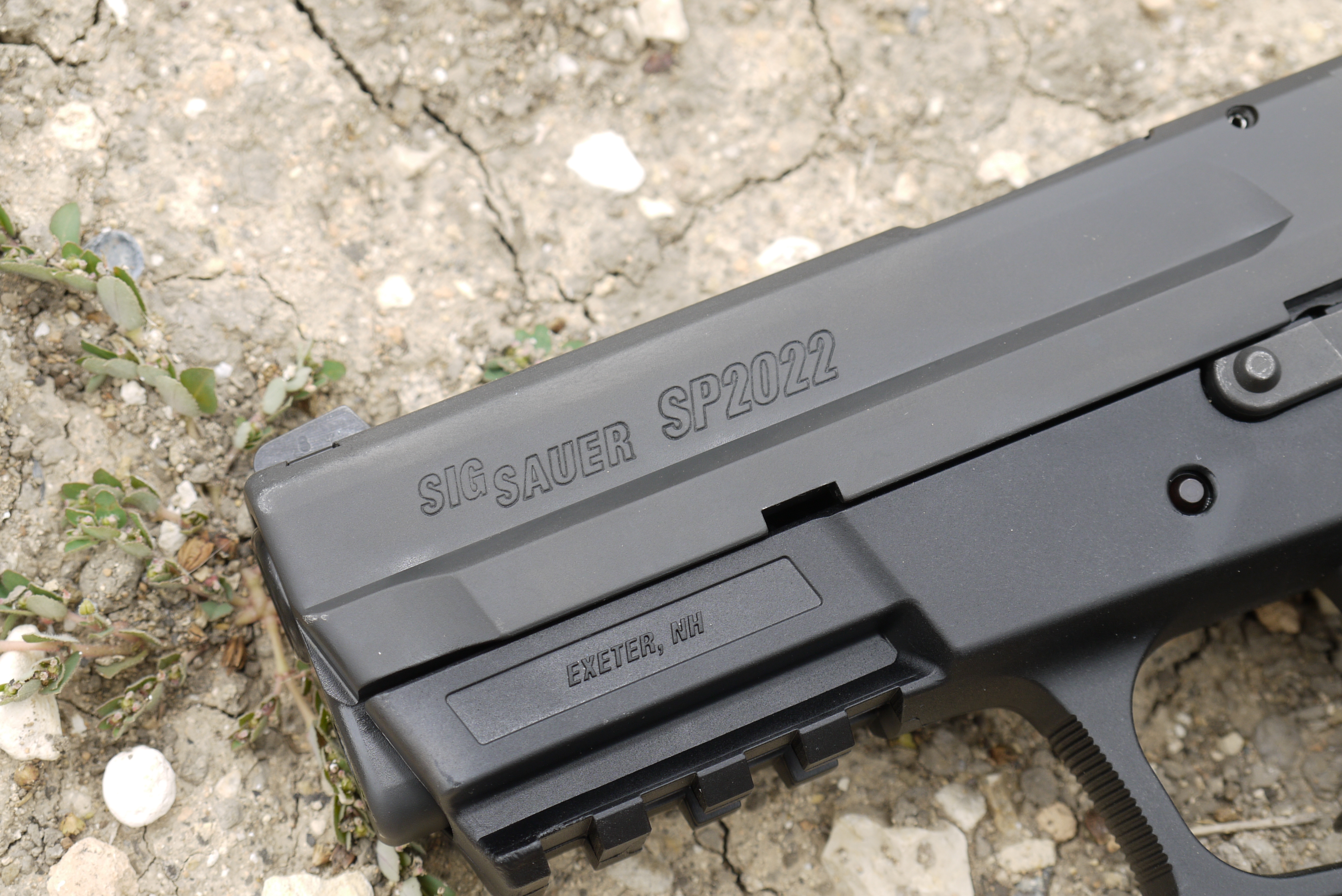 SIG designed the SP2022 (a.k.a., SIG Pro 2022) as France’s replacement for the aging PAMAS handgun (licensed copies of the Beretta 92FS). Le Sig built the SP2022 for a service lifetime of 20 years, hence the model designation. Just to keep the two’s in fashion, Les Français began replacing the older Sigs with the newer nine in 2002. Some 250k SP2022’s are now in Gallic hands. While the cheese eating you-know-whats might not plan to keep the Sig SP2022 around forever, the handgun may have found a long term home in the American market. They’re everywhere. My local gun store (San Antonio’s Academy) stocks SP2022’s aplenty. Internet-oriented buyers can mouse click a SP2022 to their local FFL via Bud’s Gun Shop and CheaperThanDirt. In fact, the sexy Sigs made the top 20 list for the best selling guns. The SP2022 may look a tad different than the P226 on the outside, but it bears a striking resemblance on the inside. The guns’ functions are identical, both in terms of trigger pull feel and the single action/double action mechanics. The grip shape is close enough for rock and roll. The SP2022’s slide’s general design and extractor echo classic Sig cues. But there are some distinct differences . . .

The first thing Sig aficianados usually notice: the grip. It’s made of plastic. While the SP2022’s polymer handle may not be as strong as steel who’s gonna break it? You? The SP2022’s significantly lighter than the P226 (a.k.a., ballistic boat anchor); suitable for everyday carry. The younger sib’s improved texture also makes it a lot more grippy.

The SP2022’s “chassis” is made of steel. The actual bits that move along the rails of the slide and keep the gun running are also metal, set into the grip. The SP2022 doesn’t have full-length rails like the P226, but again, do you need that level of build quality for non-special ops? And if you do, pay up. Meanwhile . . . The SP2022’s slide stop extends past the trigger. That’s because it uses a 1911-like system to hold everything together. The same pin that holds the slide stop in place keeps the barrel link and the slide together. It also takes down much like a 1911; the slide stop comes out when you match up the right holes. Flip the SP2022 over and you can clearly see the slide stop pin. Just like a 1911, it goes all the way through the gun (and needs to be pushed back out to strip the gun). It’s a necessity; the SP2022’s polymer frame isn’t strong enough to take the recoil of the barrel and stop it cold. The metal slide stop pin takes the brunt of the force and distributes it into the frame.

Another nifty feature: the improved decocker. It’s shorter, quicker, and feels a little better than the old version. Sig’s redesigned the magazine release in a Benelli-style triangle shape instead of ye olde Sig circle. The SP2022 comes with a standard Picatinny rail on the front for all your accessories needs. 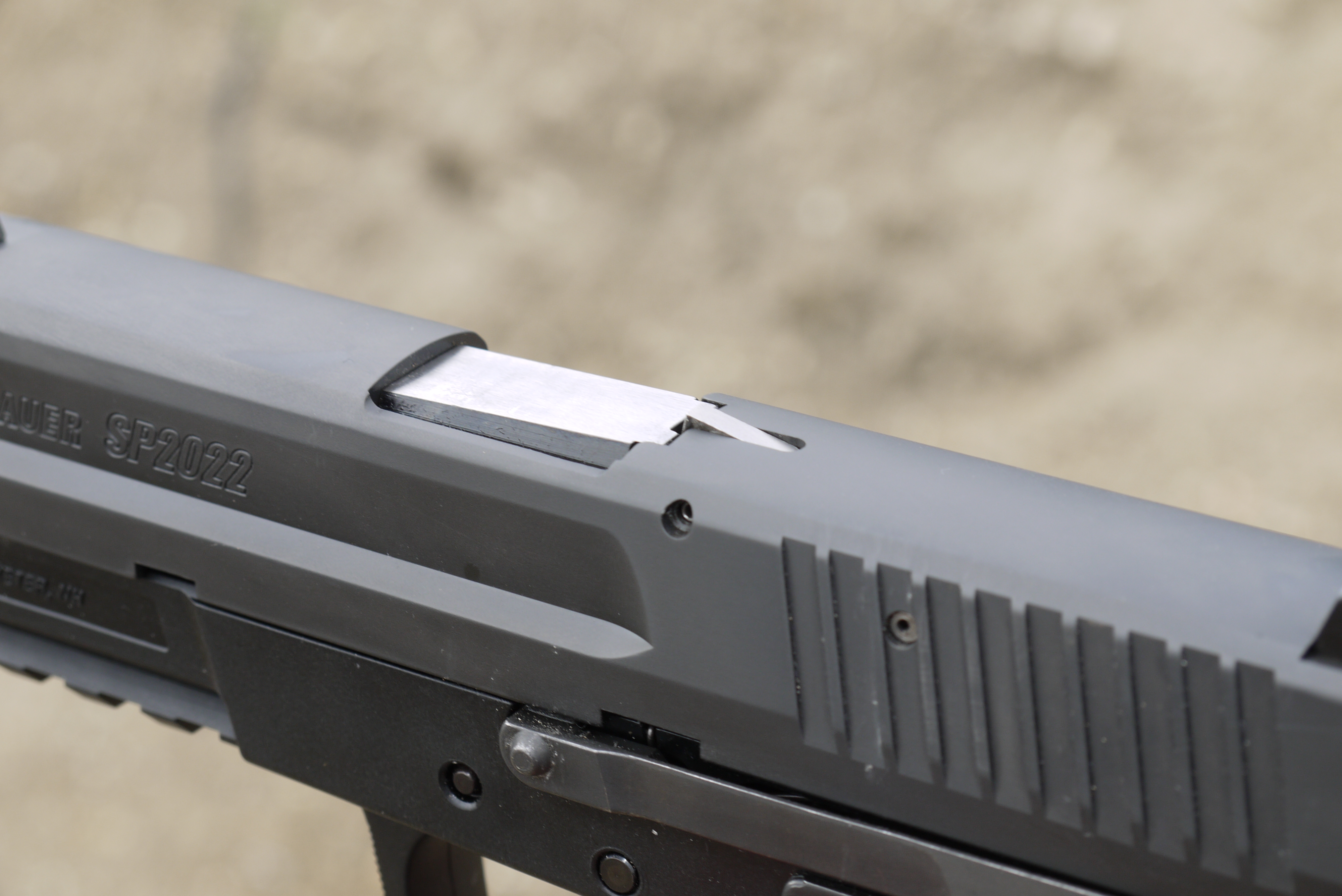 I’m not a fan of the Sig’s loaded chamber indicator (LCI). I reckon it ruins the gun’s minimalistic magic. Plus, if you’re out of ammo, the LCI advertises the fact to the Sig-savvy bad guy you’re holding at gunpoint. Nevertheless, the Sig needed an LCI to make it onto Massachusetts’ approved handgun list. So there it is. The SP2022’s trigger is almost identical to the P226′ go pedal—which means it’s not perfect. Even in single action mode, there’s more slack than a coiled rope. The break is nowhere near as crisp as the P220’s, which ain’t exactly a fresh carrot. You can make a cup of coffee (and take it to the condiment bar) in the time it takes the SP2022’s trigger to reset. Still, you can’t argue with the results. 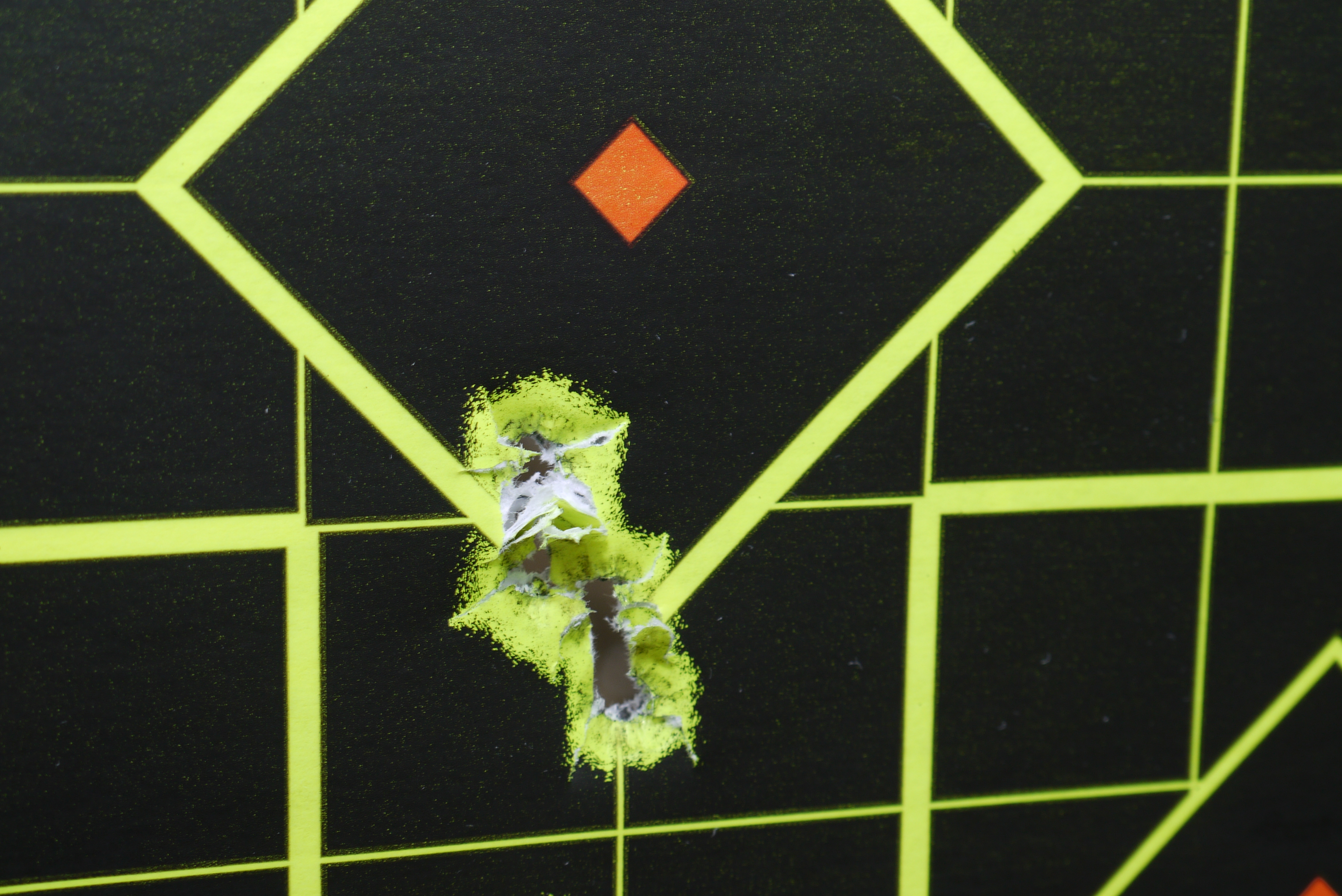 I take full responsibility for the group growing a bit to the north and south. If I’d been a better shot, you’d be looking at a 1/2 inch group at 15 yards. That’s damned impressive for a $400 gun.

All that said, the SP2022 is Sig Sauer’s red-headed stepchild. Sig’s marketing department is busy pimping 1911s and the Mk25 over their 10-year-old polymer-framed pistol. Aftermarket parts are noticeable by their absence. Grips and holsters are fairly rare. There isn’t a 22lr conversion kit for maximum plinkage. And yet, at their low price, they’re understandably selling like hotcakes.

No wonder. The “Poor Man’s P226” is a perfect poor man’s P226. It offers less weight,   looks great (for the most part) and shoots as well as any $500 gun you can name. It hasn’t replaced the Glock 17 as my go-to recommendation for first time 9mm handgun owners, but I’m thinking about it . . .

Ergonomics (Handling): * * * *
I really liked the way it feels. Its a touch top heavy thanks to the metal slide and polymer grip, but it works. And if you don’t like it there are always replacement grips available.

Reliability: * * * * *
I don’t have any data on this from personal experience, but French police tested the crap out of this thing and 400,000 rounds later it still worked perfectly.

Customization: * * * *
The only people really making aftermarket parts are Sig Sauer themselves, but they’re turning out a ton of stuff. New triggers, new grips… You want it, you got it. Holsters, on the other hand, are a little hard to come by.

Overall Rating: * * * *
For the money, this might be one of the best handguns on the market. Sig Sauer quality with a sticker price below Glock’s “perfection.” The only sticking point is the trigger, which could stand some improvement and might be a little hard for newbies (what with the DA/SA action).