SIG SAUER has been on a roll when it comes to releasing new designs and making improvements to their existing line-up. The Legion series was introduced not terribly long ago and it featured some of SIG’s finest work. Legion guns come with more than just bragging rights in that they are loaded with lots of upgrades for the price. Today we will be looking at their micro-compact Legion P938 chambered in 9mm.

I’ve been accused of being an unapologetic, snobbish Millennial when it comes to guns, and I certainly deserve the title. My generation has been bombarded with lots of cheap stuff for years thanks to our wasteful throwaway culture, which has even reached into the deepest corners of the gun industry.

I hate cheap guns and the race-to-the-bottom that has robbed us of true craftsmanship, especially in everyday guns. SIG is bringing back some of that old-world attention to detail with their Legion series.

The Legion series has garnered a great deal of attention in recent months. Many makers used to offer custom or upgraded models from the factory at an upcharge, but that practice has declined over the years as production volume has increased and unit cost dropped.

In today’s dollars, a $500 gun is cheap relative to the income of most shooters and it will usually last just about forever. That’s a good thing. But some people want that extra touch. Back in the old days when craftsmanship was the order of the day, custom upgrades were often offered as a way to display prestige in the form of engraving or fine finishes. A Colt Single Action was a substantial investment in the 1870’s, costing about $20.00.

Factoring in inflation and some other odds and ends while ignoring the wildly different purchasing power of the dollar respective to time, that puts the same gun at about $1,500-2,000 today, but that still doesn’t account for custom options, which could raise the cost to over $4,000.

The fact that SIG is able to offer an almost custom-grade pistol for only a couple hundred more than their stock version is impressive, as the Legion guns could likely be sold for more. You will find other guns on the market that are more expensive, but hardly better than the Legion P938. 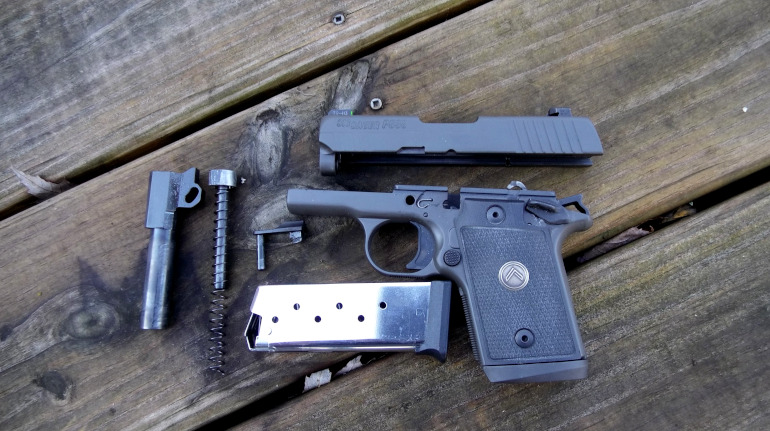 When it comes to the price and expense, realize that it’s all relative to personal preference. I know a number of gentlemen who have poured twice the value of their carry gun into new sights, barrels, triggers, and other accessories, but would have come out better just buying the Legion P938 to begin with.

The quality of the pistol is what we are looking at here, not the entry price. A $450 gun with $800 worth of tactical vomit on it is still a $450 gun at the end of the day. Earrings on a swine, in other words.

The prevailing idea surrounding many carry guns, especially compact nines, is that they must be relatively cheap and utilitarian, but this is somewhat silly. By the time you add those night sights, which usually run upwards of $100, get a couple more mags, and clean up the trigger (an important upgrade), you still won’t have as good a gun out of the box as you will the single action only Legion P938 The upgrades over a stock P938 are substantial. But the most notable of the P938 features in my book, and one that I’ve never liked about the standard SIG micro pistols, is the magazine upgrades. The pistol features a 1911-style extended beveled magwell that makes this whole thing worth it.

Gone are the bulky, fat mag attachments that you had to use to make the gun fit in the hand if you wanted to get your pinky on the small grip. Not only are reloads faster, but the gun oozes class. I could see Bond skipping his Walther for this baby in the next movie. The trigger is the other big improvement shooters will notice over the stock gun. It’s simply the best trigger I’ve tested on a micro-sized semi-auto pistol. The machined aluminum trigger breaks like a glass rod. The only one comparable I’ve tested is located in SIG’s Legion P238 (review coming soon).

The action of the pistol is remarkably smooth. SIG’s guns are typically of excellent quality, but this is a solid step above that. I’ve held brand new custom 1911 pistols from high-end shops that were put to shame by this little treasure. If you have the chance to handle one of these guns, I heartily recommend you do.

The difference is startling. Pulling the slide back on the SIG SAUER P938 Legion results in no wiggle or rattle. It’s so slick you’d think there was a gallon of grease packed in there. If we were talking bolt actions, the P938 Legion is like the Krag, where others are like Mosin Nagants. I tested the pistol for accuracy at 15 yards using some great ammo. Groups are the average of three, five-shot strings from a rest. Velocity was recorded over my Oehler 35P chronograph at a distance of five feet from the muzzle.

Overall I was very pleased with the accuracy of this pistol. For being such a small gun, it certainly handles like a bigger one. SIG did very well delivering a concealed carry pistol that shoots at well as it looks.

The velocity numbers here show that the gun is capable of launching powerful loads at great velocity, despite the short barrel length. As you’d expect, the recoil was pretty stiff on the 135gr Hornady Critical Duty and Buffalo Bore 147gr JHP +P+, but it wasn’t terrible. The most speed and accuracy came in from HSM’s loads, which were accurate well out to 25 yards and even 50 yards on plates.

SIG SAUER continues to innovate with their product lines. I am very pleased with the results I achieved with the Legion P938 and would recommend it to anyone who likes to carry something that isn’t the everyday standard. There are certainly cheaper guns (and there are more expensive guns), but this pistol hits the sweet spot in terms of looks, price, features, and class.

Accuracy * * * * *
SIG has demonstrated that they really know what they are doing when it comes to the Legion series. This gun was just dead-nuts at self-defense distances, and even further out, too.

Reliability * * * * *
I had no failures to feed or fire at all with this pistol with the exception of my large hands accidentally engaging the safety on occasion, but this was not an issue for others who handled it.

Ergonomics * * * * *
For being a sub-compact, this gun is easy to handle and shoots like a much larger gun. The extended magwell is a huge plus in reloading and the trigger is simply a joy.

Customize This * * * * *
It may seem odd, but I am giving this gun five stars even though just about every upgrade imaginable for doesn’t measure up to what SIG has already put on it. I don’t see a thing that needs changing, but if you do, there are dozens of options including threaded barrels, aftermarket grips, and much more.

Aesthetics * * * * *
SIG’s makeover crew is a bit Hollywood and a bit hardcore. This gun looks the part in every single way. I really like the Legion gray finish with the black G-10 grips decked out with the Legion medallion.

Overall * * * * *
This isn’t a gun for everyone, but for the few who own it, there’s almost nothing to compare it to. There is certainly a place for inexpensive guns and I understand why people buy them, but there is just something so suave about this pistol.