The SIG SAUER P320 XFive Legion is everything that made the P320 XFive great, only prettier.

The original 2018 verison of the P320 XFive has disappeared from SIG’s website as well as dealer offerings. It appears that SIG has refined the brand by incorporating the excellent P320 XFive version into their Legion line. The Legion series so far have been “purpose built” firearms. Although they are appointed similarly to the “standard models,” they are not all the same guns. The P229, for instance, was built as an EDC handgun. The P320 XFive Legion is built as a competition pistol for those who are interested in shooting the Production or (maybe) Carry Optics divisions.

The XFive Legion slide has the same top lightening cuts and rear and front serrations as the original XFive handgun. The only thing that sets the Legion slide apart from the previous XFive version slide is the SIG Gray finish and the legion mark on the optics plate. The slide to frame fit is even all the way round, but loose. If you shake the P320 XFive Legion in your hand it rattles almost like an old Government M1911. The most obvious difference between the regular P320 and the competition-focused XFive model is the frame. The XFive frame is made of a “TXG tungsten infused” polymer with a steel insert. If SIG’s website didn’t say that, I would have thought it was all stainless steel. That’s what it feels like.

SIG SAUER says the tungsten-infused polymer XGrip module allows for the “weight of steel and the flex of polymer.” I wasn’t aware that the flex of a polymer frame was a good thing, but as long as it flexes the same every time, it doesn’t matter.

What does matter is the additional 11.2 oz of weight the XFive frame adds to the gun. I’ve always liked the P320 platform and it’s always been a fast gun. But the XFive frame’s slightly higher grip and increased weight brings that to a whole new level.

This grip, which is also sold separately, brings the otherwise top-heavy P320 into balance. The raw weight of the gun certainly helps reduce muzzle flip, and combined with the slight weight reduction of the slide cuts, the point of balance of the pistol moves down into the shooter’s hands. 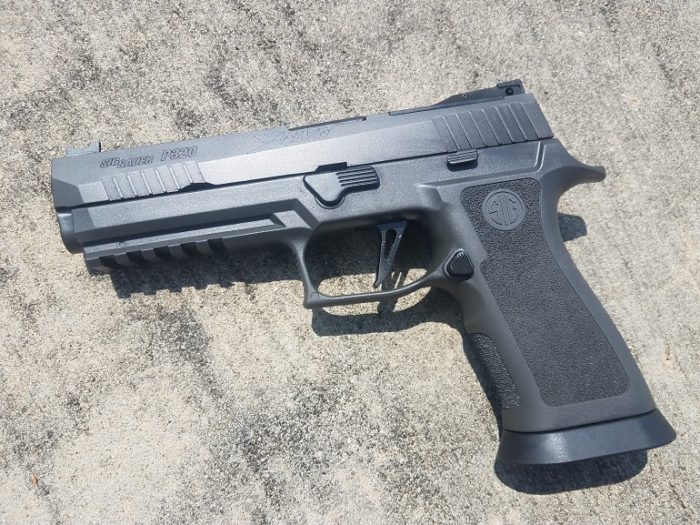 And it’s crazy fast and easy to shoot.

There have been few pistols I’ve reviewed that turn money into spent brass as fast as the P320 XFive Legion. Because of the COVID-19 crisis, The Range at Austin changed its shooting hours from 6AM-10AM. Alone in the bays, I loaded up the three supplied magazines and set the target at 7 yards to practice some Mozambique drills.

Ninety seconds later a 50-round box of ammo was empty and I had two palm-sized holes in the target’s chest and head regions. That’s not hyperbole. Including the magazine changes, it took less than two minutes to empty the gun of all three magazines in a reasonably precise manner, and I am not a particularly impressive shooter.

I had to push the target back to make my normal drills challenging. Instead of running the Mozambique at 7 yards, I ran it at 10 and 15. Instead of working standing single hand at 15, I pushed it to 25. I ran though 500 rounds that first morning in no time at all. More would come later. The P320 XFive Legion comes cut for a slide-mounted optic, and I’m sure SIG would prefer you use their Romeo line pistol optics. That’s not a bad idea, particularly for this gun.

The irons on the Legion include a fiber optic front sight and adjustable rear sights from Dawson Precision. I like just about everything Dave Dawson makes, and these are no different.

The front sight is thin, but bright, giving the shooter a fast and precise aiming point, but also provides plenty of space around the front sight to maintain visual awareness of the target itself. I did all of my testing without an optic mounted and without pet loads, so I never swapped the recoil spring. If, however, you wanted to run lighter loads and you were running the gun with a mounted optic, the 12 pound recoil spring may be more appropriate. The detachable flared and funneled magazine well makes it almost a challenge to miss a reload. If the angle of the top of the magazine is anywhere close to correct, just give it a push and the magazine will drive home and lock in place.

Note that if you want to shoot USPSA Production Division, you’ll have to remove the magazine well to be legal. The magazines’ aluminum base pad is made by the Henning Group and sports a heavily textured bottom with the stylized Legion lamda/private’s rank logo. The base of those 17-round Legion magazine ends flush with the magazine well.

I thought the fact that it doesn’t extend beyond the magazine well might cause some errors in getting it to lock fully in. But since that magazine well is so large and flared, I had no issues at all getting the magazine to lock home every time.

One of the differences between the XFive Legion model of the previous XFive is the trigger. This one has a skeletonized straight shoe with the same odd-looking XFive rake to it, aiming outward from the frame at a roughly 60% angle. It may be odd-looking, but it works great, and has a solid feel to it. The trigger pull on the Legion is advertised as “30 percent lighter.” I’m not sure which P320 trigger it’s measured against, but it breaks two ounces under 6 lbs, on average. The trigger still has some short creep to it, and some mushiness after the start. It’s a great trigger for the platform, but even at this level, the Legion’s gas pedal can’t be compared to a finely tuned 1911 or Beretta 92.

I used to be hung up on where the reset is on each pistol, but after talking with and observing some of the faster pistol shooters, I’ve stopped paying attention to the reset and completely abandoned the concept of “pinning” the trigger to the rear. Instead, I’m just trying to get my finger back forward as fast as possible and then moving rearward again. The results, especially on a lighting-fast gun like this one, have been an obvious reduction in my split times, without a loss of precision.

The three 17-round magazines that are included with the pistol meant that a full 50-round box was loaded every time. That capacity, combined with the pistol’s simple shootability, made pouring out rounds a breeze. After those first fast 500 rounds, mostly 115gr Armscor FMJs and some old Cap Arms 115 FMJs, I got into my “tub o’ loosies”. This is the plastic tub of rounds I throw together when there’s just one or two left in a box.

These included all types of rounds, frangible, FMJ, XTP, flat point and IWI’s toothy open die cut HP-ish bullet. Grains ranged from 90 to 165. I mixed these rounds into the magazines and shot them all, just over 200 of them. Then I shot another 60 rounds for accuracy.

At no point did I have any issue with the P320 Legion in any way. It never failed to fire, load, or eject. The magazine never failed to snap in place or drop. As usual, I didn’t clean the gun in any way during the review. I did lubricate the rails and the bolt face and the breach with the supplied lubricant. It ran like a champ.

At five inches, the P320 XFive Legion’s barrel length is a bit longer than the stock P320 with a correspondingly longer slide length. That’s a bit more barrel, and a bit longer sight radius, but not much. The precision of the Legion falls right in line with previous models.

The best-shooting round was the IMI 115gr Die Cut bullet, printing 1.9” groups at 25 yards. I’ve shot that round through quite a few guns, and it’s regularly one of the better shooters.

But right on its heels were a host of rounds, including the dirt cheap Armscor 115gr FMJ, the Speer 124gr Gold Dot +P and the Wilson Combat Match 147gr HP. Every one of those rounds were between the 2 and 2.3” mark. All groups were the average of five rounds shot for four-shot strings off a bag at 25 yards. That’s a good, but not exceptional level of precision. My only disappointment with the XFive Legion, and a real chance to set the Legion model apart from the standard XFive, is that the barrel remains un-threaded. That’s a bummer. The P320 XFive Legion is a fast, cool gun, but nothing’s cooler than quiet.

Other than that, I’m glad SIG chose not to mess with a good thing, and left the P320 XFive pretty much the same as the previous P320 XFive when the created the Legion version. Style and Appearance * * * * *
I dig the SIG Gray, and the well-placed Legion branding accents are tasteful and well placed.

Customization * * * * *
This is where the entire P320 line shines. Since it’s a serialized chassis gun, you can change everything about it. Slide, frame, sights trigger, barrel, anything you want. The whole point of the Legion version is that THIS is the one you want.

Accuracy * * * *
Very good, with a wide variety of rounds, but none scored exceptionally well.

Overall * * * * 1/2
The Legion version of the P320 XFrame makes a good gun even better. I can’t give a full-sized gun that doesn’t break the sub 1″ mark a full five stars, but that’s about all I really have to complain about. If I want a threaded barrel, there are aftermarket options available. The P320 XFive is a good looking, accurate, incredibly easy-to-shoot pistol. I’ve always liked the P320 in general, and really dig the XFive, but this Legion version is the first one that’s hard to give back.