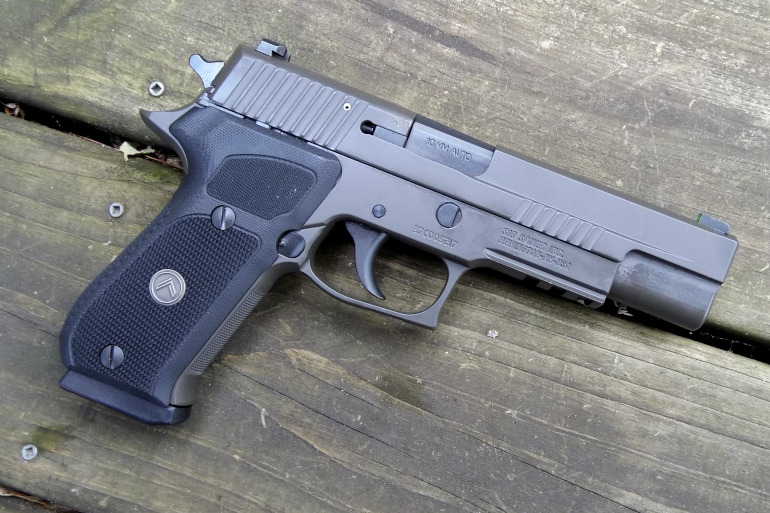 I have never really been that big of a fan of 10mm. I have owned several pistols chambered for it over the years and have always been fast to sell them. That’s not from a fear of recoil, as some of you may be thinking. I own handguns that are substantially more powerful, and my favorite .44 Magnum is the Smith & Wesson Alaska Backpacker IV, which is a super-light revolver. I enjoy firing that gun quite a bit and it’s always a thrill.

So, is it the 10mm’s capacity then? No, not really. When it comes right down to it, I just don’t see that much of a point to it.

The steady, but limited, popularity of the 10mm today comes from two places. The first is the perception that it’s substantially more powerful than other handgun calibers and the second is that it’s suitable for hunting any size game. I see it praised for all fo that, but it’s really just a decent round with limited popularity.

Like many cartridges, the 10mm was introduced to supplant something that was already established. But despite the 10mm initial popularity when it was introduced, the .45 ACP hasn’t gone anywhere. The minor resurgence of the 10mm today is largely based on the fact that many people don’t know how to shoot revolvers and opt for a platform they’re more familiar with.

I don’t dislike the 10mm as a cartridge. I simply don’t see a need for it when there are other options out there that do what it does better. An example of this is the .460 Rowland, an elongated .45 ACP. Many common guns like the GLOCK 21 can be adapted to use it with just a barrel and spring change. The 460 Rowland is wildly powerful, approaching even .44 Magnum levels. The SIG P220 Full-Size is a large, heavily pistol. It needs to be to handle the 10mm cartridge. (Josh Wayner for TTAG)

So why all this discussion about the 10mm cartridge? Well, it pretty much goes hand-in-hand with doing a review on a 10mm gun. Many people think that the 10mm is kind of the 6.5 Creedmoor for handguns. It is assuredly not. There are many loads in .45 ACP that will do just fine for most uses outdoors. Buffalo Bore makes a 255 grain hard cast +P load that is my go-to for outdoor use. The existence of that single offering is why I don’t own a 10mm.

The SIG SAUER P220 Legion in an excellent semi-automatic pistol. My only real problem with it is the fact that it’s chambered in 10mm. Like all of the Legion series pistols, it’s an attractive and well-built gun.

This P220 is akin to most other SIGs in that it is a hammer-fired DA/SA semi automatic pistol and feeds from eight-round single stack magazines. While the P220 Legion isn’t radically different from its stock cousins, it’s a semi-custom gun with fit and finish that are impeccable. The slide and action are all extremely smooth and the P-SAIT trigger with its short-reset is one of the best you’ll find in a semi-auto handgun

The P220 Legion comes with a pair of bright X-RAY3 day/night sights. The the custom g10 grip scales are exceedingly comfortable.

The big boy P220 Legion Full-Size is a large, heavy pistol. It feels as heavy as a full-size revolver in the hand. This is one solid gun. It’s large and heavy enough that it would be a difficult pistol to carry it concealed. This is definitely one that you’ll want to carry in some sort of chest rig or shoulder holster if you’ll be taking it out in the wild. The 10mm Legion P220 has a 5-inch barrel compared to the .45 model’s 4.4″ barrel and has a proprietary SIG rail for accessories. The SIG X-Ray day/night sights are good in any light conditions. (Josh Wayner for TTAG)

Given its size and hefty 40 oz. weight means shooting the gun isn’t a terrible experience. The weight and extra barrel length (5 inches in 10mm vs. 4.4 inches on the .45 model) and sight radius mean it is very easy to control, particularly in single action. The double-action trigger pull is quite heavy, and you had better train if you plan on taking a shot with it at any distance beyond about five feet.

As far as handling goes, the magazine springs are quite stiff as compared to others I’ve seen, and this extends to the action spring as well. Even with slide serrations fore and aft, the P220 10mm is downright difficult to rack. While I can certainly accomplish it, operation with sweaty or gloved hands could prove difficult. Shooters with weaker grip strength will have a hard time. This, of course, is due to the fact that the 10mm is a high energy cartridge, so the heavier springs actually serve to reduce recoil and muzzle flip. The accuracy was quite good as you’d expect with that long sight radius. The SIG SAUER P220 Legion Full-Size produced groups as small as 2.25″ with SIG’s 180gr Elite V-Crown JHP.  The gun shot well off the bench. Recoil wasn’t brutal, but you could definitely tell that you weren’t shooting .45 ACP. My overall impression of this gun is quite positive. I really enjoyed my time with it. The gun performed exceptionally well and I was able to ring steel with it at 50 yards quite consistently with just a 6 o’clock hold.

If you are in the market for a 10 mm pistol, the P220 Legion Full-Size should be at the top of your list.

Accuracy: * * * * *
The accuracy here was great. The big P220 Legion was easy to keep on target due to its bulk. Single action was the way to go. The DA pull, while smooth, was also stiff.

Reliability: * * * * *
There were no failures to feed or fire while testing this gun.

Ergonomics: * * * *
This is a very large, heavy pistol, but it’s comfortable in the hand with its G10 grips and extended beavertail. The slide and spring were very stiff. Shooters with weaker hands may have trouble operating the 10mm version of the P220 Legion.

Customize This: * * * *
This is a semi-custom gun, so already has much of what you’d want. You can of course add accessories if you wish (note that the rail is the proprietary SIG rail), but I wouldn’t. The gun is heavy enough as it is.

Aesthetics: * * * * *
SIG always seems to do a good job with looks these days, but the Legion gray slide and frame finish with G10 grips are particularly attractive. This one is no different.

Overall * * * *
This is a great, powerful gun, but it is a bit much in terms of recoil and weight when the stiff springs are considered. I know that this is needed to deal with 10mm ammunition, but it is something of a negative as it makes operation difficult.