There’s a debate raging in the AR15 community. The point of contention: operating systems. Traditionalists favor direct impingement. Designed by Eugene Stoner, DI harnesses the power of the gasses trapped in the barrel to cycle the rifle’s action. It’s a remarkably simple system with one critical flaw: the gasses blow directly into the rifle’s upper receiver and bolt carrier. Over time, this leads to a dirty rifle. In a gas piston system the propellant gases push a solid rod that pushes the carrier to the rear. That makes for a cleaner running gun. While the controversy continues, SIG SAUER has covered its bets with their piston-driven 516 and, now, the 716 . . . The SIG SAUER 516 (top) is chambered in the most popular AR flavor: .223. The 716 (below) steps-up to the plate firing the bigger, badder, more lethal .308 Winchester cartridge. Although the two rifles share many similarities, the 716 isn’t simply a scaled-up version of the 516. Obviously, the 716’s gas parts and push rod are heavier; beefed-up for use with the heavier .308 cartridge. While the 516 uses Magpul MOE furniture, the 716 ships with the Magpul MIAD pistol grip and ACS buttstock. Both rifles ship with a Magpul magazine in their respective calibers and both rifles ship with a nylon sling and folding backup-type iron sights. The SIG 716 features a hammer forged barrel with a one-in-ten twist. This relatively fast twist rate works well with most everything available in factory .308, including heavyweight match bullets. To add corrosion resistance and durability, SIG’s chrome-lined the 716’s chamber and bore. The rifle barrel’s threaded in the 5/8-24 pattern; it will accept most aftermarket flash hiders and muzzle brakes.

A free-floating railed handguard—running from the 716’s front sight/gas block to the upper receiver—surrounds the barrel. The handguard is firmly bolted in place. At the same time, it’s easily removable for inspection and cleaning of the barrel’s exterior surfaces.The handguard’s top rail sits flush with the flat upper receiver, creating miles of uninterrupted mounting surface.

The SIG 716 has four gas settings: an off position, a suppressed position, a normal operating position and an overgassed setting. The latter is handy for underpowered ammo or heavily fouling. You can access the gas system’s parts through the front of the gas block. Unlike some competing piston designs, you don’t have to remove the 716’s rail to clean the gas parts. The 716’s lower receiver is milled from aluminum with QD sling swivel sockets machined into the left and right sides. The mag release is ambidextrous, but the selector is on the right side only. The buffer tube is behind the carbine length, MILSPEC diameter lower.

The tube’s castle nut is properly staked; it won’t come loose. The rifle’s controls operate smoothly. The selector clicks from SAFE to FIRE as crisply as a well-laundered shirt, with extra starch. While the trigger’s a little on the heavy side (7.6 lbs.), the standard military-type go-pedal breaks cleanly with little over-travel or creep.

The 716’s bolt and carrier are massive chunks of machined steel with the carrier tapering down to standard .223 diameter behind the firing pin retaining pin. This reduced diameter “floats” the carrier in the buffer tube—obviating the need for anti-tilt recoil buffers (to keep the carrier from hitting the bottom of the buffer tube due to carrier tilt).

The .308 Win is an efficient cartridge rightly credited with outstanding accuracy regardless of bullet weight. I fired a number of five-shot groups from 100 yards that hovered in the 1.5″ range. While these groups aren’t acceptable for precision match rifle competiton, they’re more than close enough for a defensive rifle. In the 716’s defense, I didn’t try a huge selection of match ammo. The rifle might shoot more accurately with some experimentation and a load it really likes. In addition to match ammo from Federal and Remington, I also shot several hundred rounds of steel cased Russian ammo from WOLF and Brown Bear. Steel cased ammo can be problematic in some guns. The SAUER 716 Patrol Rifle gobbled it up with no issues.

I tried the rifle using steel magazines from C Products. The mags fed like pigs at a trough but they didn’t lock into the rifle easily when loaded to their twenty round capacity. Of the four steel magazines tested, one would only accept nineteen rounds. 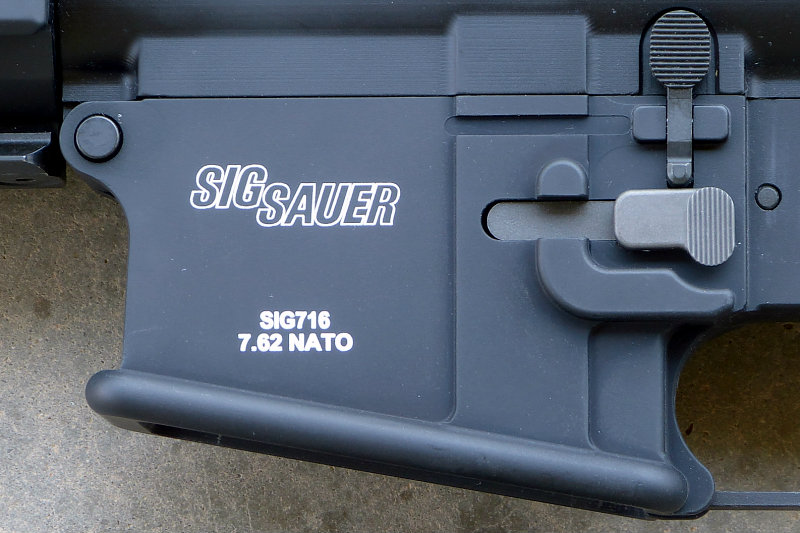 The SIG SAUER 716 will likely make its way into the three-gun competition syndicate as a “Heavy Metal” rifle. This additional power comes with trade-offs. Magazine capacity is generally limited to twenty rounds, and there are only a few companies making compatible mags. At $20 – $25, .308 they’re generally more expensive than their .223 counterparts. The rifle is also something of a beast. The big SIG tips the scales at nearly 9.5 pounds; two pounds heavier than the SIG 516. While most .308 modern sporting rifles are around nine pounds SIG could have put the 716 on a diet. A thinner, re-profiled barrel and different furniture would have shaved off a fair amount of weight. In short, the SIG 716 is a great gun firing a round that’s ideal for hunting or one-stop stopping. But why bother? Why not buy a cheaper DI .308 AR?

Fooled ya. I’m not going to get caught up in the reliability debate. Let’s just say this: SIG’s piston drive doesn’t make the 716 any less reliable. Yes, it adds a few additional moving parts. But those beefy bits aren’t easily damaged. Any abuse severe enough to render the piston parts inoperable would probably break other more vital parts of the gun, too. And smash a Stoner gas tube, too.

Speaking of broken bits, spare parts for the various piston designs aren’t interchangeable between the various makers. Luckily, major wear parts like extractors aren’t unique to the 716; they can be purchased from any decent parts supplier.

At a not inconsiderable $2,132 (seen on the street for $1700), the SIG SAUER 716 sits below the price range of comparable rifles from ArmaLite, Springfield Armory and DS Arms. If you don’t buy into the Internet piston hate, the SIG 716 is a lot of rifle for the money. You get a clean-running operating system and the ability to reach out and stop someone. What’s not to like?

Accuracy: * * *
1.5 MoA is pretty good, but there are guns that’ll do better. Not necessarily better for less, but still.

Reliability: * * * * *
Thanks to the pushrod piston system, the 716 gun stays clean and lubed longer after more rounds downrange than the competition.

Handling: * * * *
The controls are good but the gun needs a longer fore-end.