Some things can’t really be improved upon. Take, for instance, Jeremy’s review of the full-size Ruger Security-9 9mm pistol we published last January. He pretty much nailed it. Ruger’s now making a compact size model and from re-reading his take, I can confidently echo virtually everything he had to say about the bigger handgun. Well, almost. Because while the Security-9 Compact is basically a bobbed version of its semi-automatic bigger brother, that brings some changes into play in both its use case and how it compares to its smaller competition. First, the features. The Security-9 Compact is, in fact, a shortened version of the full-size gun. No surprise there. It’s clearly intended as a medium-capacity compact carry pistol.

Compared to the full-size Security-9, the Compact is about an inch less in length, .6-inch less in height, and has barrel that’s .6-inch shorter. As you’d expect, it weighs a couple of ounces less, too. But like the original, it’s still a shrouded hammer-fired, single-action (basically, a scaled-up version of the proven LCP II) sidearm with a Browning tilt-barrel design. Many 9mms in this class are striker fired.

The reduction in height and length mean it’s much more concealable than its bigger brother. It also makes this a two-finger pistol (above) when using one of the two flush-fit 10-round magazine that Ruger includes with the pistol. If you want a full three-finger grip, that’s not a problem. Ruger also throws in an extension you can install on one of the stainless-steel magazines. Installation is simple, too. All you need is a punch and you won’t have to worry about launching your spring and follower across the room, either, thanks to the magazine’s internal floor plate. Jeremy thought the Security-9 could have done with a more aggressive texture for a sure-er grip. That wasn’t my experience. Even when my hand got sweaty, I didn’t have any trouble maintaining a good hold on the handle. However, the Ruger lacks a selection of back straps for tuning grip fit. The angled cocking serrations are sharp enough to get a good grip on the relatively easy slide racking alloy steel slide, too. And I don’t expect it to chafe if carried under a shirt against bare skin.

While the magazine release is perfectly positioned, I could have done with a slightly bigger (taller) button. Then again, my hands are unusually small. The average shooter will have no problem dropping a mag without adjusting their grip. The American-made Security-9 is equipped with the same thumb safety as the original. It’s definitely on the small side. That’s good because it keeps the compact pistol’s overall width down and won’t snag on anything during the draw. It’s big enough, however, that swiping it off with your thumb is quick and easy.

Engaging it, however, is neither. Unlike, say, a 1911 safety, the Security-9’s lever is hinged at the front for some reason. That means you can’t easily engage it one-handed or without re-gripping the gun. I don’t find that to be a big problem — disengaging it is always the much more urgent task — but some users may.

If you object to a safety-equipped carry gun, as Jeremy pointed out, you could always remove the safety lever. But removing a safety feature is never a good idea liability-wise if you ever find yourself using the pistol in a self-defense or home-defense situation. Better to leave it be. It takes enough effort to engage the Security-9’s safety lever that you won’t be flipping it up accidentally. The 3.4-inch barrel is long enough for a short length of Picatinny rail to attach a light or laser. The Security-9’s front end is nicely sculpted to let it easily glide into a holster. It’s far less chunky-looking than some of its 9mm handgun competitors. Takedown is easy enough, but could be easier. Just align the slide with the top of the takedown pin and…use something (a small screwdriver works well) to pop the pin out a fraction of an inch. From there you can slide it with your fingers. The good news: The hammer-fired Security-9 doesn’t require a trigger pull to disassemble. The bad news: It’s really hard to take it down without some kind of tool. You can’t pop the pin out from the other side. That’s less than ideal. The GLOCK-like sights, with that rear sight U design, work well enough with a good amount of room around the front sight post to see your target. The low-slung rear sight is angled in the front, which means you won’t be able to use it to rack the slide one-handed if necessary. Unlike GLOCK sights, the rear sight is easily drift adjustable. It’s dovetailed and all it takes to adjust it is an Allen wrench. No sight pusher required.

Don’t like ’em? Not a problem. Since the full-size version has been out there for over a year, there are plenty of aftermarket options (such as three-dot sights, fiber optics or night sights), and it’s easy to swap them out yourself. 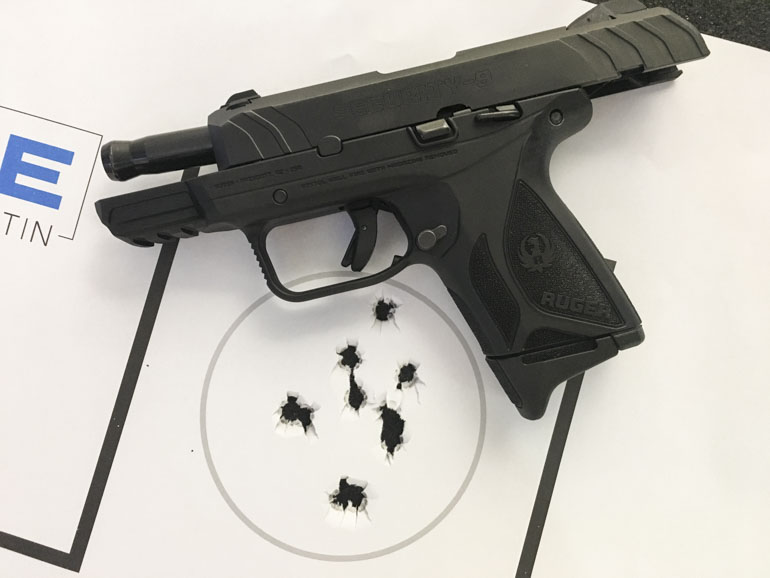 We ran the gun with more than 500 rounds using a variety of gun food. That included range ammo from Armscor and Winchester as well as JHP rounds such as Federal HST and Hydra-Shok, Remington Golden Saber and Hornady Critical duty. The Security-9 will, after all, be carried frequently and used in an everyday carry personal defense role.

That group of 10 was shot at seven yards in the normal two-handed manner with Hydra-Shock. That’s five shots of Federal Premium HST at seven yards, braced and aimed at the question mark. That group is a hair under one inch. The best groups we got at 25 yards were just over three inches. Not bad at all from a concealed carry pistol.

The verdict: The Security-9 is plenty accurate for self-defense work as is. It would be even more accurate with a better trigger. That’s not to say the factory bangswitch is bad, but no one will every accuse it of being crisp. It’s fairly mushy and while there’s a tactile, positive reset, it’s almost out to the fully-released position.

But you can’t look at the Security-9 without taking into account its price point. This is an extremely affordable gun that compares favorably to some very popular competitors that cost many more samolians. To wit: 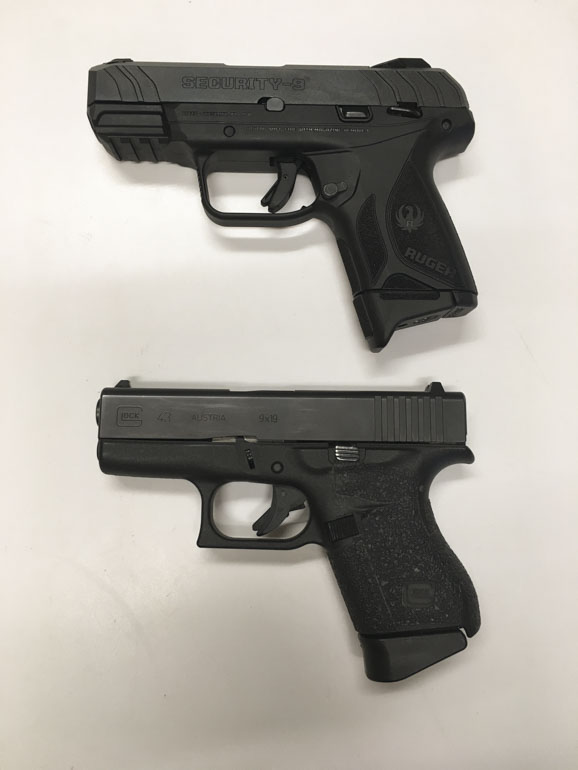 Size-wise, the Security-9 is virtually the same as my GLOCK G43. While the published specs say the Security-9 is a mere .04″ wider than the G43, that’s slide width. In reality, the single-stack G43 carries thinner than the double-stack Security-9. 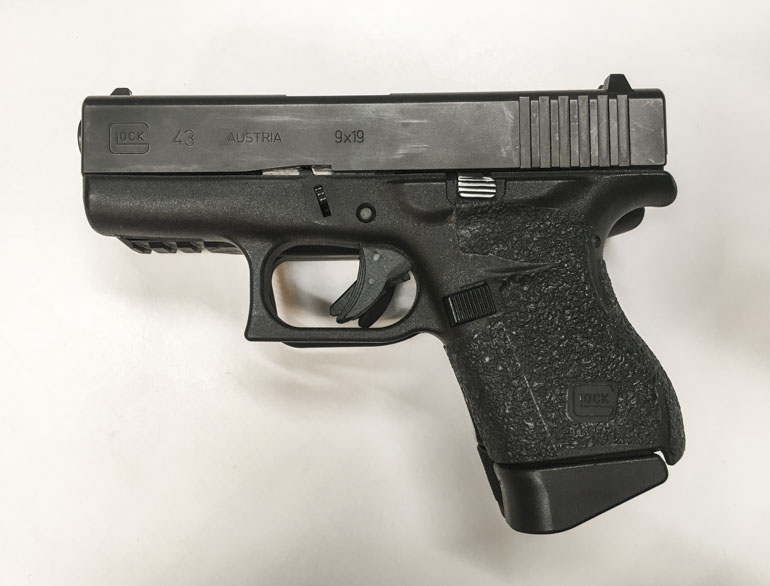 Then again, the Security-9 gives you four more rounds to carry. That size/capacity trade-off is one lots of gun buyers are willing to make.

With its 10+1 round capacity, the Security-9 will also inevitably be compared to the SIG SAUER P365, too. Here’s a handy-dandy table showing the three guns’ relevant specs (all prices from Brownells for comparison):

Is it the best compact 9mm? The Security-9 isn’t a perfect gun. What gun is? Its trigger isn’t as good as the GLOCK’s or the SIG’s. You need a tool to take it down. And some shooters won’t like the manual safety.

Then again, it gives you more rounds than the G43 and costs $170 less than the SIG (to be fair, the P365 comes with standard night sights). For a lot of buyers, that performance and savings will be more than enough to justify those compromises.

It’s another polymer frame 9mm pistol. None of them will stop traffic. But it isn’t overtly ugly.

Surprisingly good, especially for someone with small hands (like yours truly). I’d like a little larger mag release, but you probably won’t have any problem at all. And I’m not sure why the safety is hinged at the front.

Perfect. It ran everything from cheap range stuff to first-run defensive loads without a complaint.

Plenty of choices out there already, thanks to the full-size version being on the market for more than a year. A quick search showed plenty of holster options out there already from Crossbreed, DeSantis, Alien Gear and more. With its internal aluminum chassis (that’s the legal “gun”) look for various colored grip frames, too.

The trigger’s OK and the safety’s strange. I’d also rather not have to use a tool to take it down. But those are minor gripes in a compact 9mm pistol that’s 1) perfectly reliable, 2) packs 10+1 in a compact form, 3) plenty accurate, and 4) does it all for at least $125 less than fancier competitors. The Security-9 is a lot of concealed carry gun for your hard-earned dollar.

Looking for the best concealed carry 9mm handgun? Check out other TTAG coverage of similar pistols: