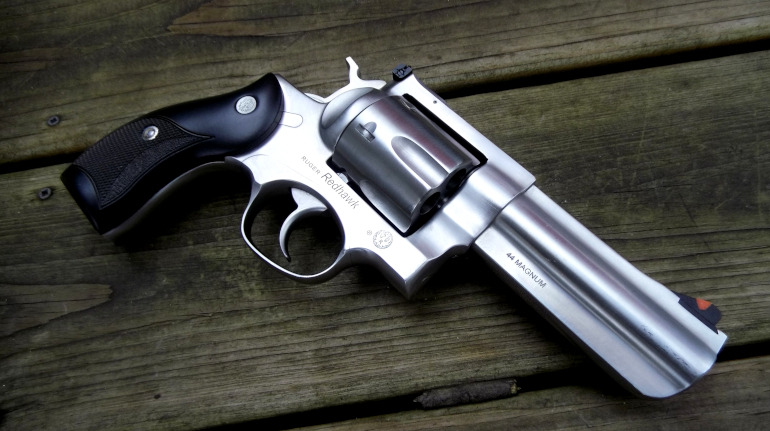 The words ‘lightweight’ and ‘low recoil’ are not things that are typically associated with the .44 Magnum. If you think that this article is going to be a rejection of that concept, well, you’re wrong. Today we’re going to be taking a look at an absolute unit of a gun: the Ruger Redhawk chambered in, you guessed it, .44 Magnum.

Here at The Truth About Guns we like to give you a realistic idea of guns, ammo, and the culture around them. I try to be as objective as possible when looking at things, but I occasionally have some personal thoughts or opinions that into the mix.

As an example, to the surprise of some, I am both a hunter and a believer in animal rights. I kill my own meat fair-chase, but I completely abhor factory farming practices to the point I hardly go to restaurants anymore. I’m not afraid to talk about that or the fact that I don’t think the 6.5 Creedmoor is anything special. My articles reflect these things and this one is no different. What does that have to do with this gun? Well, there are writers who go into a review like this expecting something bad or relatively painful and they always come out sounding like they don’t know what they’re doing. Rarely are they objective or spell out what the reality of a given gun is.

They are sometimes surprised by how mild the recoil is or how soft-shooting the big gun is. They lure you in with glossy photos and images of cast lead that make you ponder yesteryear. This review is going to be an unvarnished look at what the upper end of the .44 Magnum looks like and I’m going to tell you now that it’s not for everyone, not even me, and I love the .44 Mag. Make no mistake, I’m not criticizing the Ruger Redhawk or any of the ammo I used in this review. They all did exactly as advertised and did it with great gusto. This large frame revolver is one of the thickest, heaviest, and most robust guns a shooter can own.

The entire thing, less the grips, is made of rugged stainless steel and it is pretty much indestructible. In the event you run out of rounds, you can always beat an attacking grizzly to death with it.

This is a fairly compact revolver given its chambering and the amount of steel used to make it, however it still weighs a ton — 47 ounces — and really can’t be carried on the belt unless you plan on some lower back pain being a factor in your life. This is a revolver that’s best carried in a chest rig. Probably as a result of it being so large and heavy, the Redhawk is quite accurate with mild .44 Magnum and .44 Special loads. Firing .44 Specials of any flavor is about as easy as shooting a .22LR.

The Ruger Redhawk’s trigger is remarkably good. Double-action pull weight is relatively light at just under eight pounds and free of grit or hesitation.

If you’ve only fired .44 Magnums, good old .44 Specials will feel like a stiff sneeze. To give you a good idea of the range of power and accuracy this gun has, I put my wrists and hands through the wringer and tested a healthy variety of commercially available options. To get an idea of what it’s like to touch off a Buffalo Bore 340gr +P Hardcast in this gun, just go slam your hand in a car door and repeat it for every shot in the six-round cylinder. There is a limit that man can take with his bare hands, and, despite the great things we have accomplished in terms of guns and ammunition development, I fail to see who exactly would benefit from this combination. The recoil shooting upper end of .44 Magnum loads is utterly savage. That brings me to the point of end use. This gun, while very attractive, is handicapped by its (mostly) smooth, micarta grips. The revolver easily slides in the hand under recoil and is difficult to fire one-handed. I tried some close-range drills with it while wearing my hiking gear using some of the higher-power ammo and found that it was nearly impossible to get off more than one shot on target when point-shooting rapidly. While micarta is certainly attractive, this gun cries out for a set of recoil-absorbing Hogue rubber grips.

The high recoil makes for a substantial handicap in an animal attack scenario. Yes, there is a likelihood that a charging grizzly could be put down with a single shot, but that’s not something I’d want to count on.

If you decide to get a gun this large and heavy and load it with lower-powered ammo, you’re defeating the purpose. If firing .44 Special, you’re looking at performance similar to the .45 ACP, which is great except that you’re now selling yourself short with just six rounds in a heavier gun. The reality of self-defense shooting .44 Magnums is that you may only get off a single shot because of high recoil and a double-action trigger pull. Ruger makes fantastic guns. I’m a particular fan of their double-action wheel guns. That can’t be denied. I have had the pleasure of reviewing many of their products and they have proved to be robust, rugged, and reliable. I think that this gun is great, too.

It does exactly what it’s supposed to do. The only real question is about the relevance of the .44 Magnum in a modern context. There are a number of rounds available today that offer lower recoil and similar terminal performance, but with much greater on-board ammunition capacity.

Accuracy * * * *
This is a solidly built tank of a gun that delivers field-grade accuracy at handgun distances. The relatively short sight radius given the 4.2 inch barrel and significant weight make it both steady to aim and tiresome to hold for long periods of time. Firing one-handed is a challenge.

Reliability * * * * *
I had no issues with the gun, but some types of ammunition had somewhat sticky extraction. I don’t see this as a huge issue considering that you probably won’t have time to reload while under attack from a bear anyway, but it is worthy of note.

Ergonomics * * *
This is a large gun that’s a challenge to carry. There are aftermarket rubberized grips available that will help soak up some of the recoil, and I think that this gun needs exactly that. I didn’t change the grips during the review and found that it was a bit hard to hold onto under recoil. This gun, when shooting upper-end to insane-end ammo isn’t comfortable at all.

Customize This * * *
There are options available out there in the form of grips and sights, but not much else. Not that you need much more than that. Holsters and chest rigs are available from a number of makers, which is a plus.

Aesthetics * * * * *
This is very attractive gun. I appreciate the fact that Ruger went with micarta on the grips, which is a bold move on an outdoor gun today. The lines are classic, the brushed stainless is just matte enough to avoid glare, and there are no obnoxious features that don’t belong.

Overall * * * *
This is not a gun for everyone. The weight allows some of the most powerful ammo ever made for the caliber to be fired from it. Lower powered rounds aren’t a waste of time, but a questionable choice given that there are lighter guns out there that do just fine with mid-range .44 Mag. If you buy this planning on shooting only .44 Special, I think you may just want to skip to the end and just get a semi-auto 1911 or something. The right person will do great with this .44 Magnum revolver, but that person likely lives in a place where this type of tool is more of a necessity than a novelty.