Today, we shooters enjoy more options than ever before. The industry as a whole is quick to meet demand and maybe no company is faster at gauging shooter enthusiasm and meeting the demand than Ruger. The company continues to release gun after gun that shooters not only want, but have been actively hoping for. Today we are taking a look at a little gun that is huge on features and fun, which is always in demand.

The 22/45 Lite series isn’t especially new. It has been out for a while, but it represents a unique line that are prefect for just about any shooter. The gun that I’m reviewing here is model number 43918, which is finished in what Ruger calls Diamond Grey. Ruger offers the 22/45 in a variety of colors and to my eye, the Diamond Grey looks so neat in person and the photos hardly do it justice.

The 22/45 Lite line is available in more than just Diamond Grey. It also comes in magenta, OD green, red, and yes, even black. Ruger makes one in a finish you’ll like.

Each model features interesting ventilation cutouts in the aluminum receiver that not only look good, but also serve to further lighten the pistol. The unloaded weight of the pistol is a light, but not too light 25oz. I like that it has both good balance and doesn’t feel like a boat anchor in the hand. The gun’s rubber 1911-style grips look like traditional double diamond grips, giving a good purchase on the gun, which is a plus when trying to steady a pistol this light.

The gun has a great many good and well-thought out features. Among the first is a threaded muzzle, a feature that’s becoming something of a must-have on modern pistols due to the increased popularity of suppressors and the wide variety of muzzle devices available today. The threads are cut ½-28” for easy accessory mounting. 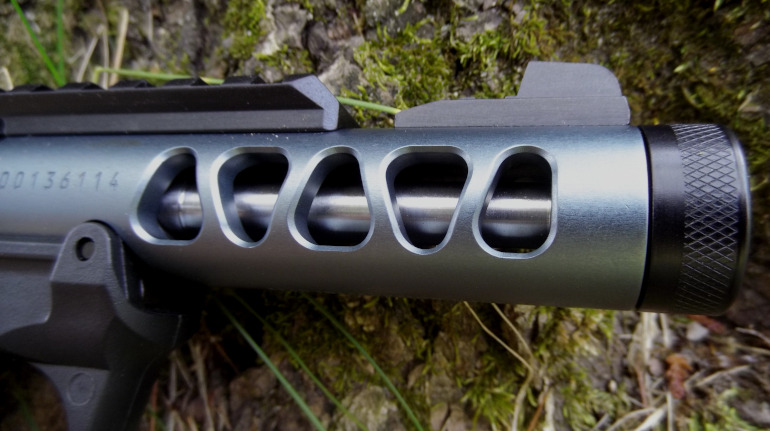 This model features multiple options for sighting. In addition to the adjustable iron sights (rear adjustable), the pistol has a length of rail mounted to the receiver. This makes it a snap to add red dots or other types of reflex sights. The rail is also removable should you decide to stick with irons.

The gun has a number of other features that make it very easy to use. The magazine and bolt releases are both large easy to reach. The safety is ambidextrous and clearly marked. As an added safety feature, the gun won’t fire with the magazine removed. Some people like that feature and some hate it. I’m pretty indifferent on this point and don’t see it as a hindrance. One of the most prominent features of Ruger’s Mark IV .22LR line of pistols is one-button takedown. Unlike earlier generations of Ruger’s popular Mark guns which required an engineering degree to disassemble, the Mark IVs models are a snap.

To disassemble the pistol, simply ensure it’s clear and the safety is engaged, then push the button on the rear of the gun. This allows the receiver to tilt up and off the frame and the bolt assembly to drop free.

Reassembly is just as easy. All you have to do in insert said bolt assembly, hook the grip onto the receiver, and push down. No tools are required to do the job. Even new shooters I took out to shot the gun commented on how easy it was to take apart and put back together. Shooting the gun revealed that it got along with just about everything I put through it. I shot over 1,000 rounds during the course of my testing and it only had issues with a friend’s 15-year-old mixed bag of leftovers. Even then, it only caused a jam twice out of about 100 rounds of mixed ammo. It had no issues with modern production .22LR from Federal, Remington, Winchester, and several others.

Best of all, accuracy was stellar at all ranges I shot. From the bench at 25 yards it routinely put ten shots into 2” with Federal 36gr Champion Target. Remington 40gr RN loads produced about 3” at 25 yards. Overall I noticed that the Federal loads were generally the most accurate from this gun.

The Mark IV 22/45 has pretty much everything you need and could want and nothing you don’t. It ships with two 10-round magazines, but extras — you will want more — are readily available everywhere. In fact, I highly recommend buying lots as they tend to get emptied with some regularity. In addition to being a blast to use at the range, the gun is also useful for small game hunting, pest control, and it would make a great choice for backpacking, especially with a small red sitting on the rail.

The Mark IV 22/45 is a fantastic gun and it is just so enjoyable and easy to shoot that I hardly wanted to put it down.

Aesthetics * * * * *
I love how this gun looks. I wish that the grips came in a different color from the factory other than just black rubber, but that can be easily changed.

Handling * * * * *
The controls are right where you want them on this baby. The familiar 1911-style grip angle makes it easy to point and fire rapidly.

Accuracy * * * * *
Accuracy can be an issue in a featherweight gun. Not this one. The 22/45 Lite is a tack driver and just couldn’t miss steel plates, cans, or anything else I pointed it at.

Reliability * * * *
With new, clean ammo this gun runs like a sewing machine. Because a few of us had some issues with it with cheaper and old ammo, I have to take off a star, but I don’t really want to.

Carry * * * *
This isn’t a gun that you’ll probably use as your EDC, but it’s a great size for general use. It feels weightless in a chest harness like a Kit Bag from Hill People Gear, which is something that many backpackers and hikers may have. It is just so light that it makes everything easy.