Midwestern hunting is some of the very best in the world. Here in Michigan we have the most beautiful rural landscapes of anywhere in the country and deer hunting to match. The .450 Bushmaster has become the heir apparent to these lustrous hill and dales and has been steadily replacing the competition. Today, though, we’re going to be taking a look at something modern, but a bit more classic: the Ruger 77-Series 77/44 rifle in .44 Magnum.

There aren’t many guns that I’m truly taken by these days. I find that I spend my time with guns that are interesting, but rarely practical. Most just don’t quite do it for me. When I put my hands on something, I can almost instantly tell if it’s worth it or not. When I put my hands on the American-made Ruger 77/44, I knew right away that it was an extremely worthwhile gun.

If I were to describe this pistol caliber rifle in one word it would be ‘handy.’ The bolt action Ruger 77 rifle is lightweight, compact, and shoulders naturally. It has all the features of a classic, but at the same time is modern in its execution. It has a detachable rotary magazine, flip-up rear sight, and a safety on the bolt. For most deer hunters, young or old, there is hardly a better option. Most hunting in the Midwest happens at close ranges, usually inside 200 yards, with most shots taken on deer being at about 35-100 yards. The last shots I took on deer were inside these distances, as were the last dozen or so deer I have seen shot in my proximity.

The 77/44 is a most suitable gun for these circumstances and the .44 Magnum cartridge is exceptionally mild when shot from a rifle. The .44 Rem Mag round is superior to .357 Magnum in this type of gun due to the higher bullet weight for equivalent recoil.

The difference between the other .44 Magnum Ruger guns I have reviewed recently and this one are like night and day. The most powerful offerings I tested in the revolvers displayed high recoil and blast and weren’t particularly comfortable to shoot. The same loads from the 77/44 were so easy to shoot that even very young hunters could easily handle them. That’s a huge advantage of this rifle. A young person is often handed Pop’s old slug gun and told to go to town. The massive recoil of a 12 gauge doesn’t teach a youth about the fundamentals of marksmanship or hunting. Instead, it can give them a nasty flinch and the occasional black eye from a poorly mounted scope. Those things aside, a traditional slug gun is often too heavy to use well.

The 77/44 is very easy to handle and operate, even by someone with limited hand and wrist strength. The bolt is smooth and effortless to open and cycle. Cases eject easily and clear the action without an issue. I have hardly seen a bolt gun that’s so light and easy to use. The gun feeds from Ruger rotary magazines. You can load these rotary magazines and keep a spare in your pocket or load from the top. This is a little difficult, but can be easily mastered. The rimmed cases make it so that you have to push them down and in towards the rear, unlike a rimless case that you can just push right in. The magazines hold four rounds, plus you can load a fifth in the chamber. I like that the rotary magazine prevents the rims from binding and creating a jam.

Aiming the rifle is accomplished with either the attached iron sights or a scope. The gun comes with a set of scope rings. I opted to use the gun just as it came with the iron sights. They were right on at 50 yards, which is where I tested the gun for accuracy and velocity.

The general accuracy was around 2.5” with iron sights at regular deer hunting distance with all ammo tested. The 77/44 has a clean, crisp trigger and I was happy with this performance. I like that the gun shot to essentially the same point of aim regardless of the ammo used at most ranges. The ability to just grab a box of .44 Magnum ammo and hit the field is extremely appealing. 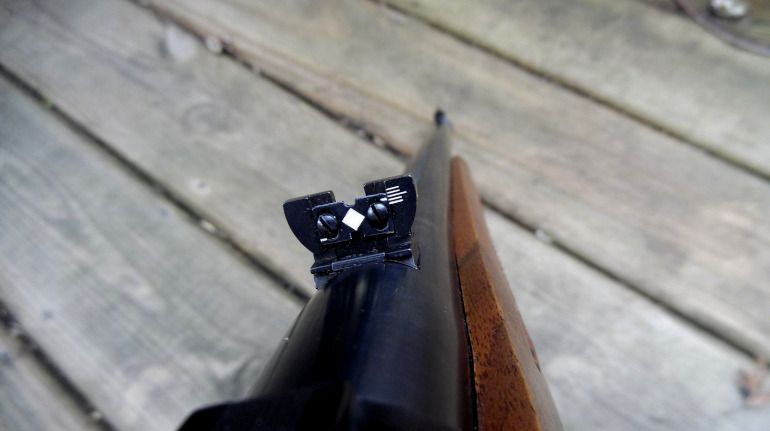 Another point worthy of consideration is the low cost of ammo compared to other hunting calibers. The .44 Rem Mag can be bought in great volume and also reloaded inexpensively.

.44 Special ammo can also be used and I played around with several types from SIG and Black Hills. This isn’t a long range rifle anyway and although the trajectory is wanting, the recoil and noise are extremely low and a young shooter can learn easily with minimal discomfort while using the same gun that will be used on opening day. Even with the popularity of lever actions, a pistol caliber rifle isn’t for everyone, but it is a very viable choice.

I love what Ruger did with this gun. The rifle is a joy to shoot and carry afield and it’s the envy of many from what I have seen. When I was testing this gun prior to deer season a few weeks back, I received all sorts of comments about it.

The 77/44 is legal for use in Michigan’s shotgun zones, but is little-known due to the .450 Bushmaster taking the spotlight in these hunting areas. I think this is a better and more logical option for a lot of hunters in close confines due to the 77/44’s fast handling and low noise levels compared to a 12 gauge or a .450 rifle.

Do yourself a favor and check one out at your local gun store. You won’t be sorry you did.

Accuracy * * * * *
This is a well-made, rock-solid little hunting machine. The gun shoots well with everything I put through it and it is ready to go right out of the box. I like that I can just grab a box and sit in a close blind with it and never have to guess about my shot.

Reliability * * * * *
I had no issues with the gun. It cycled reliably with everything I put through it. The detachable rotary magazine is a big factor in making this pistol caliber rifle reliable.

Ergonomics * * * * *
This is a traditionally stocked rifle that handles like a dream. The bolt knob is in the right place, bolt throw is short, the trigger is crisp with a clean break, and the sights come right up on target naturally. I love how the 77/44 gun handles.

Customize This * * *
Unfortunately, there is not much that can be done to this gun to alter it aside from adding a sling or optics. I don’t see why you’d add more than that, but some people get bummed about accessories.

Aesthetics * * * * *
The 77/44 is a nice looking gun and shares lines with both the larger Hawkeye rifles and some of the rimfire rifles Ruger offers. I love the look of blued stainless steel and a walnut stock, but it’s also available with a synthetic stock if you want to go that way.

Overall * * * * *
For the discerning outdoorsman and casual rifle shooter alike, this is a solid choice. If you already own a .44 Magnum revolver, the logistics are very simple. I think that the fast handling, low recoil, and ready-to-rock disposition of this fine, pistol caliber hunting rifle make it an excellent pick for the woods and trails alike.