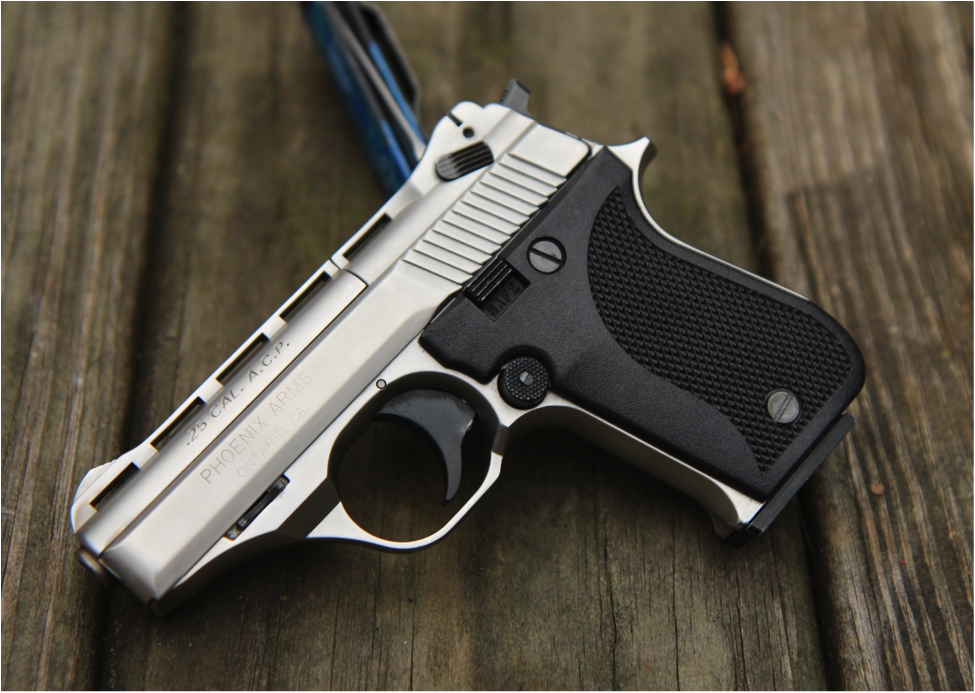 “The best concealed carry gun is the one you have on you”…unless that gun is a Phoenix HP25A, then you might as well carry a rock. What we have here is a Phoenix Arms HP25A. Phoenix Arms is located in Canada and they manufacture two guns, the HP22A chambered in .22 LR and the HP25A chambered in .25 ACP. They also sell different “range kits” for the HP22A, with different length barrels . . .

Here is the entire description of the HP25A from the Phoenix Arms website:

Phoenix Arms Model HP25A is a single action semi-auto .25 ACP pistol with a 9-round capacity magazine that provides a compact yet comfortable grip in a size of just 4.1 by 5.5 inches and a weight of 20 ounces. Features include 3-inch vented rib barrel, serrated trigger, adjustable rear sight, magazine interlock with a manual slide hold open, external hammer and firing pin block safety. Available in satin nickel or matte black finish.

Before going any further, it is critical to know the HP25A currently retails for $128 on Gunbroker as I write this. That is the New In Box price. Now that you know what the price point is, the rest will fall into place.

The HP25 is a neat little gun when you first pick it up. This little shooter is a great gun to hold. It is super small and the curves are so smooth and contoured just right, it caresses you hand as you sit on your couch and pretend you’re holding James Bond’s backup pistol. The nickel finish of the pistol is very good for its price point. There are no burrs or sharp edges on the pistol at all. You start seeing the detail that was put into such an affordable, and concealable hand gun, such as the rib barrel, adjustable rear sight, and the massive and super smooth undercut on the trigger guard.

Then you start to think this would be a really nice pocket pistol you could take to the office and use to fend off any disgruntled coworkers wielding shotguns. And you start thinking about how, even though it’s a .25 ACP, that is still better and more reliable than 22. And besides, shot placement is everything right?

And so what if it weighs 20 oz., everyone knows that quality things are heavy. Only real men carry full metal guns, right? You start thinking about how you can now start carrying this in your sweat pants pockets at the gym because it is so small. Maybe you could get an ankle holster, or give it to your wife as a purse gun. Then all of those dreams vanish once you understand the battery of arms of this pistol. Safety Queen
It is important to know the HP25A has two external, manually operated safeties. Now before you get all “but 1911’s have two external safeties”, slap yourself and sit down while I learn you something. On the HP25A, the safety on the frame locks the slide and the trigger. The safety on the slide operates the firing pin safety. Yes you read that correctly, a manual firing pin safety.

To turn off the firing pin safety, you move the lever up. To turn off the trigger/slide safety, you move the lever down. Maybe you are starting to see the problem with using this as a defensive pistol. I’d say you would have about a 50% chance of having both safeties in the desired position if you tried to use this pistol in a high stress situation.

It would be a slightly different story if you could just swipe you thumb down the side of the slide and frame to deactivate both safeties. But since you have to swipe up to turn off the firing pin safety, and down to turn off the trigger safety, you are asking a lot of your fine motor skills while some crackhead is trying to cut out your eye with a broken bottle (hey, I’m not gonna judge where you hang out).

If it doesn’t start with a 2, and end in ACP… oh wait…is that how it goes?

Yeah, this pocket cannon is chambered in the potent, popular, and practical .25 ACP. What’s that, you don’t agree with that analysis of the .25 ACP cartridge? Then join the club. The .25 ACP round is basically a more reliable alternative to using a rimfire cartridge for self-defense. It’s center fired, but at the same costs as a box of .45 ACP.

I find it incredibly hard to justify training routinely with this round. It is certainly not a “plinking” round due to cost, and I don’t advocate hunting anything with a 3″ barrel. This, I think, is the advantage to the HP22A, chambered in .22 LR. At least .22 is cheap (if not readily available at the time) and with their range kits, the .22 version might be a fun gun to plink around with.

Magazine
Yes that is singular, as it comes with only one mag. Remember those Magpul videos of pickup trucks running over PMAGs and them still working? Yeah, don’t do that with these. My 9-round magazine can only load five rounds. I think there is a bend in the middle of the mag which blocks the follower. I’m sure I can get it to load the full 9 if I disassemble the mag and get the bend out of the middle, I just haven’t taken the time to do it.

Disassembly
I hope you have your safety glasses on and brought you helper monkey. 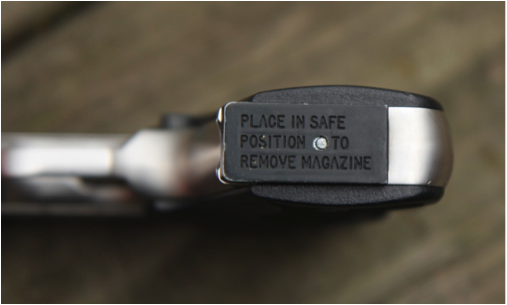 First, make sure the safety is off, the magazine is in, and the hammer is cocked. I am not kidding at all when I say this is the easiest way to disassemble this gun. All you need to do is slide the metal bar just forward of the trigger guard forward to let the barrel pop up. It’s possible, but not fun. The front of the barrel lifts up and the recoil spring shoots out. Then you are free to move the slide off by moving it slightly forward of its normal position, then it lifts straight off. Reassembling is a little tricky, but done in reverse of disassembly. I disassembled it a couple of times, then vowed never to try it again. Just soak the thing in Hoppes and call it a day.

Shooting Impressions
Snake-bite! That is my nickname for this gun because you get a lot of hammer bite due to a lack of an extended beaver tail. Believe me when I say I teacup held the $#!\ out of that pistol to see if I could mitigate some of that slide bite, but I had no such luck. The palm swell is so pronounced — and comfortable — that it forces your hand back into the strike zone of the hammer. Recoil is almost nonexistent. It’s a .25 cal, 20 oz. pistol, so of course it is a soft shooter. I equate it to firing a steel frame 1911 with a 22 conversion kit. Very minimal recoil, and rather quiet.

The trigger on this specific Phoenix is…broken? The trigger pull is a heavy single action pull, but the trigger reset, doesn’t work. I’m not sure if the trigger return spring is worn, or if the gun needed to be lubed better, but when I would pull the trigger and fire the gun, the trigger would have to be pushed forward with my finger. So rapid fire was impossible. Again, I do believe this is an issue with this gun specifically, and not necessarily all Phoenix guns, but that is a major issue.

Reliability wise, this never failed to cycle or fire. Every shot went through the gun, only the trigger seemed to have failed. 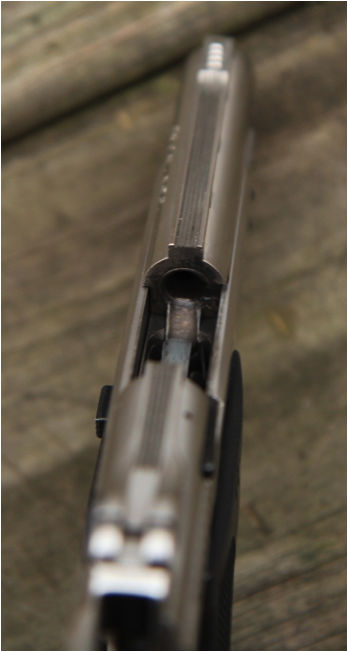 Drift adjustable sights on a 2″ barrel pocket pistol, LOL. Nice try, Phoenix. Almost had me sold on using this as a target pistol. That said, at five yards I was able to get groups in about a 3-inch circle which I think is pretty good for such a small gun. At seven yards, those groups really opened up, though. I don’t think it was the fault of the pistol at all. Because of the fixed barrel that doesn’t move while cycling, this is a rather accurate pistol. I think my groups just opened up because I could not find a comfortable way to hold the pistol. Add in the super-short sight radius and I would eliminate this as an option for your next bowling pin match. I think the .22 version with an extended barrel and sight radius as provided with the range kits could actually be a decent shooter — if your hands are small enough not to get bitten.

Overall
In the end, for the price this is a neat little gun, when/if it works. It’s a ton of fun to hold and play with, but unless you have the .22 version, it’s not practical to spend money on the high cost of .25 ACP ammo. If you are looking for a .22 plinking gun that’s fully metal for under $130, then pick one up. If you are looking for a CCW pocket pistol then look elsewhere.

There are far better option in far more potent calibers without two awkward manual safeties. For $128 gun, this thing is actually built pretty well. I’ve seen worse craftsmanship and refinement on brand new Ruger revolvers. If you get one that works, in .22, it’s hard to justify getting rid of it. Partially because a .22 would be fun to own, and partially because you can’t sell something nobody wants.

Style * * * *
This is a nice little gun for a nice price. Fit and finish are very good and it is quite comfortable to hold.

Ergonomics Carry * * * *
I have to give it four stars due to its size, though it is heavy. I highly recommend you NOT carry this pistol due to the two manual safeties.

Ergonomics Firing * *
Too much slide bite for my hands, but it might not be a problem for people with smaller hands.

Reliability *
I have to give it one star because the trigger did not reset, and the mag only held five rounds, but it did fire and cycle everything that was chambered.

Customize this * *
Phoenix offers different length barrels for the HP22A, and you can get different color grip panels off of gunbroker. That is all I have seen for this.

Overall * * *
In .22, this would be pretty fun. I will have to look into the trigger and the mag problems, especially since the cost new is $128. I would find it extremely hard to believe anyone would have buyer’s remorse over dropping that kind of money on a pistol with practically no resale value. It has the potential to be a lot of fun so long as it remains a novelty and isn’t taken seriously as a defensive firearm.