“Not everything has to be about urban combat.” That was my justification for considering a Mossberg 590 Shockwave. I knew my more tactically “woke” friends would harangue me if I reviewed one. Pistol-grip-only (often called “cruiser grip”) shotguns aren’t looked upon favorably by most highly experienced self-defenders.

I noted that the Shockwave doesn’t have a cruiser grip. Instead, it has a bird’s head grip called the “Raptor.” There are a few obvious advantages of the Shockwave Raptor over the traditional cruiser grip: legality and shoot-ability among them. The Raptor grip is mostly horizontal and brings the gun’s overall length to 26.5” which means it eludes NFA restrictions. That’s because the Shockwave isn’t actually a shotgun at all in the legal sense.

Shotguns, by federal legal definition, have a smooth bore, are more than 26″ in length and have a shoulder stock. The Shockwave falls into a middle ground category referred to as, “pistol grip firearms.” PGF’s aren’t pistols either. They are just non-NFA firearms.

Another important legal distinction is the receiver. It must have never been part of an actual shotgun (with a butt stock attached). If there was ever a butt stock on a receiver, it is a shotgun receiver and cannot legally be converted into a PGF. In other words, if you want a Shockwave, you can’t make one in your garage. Go buy one at the fun shop, no ATF entanglements, no tax stamp required. The negatives of the Raptor bird’s head grip are similar to those of the cruiser grip. Most notably, the lack of a shoulder stock makes accurate shooting and recoil management difficult. In reference to self-defense tools, my personal rule has always been if I wouldn’t take it to a high-round-count school, it’s just a toy. In which category, then, does the Mossberg Shockwave fall…tool or toy?

I could see some usefulness in the Shockwave as a motor home defense gun. Of course, the only way to find out for sure is to shoot one. I’ll have to wait to purchase one until Oklahoma straightens out the language in its statute regarding, “sawed-off shotguns” for that to happen. Fortunately I was able to locate a friend who had one in Texas which has fewer fun-hating state laws. Do your homework before purchasing one of your own.

The Shockwave’s Raptor grip is much more natural to hold and allows for improved recoil management compared to a cruiser grip. Because the Raptor is more horizontal, the wrist doesn’t get the same direct jolt as it does from mostly vertical cruiser style guns.

Much like a standard Mossberg 590, the Shockwave has a five-shot magazine tube, matte blue finish and a heavy-walled barrel. The choke is fixed cylinder bore as you would expect. The Shockwave’s barrel is 14.375″ compared to the standard 18.5″.

One addition to the Shockwave from the standard 590 is a strap on the forend.  That thing is priceless, not only in keeping a solid purchase on the gun, but particularly in recoil control. The Shockwave will accept aftermarket accessories like a Side Saddle. (Warren Wilson for TTAG)

Before making noise with the Shockwave, I did some dry practice. The Shockwave operates exactly the same as the full-size 590 pump guns. One of the reasons I prefer Mossberg over Remington in this kind of gun is the ambidextrous tang-mounted safety. I find the Remington crossbolt safety works well for me when a long gun is shoulder-mounted, but it’s really awkward in this configuration. Guns of this configuration tend to benefit from Mossberg’s ambidextrous tang safety. (Warren Wilson for TTAG)

There are essentially three positions from which this gun can be shot: 1) 80’s action movie – from the hip, 2) high pectoral, and 3) eye-level.

Shooting from the hip is rarely a term used for describing one’s best effort and I had my doubt about having any success from that position. The high pectoral position seemed promising. I could see the gold bead sight out of my peripheral vision while focusing on the target.

Dry firing from eye-level still didn’t seem quite optimal, but was mostly likely to produce hits on target…and to the shooter’s face, if he’s not careful. It should be noted that Mossberg specifically requests the Shockwave not be fired this way in their literature because it’s possible for recoil to force the pistol back into the shooter’s grill. I’ll request the same from readers for the same reasons. At seven yards, the Shockwave produced a group of just over six inches with standard buckshot loads. (Warren Wilson for TTAG)

The first trip to the range was just as giggly as I’d hoped. The first several rounds of birdshot made for some great fun. Then I got a little more serious and loosed three rounds of Federal Vital Shok buckshot at center mass of the humanoid target from the 80’s action star position at seven yards. No holes appeared in the high chest area where my vision had been laser focused.

As my vision softened, I saw a perfect clover leaf grouping…in the target’s face. The folks around me were very impressed until they saw my head cock in confusion. This is why we thoroughly test and practice with our defensive guns. 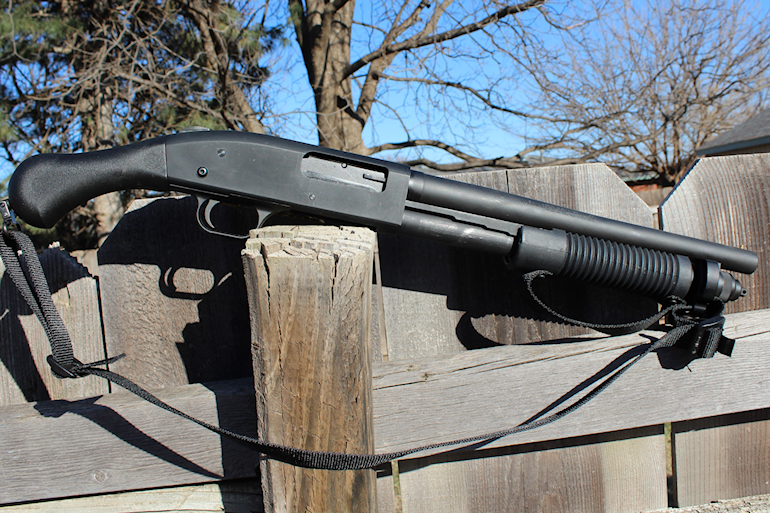 The Shockwave will accept either 2 3/4″ or 3″ shotshells. (Warren Wilson for TTAG)

I decided the buckshot portion of the Oklahoma Law Enforcement Shotgun Qualification would be a fair test of the Mossberg 590 Shockwave’s potential. The course consists of three rounds of nine-pellet buckshot at 15 yards and two rounds at 7 yards. The potential score is 90 with a minimum passing score of 63 (70%).

Any pellets inside or touching the oval 10.75” x 14” scoring ring are two points. Any pellets outside the scoring ring but still on the silhouette are scored as one point.

Most folks don’t find the course terribly challenging, but it certainly is a good starting point. I shot the course with the Shockwave at eye level with the Federal Vital Shok buckshot with FLITECONTROL wads. As you can see on the target above, I pulled one of the seven-yard shots high and to the right, but everything else was in the scoring ring. It would be difficult to score this target since the Vital Shok pellets land almost as one unit at that distance. I would score it at least three points down.

At the fifteen-yard line, the groups opened up to between 2.5” and 2.9”. Vital Shok with FLITECONTROL is the stuff! For reference, I fired a few rounds of standard buckshot from the 7-yard line. The groups averaged just over six inches. Overall, a score of 87 isn’t terrible, but it isn’t that good considering the buckshot I was using.

The other half of the law enforcement shotgun qualification is five slugs between 25 and 50 yards.  For giggles, I fired two slugs at 25 yards. I felt pretty good about my sight picture at ignition, but both sailed high left. Of course, this isn’t a slug gun, but I just had to try. Are these little shorty (non)shotguns as effective as traditional shoulder-mount guns for defense? No. I’m sorry, they’re just not. What they are, though, is handy as heck and a ridiculous amount of fun. A Shockwave plus ten bucks worth of birdshot equals grins galore.

That said – and at the risk of enraging tactical Timmys everywhere – I do see some limited, but legitimate defensive uses for the Shockwave. As a truck gun or used in a confined space, it packs a serious wallop. We often hear concerns over the barrel length of shorty shotguns, but the Shockwave’s 14-inch barrel patterns only slightly larger than my traditional pump-action 18-inch barrel tactical shotguns at seven and fifteen yards.
I believe the 590 Shockwave’s real potential will be realized with the addition of the Crimson Trace Laser Saddle. I’ve reached out to Crimson Trace for a review sample. Stay tuned.

Accuracy * * * *
For the sake of a shotgun-type firearm, we’ll refer to pattern size. This shorty gun holds an impressive pattern at the distances for which it was intended. The groups were only slightly larger than what I’ve come to expect from 18″ barrel shotguns.

Reliability * * * * *
Several of us pounded a few hundred rounds of birdshot, buckshot and slugs without issue over the course of a few days. The Shockwave offers the same dependability you’ve come to rely on from Mossberg’s other dependable pump-action shotguns with their twin action bars and anti-jam elevator. It will, of course, accept accessories like a side saddle or light mount.

Ergonomics * * *
The Raptor bird’s head grip makes this gun much more comfortable in the hand and in recoil than cruiser grips.

Customization * * * *
The Shockwave has swivel mounts ready for a sling. I had no difficulty finding loads of accessories for it.

Aesthetics * *
It’s not pretty, but it’s not supposed to be. If you use this firearm as intended, it will be even uglier with use.  Have fun!

Overall * * * *
The Mossberg Shockwave is exactly what I think it’s supposed to be. Tough, ugly, fun and effective in the right situations. That situation is extremely close-range like inside your typical residence.  If your home state doesn’t hate fun like mine does, go get yourself one.