As much as I have enjoyed shooting my 9mm-converted 5.56 lower, which uses a magazine well block insert to allow it to accept Colt-style 9mm stick mags, I definitely prefer normal pistol magazines and a lower designed specifically to accept them. Although, yes, this limits you to pistol calibers, it also reduces failure points, extra parts, and time spent tinkering and adjusting to get everything working properly. For much of this year I’ve casually kept my eye out for a dedicated 9mm AR-15 lower receiver that accepts GLOCK or other pistol magazines, and when Lone Wolf‘s G9 became available again I decided to pull the trigger and give it a shot.

Lone Wolf’s GLOCK compatible AR-15 lower receiver is basically a dimensionally-standard billet aluminum AR-15 receiver with one notable exception: it has been milled and modified to accept GLOCK magazines designed for small frame GLOCK pistols. Although 9mm is the runaway popular caliber here, you could also make yourself an upper for .357 Sig, .40 S&W, or .45 GAP, and GLOCK mags for all of those will work in the G9. The magazine well appears to be short enough to even accept “Baby GLOCK” mags, although I only had 33- and 17-round G17 mags and one 15-round G19 mag handy for testing (EDIT: LW confirmed that Baby GLOCK mags do fit).

The G9 is available in a handful of configurations. You can choose a carbine or pistol lower receiver and, if needed, you can also get a complete upper receiver (ordered and shipped separately from the lower to avoid excise taxes associated with the purchase of a functional firearm) in 16″ or 10.5″ barrel flavors. Actually, those are the standard lengths but Lone Wolf will custom-cut a barrel to whatever length you might want. On the pistol lower, there are various options for buffer tube styles with or without Sig SB-15 brace. I ordered up a G9 pistol lower with KAK buffer tube, but no Sig brace as I planned to repurpose the one off my other 9mm lower. Although this was probably the buffer tube I would have purchased anyway were I left to my own devices, I do wish Lone Wolf offered the option to buy a stripped lower. I’m going to end up swapping out the mil-spec / generic parts kit trigger and tossing it into a box with two or three other homeless LPK triggers, and I’ve already swapped out the A2 grip for something nicer. I don’t really enjoy having to pay for something I have no intention of using. Additionally, I ditched the generic buffer and spring after making sure the G9 functioned fine with them — which it did — and installed a JP Enterprises 9mm SCS. A completely stripped lower isn’t actually possible, as the magazine release is proprietary. It’s a pretty nice, oversized piece and it functioned smoothly. The rest of the parts are AR-15 standard, so feel free to swap out grips, triggers, receiver pins, bolt catches, safety selectors, buffer tubes, etc. Like most billet lowers, the trigger guard is integral.

So we know it accepts GLOCK magazines, but what about compatibility with various non-Lone Wolf uppers, bolts, etc? LW states that Olympic Arms upper receivers are not compatible. Other than that, it’s all standard AR-15 dimensions so, for example, my CMMG upper went right on. Now, if you already own a 9mm upper it is highly likely that your bolt is going to require some machining to work with GLOCK magazines. Most “9mm AR-15” bolts are designed for your Colt/Uzi/Sten mags, which do not taper at the top. Therefore, the bottom of the bolt — the part responsible for stripping a round out of the magazine — is wider. Too wide to fit between the feed lips of a GLOCK (or basically any other normal pistol) magazine. Some material is going to have to be removed. Your local gunsmith or machine shop can likely do the milling work, or Lone Wolf can do it for you — pay $45, ship your bolt to them, they’ll machine it and then ship it back. I chose to go this route just to make sure it was done properly. Unfortunately I forgot to take a “before” picture, but as seen above I highlighted the area where milling was done.

The lower is machined from a forged billet of 7075 aluminum and is Type 3 hard coat anodized. Any color you want, as long as it’s black. If black isn’t your thing, Lone Wolf will Cerakote lowers and uppers on request. Machining is clean, parts fit is just right, and the anodizing is even. 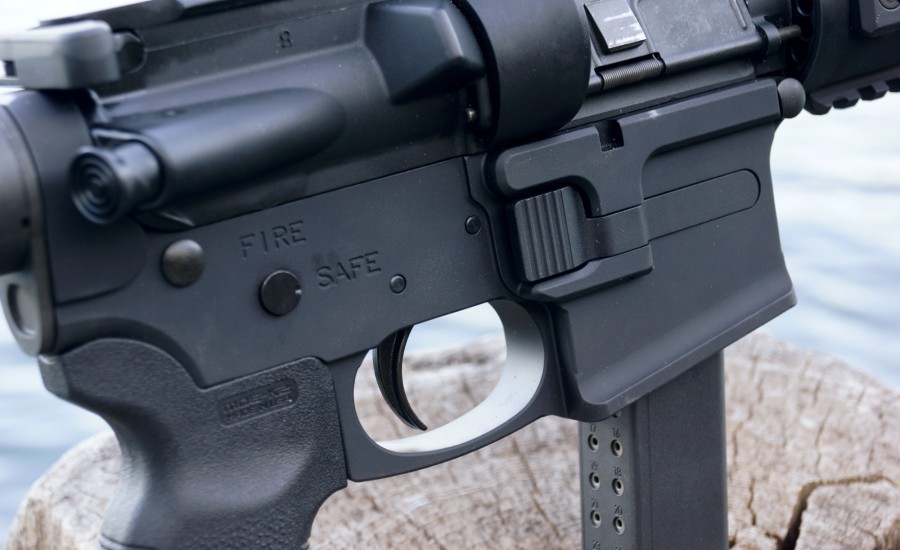 My CMMG upper fit on with a bit of torsional wiggle. No more than you’d expect mix-matching most random uppers and lowers from different brands and, heck, even with “matching” parts from a lot of manufacturers. Nothing I feel any need to address with a wedge or whatever. The G9’s flared magwell allowed for easy magazine insertion and empty mags reliably dropped free. Mag swaps are quick and easy and they lock in solidly. That oversized release paddle is great. GLOCK magazines are absolutely preferable for me to Colt/Uzi/Sten style stick mags. They’re easier to load to capacity and are more reliable, plus they’re lighter for a given capacity. Yeah, they’re more expensive per magazine but you don’t go through the ordeal of buying 5 mags just to find 2 that work reliably, like many of us have done with those aforementioned SMG units.

I’ve put a couple hundred rounds of cheap reloads plus two boxes of factory ammo through the G9 so far and have not had one single feeding, firing, extracting, or ejecting hiccup. It’s actually surprising how consistently it ejects the brass, as my previous experience with 9mm ARs had the empties going a bit all over the place in comparison. As you may expect, the Lone Wolf G9 is quite pleasant to shoot. The blowback action gives you enough feedback to be fun — much more feeling, thump, and action than shooting .22 through a similar firearm — but 9mm through a carbine is still a felt recoil pussy cat.

Only one “want” jumps out at me. I do wish it locked the bolt back on empty. The bolt release / catch is a standard AR-15 piece and works manually as it should, but there’s no provision allowing the follower of an empty magazine to lock the bolt back.

It can be tricky to get a normal pistol magazine to work in an AR-style lower receiver, but Lone Wolf seems to have nailed it here. Magazine angle and placement are spot on, and the proof is in the reliable feeding and ejecting. I can even feed rounds into the chamber in extreme slow motion while guiding the charging handle forwards. Considering the minimal feed bevel on the barrel, it’s quite impressive how smoothly and precisely the rounds glide in. Set up as a Sig-braced pistol like mine — or, better, a registered SBR with a shoulder stock — with a short barrel and a suppressor on it, this really might be the ideal home defense firearm. It’s short and maneuverable, yet extremely stable thanks to brace. It’s significantly easier to shoot accurately and rapidly than a pistol, regardless of your level of training. AR-15 rail space means you can mount optics and lights and whatever else (just don’t forget — no vertical forward grip on a pistol). A 33-round GLOCK magazine full of 147 grain Federal HST should handle it, whatever it may be, plus you can shoot this thing in an enclosed space without suffering hearing damage.

I’m going to get my hands on a couple more 9mm AR-15 lowers, ideally GLOCK mag ones, to do a little comparo work. However, Lone Wolf definitely knows GLOCKs and they’ve created a really nice piece in the G9 that runs like a top.

Slightly better than your average mil-spec AR-15 lower, as the mag release paddle is oversized. The rest of it is standard parts kit fare, though.

Reliability: * * * * *
I’ll keep putting rounds through this thing, but considering how well it feeds and how consistently it ejects, I don’t see anything changing. It’s pretty darn solid. Most pistol magazine AR-15 lowers aren’t up to this level.

Trigger: * * *
Average, as it’s a mil-spec trigger but it’s definitely better than some other parts kits triggers I’ve felt.

Customize This: * * * *
Aside from the magwell and the magazine release, it’s a standard AR-15 lower receiver. This leaves you open to near-infinite options for customization.

Overall: * * * *
I really dig the 9mm suppressed AR pistol genre. It’s a lot of fun to shoot and it’s great for HD. A purpose-built 9mm lower is functionally better than a modified 5.56 lower. Lone Wolf’s G9 is a good one.