(This post is an entry in our spring content contest. The grand prize is a Beretta APX pistol. Entries are closed and we will announce the winner one we have run the best entries received.)

Going back a ways to the early 2000s, back when President Bush 43 was still in office and the media was actively hounding him instead of just parroting Obama blaming him, Kel-Tec was making tiny affordable compact pistols like the P-32 and P3AT. Long before their bullpup designs like the RFB, KSG, and RDB, they released a traditional rifle with a twist. It folds in half just like their SUB2000 pistol caliber carbine.

At first they made the SU-16A, a 5.56x45mm chambered carbine with a folding stock for better storage. But just like the SUB2000, it couldn’t be fired when folded. Then they came out with the SU-16B. Same overall design with a shorter pencil-thin barrel. People still wanted a rifle that could be fired while in the folded position.

So Mr. Goerge Kellgren obliged and came up with the SU-16C. Finally, a folding 5.56x45mm carbine that can be folded and fired while folded (That’s a lot of folds right there).

Anyway … here are the specs:

The Barrel itself is a nice medium contour with a 1;9 right-handed twist and a crowned threaded end that is 1/2×28 and accepts all standard AR-15 muzzle devices like flash hiders, muzzle brakes, and suppressors.

Design-wise it is an interesting little mix. Many people believe that the SU-16 uses an AK-style gas system and that’s partially correct. It actually takes the majority of its design from the Beretta AR-70 series of rifle.

The main difference is for ease of manufacturing. The gas piston is permanently attached to the bolt carrier group much like an AK. That’s why a lot of folks think it’s more of an AK in design. The upper and lower receivers are made out of polymer. That helps with the light weight of the rifle. The handguard can actually be opened and used as a bipod. Personally, I use that feature less for shooting and more for cleaning.

Speaking of which, cleaning is a snap since unlike an AR-15 it doesn’t deposit all that carbon gunk right in the chamber area. Instead, most of it is captured by the gas piston head. Everything internally is finely machined. Not tool marks, burrs, or molding seams visible. Everything is smooth and well finished.

The rifle feels lightweight, but not cheap. Even its dust cover is made out of a polymer mix and that in of itself feels well made for just being a little sliding bit of plastic on the side of the bolt carrier. It even comes with a Picatinny rail on top of the receiver to mount optics. All in all, for the price that your average buyer pays for one. It’s a well-made rifle.

I found this rifle used and purchased it for the sole intended purpose of a truck gun. Before I always kept my GLOCK magazine-compatible SUB-2000 in the truck, but the wife claimed it as her own. Being that space in a motor vehicle is always at a premium, I wanted something as compact as I could get. So with that in mind I started looking and lucked out and found mine at a pawn shop in the panhandle of Florida.

My wallet lightened by three bills, I went to the range. The accuracy on this rifle surprised me. At 50 yards from the bench I had no problem with my horrible vision and iron sights doing this. 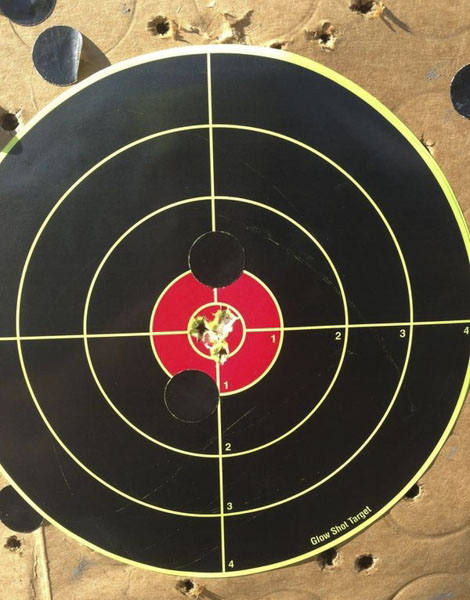 That little Kel-Tec sure loves Winchester Ranger 55-grain SP 5.56 ammo. I used a whole gaggle of standard AR-15 magazines. C-Product GI Aluminum 30-round magazines, Magpul Pmags, old Colt-marked GI Aluminum 20-round magazines, even a Troy Industries Battle Mag. All worked fine and the best part is that they work with the stock folded.

The stock has a small opening in it to allow a 30-round AR magazine to slip right on through. You can deploy the stock with a magazine in place and have no issue whatsoever. Ammo-wise other than the Winchester Ranger I fed it, steel-cased Wolf and Hornady, brass-cased PMC and Remington UMC. No hiccups at all. It ate what I fed it.

Other than the lightweight handiness and accuracy, the ergonomics of the SU-16C rifle also are nice. A simple crossbolt push-button safety is easily within reach of the shooting hand and the magazine release is also the same. The semi-shaped pistol grip is plenty for the hand to find a good purchase. The buttstock, when locked open, feels stable and secure. Same with it closed. Lastly, the charging handle also works as a shell deflector so you can shoot this rifle as a righty or a lefty. No problem at all.

Now on to storage. That was the whole reason I bought this rifle and why, if you’re looking for a compact storeable rifle, this is one you should look for, too. I think this picture speaks louder than words. In that tiny space I’m able to fit a full-functioning 5.56x45mm self-defense carbine and still have room under the seat for a bug-out bag and all the other goodies.

Instead, I can keep a plate carrier, get-home bag, ear protection, and active-shooter kit with medical gear. This rifle fits just about anywhere. The only negative I found with the rifle is the sights, while they’re well made and superb. Both the front and rear sight are metal and the front sight post uses an AR-15 front sight post. The layout of the rifle makes it hard to co-witness most optics due to how low the sights are positioned in relation to the sight plane. So if you want to co-witness, you need to get one of the tiny micro red dots. I have a bunch of old ancient turn-of-the-century AimPoints. Sorry Charlie, they ain’t gonna co-witness on the 16c.

The other issue is the rifle doesn’t come with any way to mount a sling. You can buy a sling kit form Kel-Tec or you can get an aftermarket one, but there’s no out-of-the-box mount.

Accessories wise, there are a ton of options. Kel-Tec and a growing aftermarket industry make railed forends, different stock options, and other gizmos for the SU-16C. They even make an assembly that allows you to use an AR-15 buffer tube and stock.

In the end, the Kel-Tec SU-16C isn’t the latest “tacticool” whiz-bang AR-15. But it’s a handy, capable rifle for its intended purpose. Something to throw into the trunk/truck when things look sketchy or when someone wants a lightweight storable self-defense carbine.

Price-wise, you can find them new for about $500-$550 and used between $300-$400. They come with a lifetime warranty and Kel-Tec products come with amazing customer service. But you won’t be needing that since they make a great product that isn’t going to be needing a trip back to the factory. The gun handles great and works well.

So would I recommend this rifle to another person? You betcha!

Ratings: (Out of Five Starts)

It’s a handy, lightweight, compact rifle that’s user friendly. Even the lightest AR-15 wishes to be as skinny as the SU-16C.

No problem hitting the target at ‘bad guy’ distances.

A smaller market and fewer choices for co-witnessing optic. But the options are there.

Feeds well and ate everything I gave it without a complaint. Only thing is the receiver is polymer. So long-term wise, you probably can’t abuse it like an AK by using it as a shovel or pry bar.

That’s where it’s the king. Try to find an AR-15 that can do the same.

It’s handy, lightweight and simple to operate. No recoil and everyone, even novice shooters, can master it.

It’s a small compact 5.56x45mm carbine that’s reliable and handy. It isn’t a battle rifle, but or a truck/trunk or home defense carbine (or even varmint hunting), I wouldn’t at all feel under armed with it.

I can recommend one without a problem.

More from The Truth about Guns: