JP Enterprises is the gold standard when it comes to competition rifles. Take a look at the gun rack at a pro series 3-gun competition and you’ll see what I mean — if a competitor isn’t using a gun made by their sponsor, there’s a 90% chance they’re shooting a JP rifle. The reason is pretty obvious, since John Paul puts a TON of time and effort into making them “perfect” rifles, and having played around with some of his designs I completely agree about their quality. So when I heard that JP was putting out a 9mm AR-15 carbine, I was all over it . . .

We here at TTAG have covered our share of 9mm carbines in the past, and in general we’ve been pretty disappointed. For example, the JR Carbine that Tyler reviewed had so much potential but turned out to have one annoying quirk after another. Other designs have similar flaws, leading us to believe that a reliable and accurate 9mm carbine was the white unicorn of the firearms world. And then JP’s rifle showed up at my FFL. 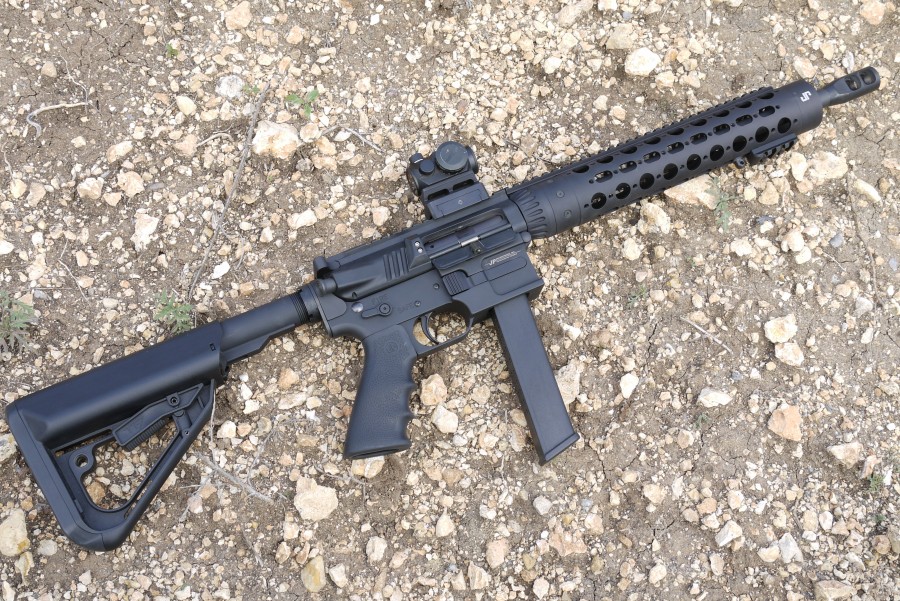 The point at which other designs start to go off the rails is when they decide to ditch the AR-15 platform and build something else. Love it or hate it the AR-15 is a proven design that’s about as slimmed down as you can get a gun, so simply re-chambering it in another caliber is a no brainer. With a 9mm carbine, though, the issue is figuring out how you’re going to get the gun fed. Since the Glock magazine uses a different locking mechanism as well as a different form factor from the standard AR-15 magazines, JP had to re-engineer everything from the magazine release to the internal design of the receiver itself. At the end of the day what his team of engineers came up with is one of the more ergonomic and logical magazine catch / release systems I’ve seen on a pistol caliber carbine. The downside is that this is primarily a gun for right handed shooters (as there’s no way to add an ambidextrous magazine release in this design), but for most Americans it will work just fine.

The reason for the Glock magazine compatibility, according to JP, is that this gun was designed to be marketed to law enforcement and military users. The MP5 is an aging platform, and JP’s rifle offers reliability upgrades as well as compatibility with existing gear (the duty Glock 17s) for most police departments. There exists a full auto version of this gun, but JP declined to send it out for review. Something about that pesky ATF . . . The controls on the gun are almost identical to the standard AR-15, with one awesome exception. JP has a non-reciprocating side folding charging handle that he offers on some of his guns, and he slapped it on this one as well. The standard charging handle is present and functioning, but this also gives you the option to use the bigger and easier to grip latch in its place. In case you couldn’t tell, I’m a big fan of that.

The gun seems well designed. It handles well, points well, and looks goddamn beautiful. But how well does it shoot? While the full auto version might be marketed towards LEOs, the civilian version is being marketed as a cheaper option for competition shooters. It’s a valid use case, since most matches will allow you to run a pistol caliber carbine if you really want to and the guys in Trooper Division will love a new (lightweight) pistol caliber rifle to stick in their bag of tricks. And when you’re firing the gun, it’s an absolute dream. The trigger is light and crisp, as one would expect from a fine competition rifle. The operating controls feel positive and satisfying. And the recoil is almost nonexistent thanks to the low energy rounds and the muzzle brake on the gun.

Oh, and it shoots pretty well too. That’s a 10 round group at 50 yards with standard American Eagle ammunition. JP claims that the rifle is accurate to about 3 MoA with good ammunition — I’m getting 2 MoA instead. Most of the rounds passed through that center hole with three close fliers. For a pistol caliber rifle, I’m actually pretty impressed.

The GMR-12 is a dandy rifle all by itself, but when you consider the price and the options it gets even better. You’d expect something by JP Enterprises to be astronomically expensive, but this gun clocks in at a modest $1,499. It’s not cheap, but considering the cost of a SCAR 16S or a Tavor SAR it’s not outside the price range of most people. And for the quality and the craftsmanship you get, I think it’s worth every penny.

If you don’t have that kind of change lying around, JP also offers the upper as a standalone drop-in replacement for your existing AR-15 for a mere $799. They also have a magazine well block and a new buffer available on their website so you can easily retrofit your existing gun for the delicious 9mm snacks. Oh, and did I mention it just looks bad-ass? Yeah.

Ergonomics: * * * * *
The free floating handguards feel silky smooth and comfortable to hold onto. The grip is perfect, and the gun handles like a dream. The Ferrari of the pistol caliber carbines.

Ergonomics Firing: * * * * *
No recoil, a delightful trigger, and no muzzle rise. All it needs is a can to eliminate the noise and it’s perfect.

Customization: * * * * *
It’s an AR-15 in all the places that matter, and if you don’t want the special lower receiver then you can get just the upper and supply your own.

Overall Rating: * * * * 1/2
The only downfall is the price, which I think is a fair deal for the package. But knock about $200 off that sticker and it’s perfect.