GLOCK has finally jumped into the .22LR market with the G44. There’s plenty of demand for semi-automatic rimfire pistols because of the affordability of ammunition and the guns’ low recoil. But is it worth it? I put this one through 1000 rounds using ten different types of ammunition so let’s see what I learned. The first big advantage is ammunition. You can find .22LR at any gun shop, Wal-Mart, Fleet Farm, etc. Well, you could before the runs on guns and ammunition in March and again in the last week or so. But given time, the supply is sure to catch up and prices will stabilize. 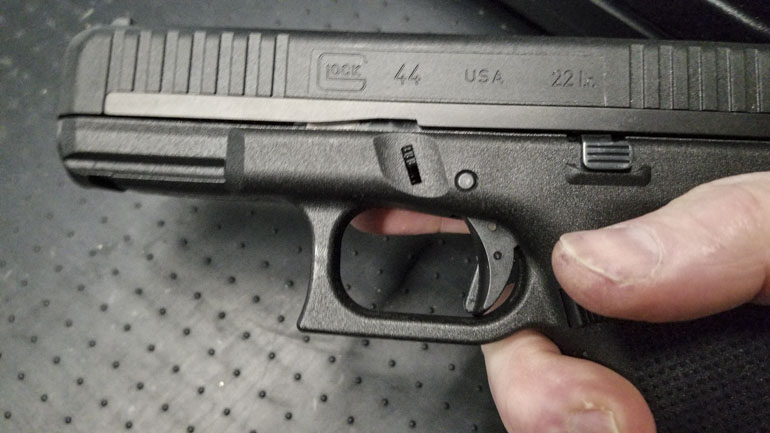 The GLOCK G44 is built on a compact frame which means the pistol will fit almost any holster designed for the uber-popular GLOCK 19. The slide release and takedown tabs are in the same location as the other frames. One nice improvement over my older Gen4 GLOCKs is the slide release is ambidextrous. The magazine release is in the same familiar location and is easy to depress allowing the magazines to drop with little to no resistance.

During testing, every magazine dropped the first time, every time.

My first thought when I removed the US-made G44 from the box was, wow, this thing is really lightweight. It almost felt cheap, as it only weighs 12.63oz.

I removed the slide and that’s when I realized almost all that missing weight is due to the slide. The GLOCK 44 uses a simple-blowback action, which means the recoil is generated by the case being forced back by the expanding gas. In this system, the bolt isn’t locked in place, but instead rests against the rim of the round. When the rim is struck, the powder ignites which increases the pressure, forcing the bullet down the barrel.

This pressure also causes the case to obturate, or expand to seal it against the chamber. Once the pressure starts to drop the brass will contract slightly and break this seal along the chamber walls. The pressure inside the barrel is then able to push the case rearward to cycle the next round. This system of recoil differs from larger centerfire rounds which typically use a delayed blowback system. For this reason, the slide needs to be light enough so it can fully and reliably cycle.

While other gun makers lighten their slides by using aluminum or zinc, GLOCK achieved the light weight needed by designing a steel-polymer hybrid slide.

While I’ve shot a lot of GLOCKs over the years, I’ve never been a big fan of their triggers. I always felt they were a little bit sloppy. The GLOCK Safe Action Trigger has a bar between the trigger and the mechanism that releases the striker. However, with the G44, I found it to be very tight and crisp…no slop at all. I tested the trigger pull several times and found it to fall in the 5 and 5.5-pound range. 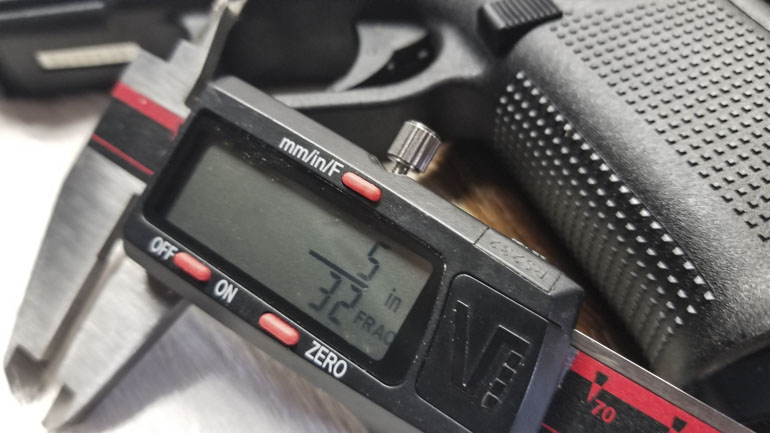 I also measured the distance between full trigger pull to reset, this came in at 5/32 of an inch. Overall, the trigger impressed me. The G44 comes with four additional backstraps. This gives you five total options for grip size which should fit just about any shooter.

The backstraps are easy to install. Simply use the included punch to push out the standard pin on the rear of the grip, set the extension in place, and put the included longer pin in that same hole. The sights are standard polymer GLOCK sights which are drift. I’m not a fan of GLOCK’s sights. I really wish they would provide better ones standard. Even at the full extension of my arm, the difference in size between the front sight and the opening of the rear sight leaves a lot of room for error. Good thing we have plenty of aftermarket options.

This is a question that’s hard to answer. Everyone has a different set of hands. The short answer here is, if you like how any other GLOCK feels in your hand, this one will feel much the same. If you don’t like GLOCKs, well, you probably won’t be a fan of the G44 either.

My overall opinion of the G44 is this is a good gun to spend the day at the range plinking. GLOCK says it’s designed for beginners, experienced shooters and everyone in between. This means you can shoot a 1000 rounds and not spend a fortune. The advantage of this is working on grip and trigger control. Getting that muscle memory in place for when you move back to the larger caliber handguns.

Now comes the fun part, testing different ammo. Before anyone comments about the groupings shown, I wasn’t really trying to be all that accurate here. I was testing for reliability. Accuracy came later. 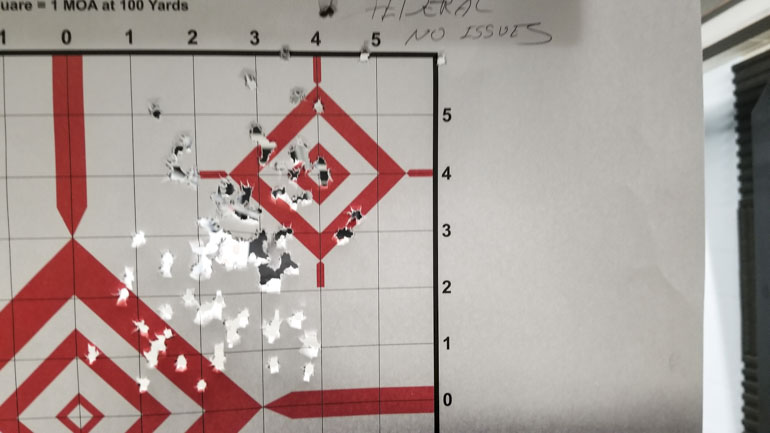 Many of the ammo types gave me no problems. I will provide a rundown of each manufacturer, bullet weight, and velocities below, as well as issues those rounds had if any. 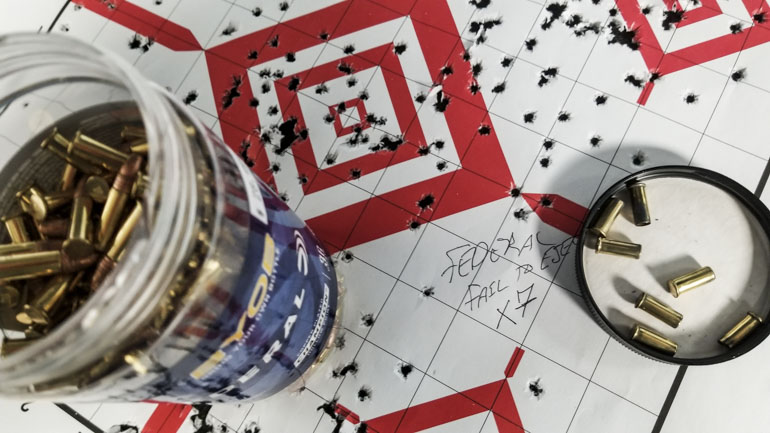 Here’s an example of one that gave me problems, these Federal rounds had seven failures to eject out of 100 rounds fired.

This round didn’t work at all. I only fired ten rounds of these Aquilas and I had to manually cycle the slide on every round. That really didn’t surprise me due to these being subsonic. If you choose to get a G44, be aware that low pressure subsonic rounds will likely not cycle the slide. This may be different with a suppressor. I mentioned impressive the fireballs from the CCI stinger round. Here’s a fire ring captured during testing. Other than the occasional stovepipe and one round that failed to fire, all 1000 rounds I ran did very well, excluding the subsonics. Let’s take a moment to talk about the magazines. There’s a tab on both sides that you pull down to lower the follower and load the rounds. You pull it down a bit, put in the round and move onto the next one. But, there’s one area to be mindful of. Because of the rims on these rounds, you need to be careful that each round is loaded in with that rim in front of the rim round before it. They need to end up in the magazine like the picture above going from left to right. If you fail to do this you will get rim lock and the firearm won’t cycle.

This is very easy to avoid by following these easy steps. Pull the follower tabs down just enough to place the round in place like this, then let the tab up a bit to contact the round below it. Next push the round all the way back. Doing this will ensure you never get rim lock. If you pull the tabs all the way down and drop rounds in, you’re going to have problems. When I started testing, I simply took the G44 out of the box and started the test. I did no cleaning. The only thing I changed was putting the large beavertail strap on the grip. Once I got back home, I did a full breakdown. Like other GLOCKs before this one, it is a very simple task. Because .22LR has a straight blowback recoil system, more of the gasses end up back in the frame. This makes for a relatively dirty firearm. After a bit over 1000 rounds, the firearm neeeded a good cleaning. Because .22 ammo tends to be dirty, it’s always a good idea to clean any .22LR firearm after use.

I spent three and a half hours shooting over 1000 rounds with the G44 and I went home feeling no worse than when I got to the range. My hand wasn’t sore or tired, my arms didn’t hurt, and my ears weren’t ringing. Granted, my wallet was a bit lighter having burned through around $70 worth of ammo, but this is far less painful than blowing through $200 worth of just about any other caliber. The G44 lets you get lots of range work in comfortably and affordably.

Style and Appearance * *
The G44 looks no different than any other Gen5 GLOCK. It’s a GLOCK, that’s really all I can say. You either like them or you don’t.

Customization * * * * *
This is where GLOCKs really shine. The aftermarket choices are endless. You can literally change so many parts on a GLOCK with aftermarket items that you will end up with a gun that’s not even GLOCK.

Reliability * * * * 1/2
The only issues I had were due to the ammunition. Every time I pulled the trigger with over 1000 rounds the gun went bang with only one fail to fire. Is that the fault of the G44? I can’t say for sure, so I had to count that against the G44 along with a few failures to eject. But as .22LR semi-automatics go, the G44 is extremely reliable.

Accuracy * * * *
Don’t judge by the photos above. The G44 is more than accurate enough for its intended use of plinking and training.

Overall * * * *
The G44 isn’t going to win any beauty contests or be the first gun you pull out to impress your friends. But it’s very reliable and easy to shoot. This doesn’t make the G44 a bad handgun. I may love my Desert Eagle or my S&W 500 magnum, but those aren’t the handguns I reach for first when I decide to just get some shooting in. The G44 is an easy-shooting, reliable handgun that’s perfect for extended range work or teaching a new shooter.

All images courtesy the author unless noted.