Designed in 1983 by Robert Hillberg, the Compact Off-Duty Police or COP pistol is my favorite “solution in search of a problem.” The 28 ounce, all stainless, top loading derringer was ostensibly created as a back-up gun for police in the days when magnum wheel guns reigned supreme. With a similar footprint, lower capacity, worse trigger and sights, and greater weight than a J-frame snubbie, the COP was a spectacular commercial failure. Much-maligned for poor its accuracy and punishing recoil, the high-priced holdout was quickly dismissed as a quirky footnote in the annals of firearm history. But was that derision warranted? Here we have a plain blue box with silver trim. Open the lid and you are rewarded with an all stainless gun resting on a bed of the finest crushed velvet and molded plastic available. Also included is a warranty card and seven-page illustrated manual.

The overall effect is surprisingly classy, and a huge improvement over Ruger’s cardboard boxes. It’s nicer, though less practical than even Smith & Wesson Performance Center cases.

In a word, good. With all its flaws, no one can argue that these guns were poorly made. The grips fit nicely, following the lines of the pistol very well. The backstrap is heavily contoured, and one can only just barely feel the seam between it and the frame when running a finger over it.

There is a slight amount of lateral travel in the large slab trigger, but so little that I only noticed when I deliberately checked for it.

About that trigger… it is long and heavier than any other gun I own. How heavy? No idea. I couldn’t find anyone whose trigger gauge could measure it. The flip side is that it’s smooth and even. Not as smooth as a Performance Center or LCR, but smoother than a GP100 or standard S&W. 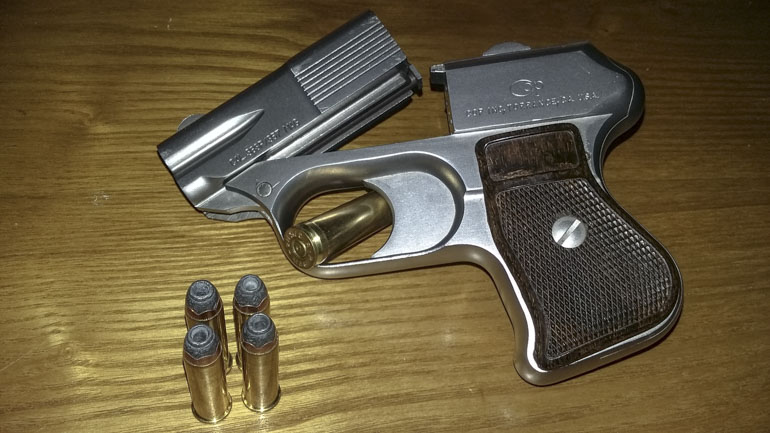 Loading is as simple as pulling back on the barrel release, which doubles as the rear sight, and tilting the four barrels forward. Pop in four rounds, snap it closed and you are good to go. Pull the trigger four times and repeat. The only safety is that extremely heavy trigger pull.

Each pull cocks the internal striker and rotates a plate behind the firing pins, firing the barrels in counter-clockwise order.

Cleaning is as simple as you would expect, and then some, thanks presumably to the permanent “MolyKote” coating the entire gun is treated with. I have never once had to scrub this gun, no matter how filthy the ammo I run through it.

Smith, Ruger, and anybody else who makes stainless guns should find out what this coating is and use it. It is seriously that good. The COP is 5.5 inches long and 4.1 inches tall. It’s certainly compact, surprisingly similar to an LCP2 in every aspect save two.

The COP is about two tenths of an inch wider, and almost twice as heavy empty as the LCP2 is loaded. The extra width is only a mild issue when trying to conceal in a pocket, and it actually carries surprisingly well, despite the weight.

First, the positives. Recoil was negligible with both the .38s, feeling somewhat akin to shooting a full-size, all-steel 9mm, and not bad at all with any of the .357s. The MagTechs had the stoutest kick, but I would put it on par with an Airweight J-Frame or LCR in .38. The recoil characteristics of this gun have been highly overrated.

Likewise, the trigger wasn’t much of an issue, its smoothness mostly compensating for the pull weight. Inexperienced shooters or those not familiar with revolvers would probably have quite a bit of difficulty with it, but for the target market — revolver carrying cops — it wouldn’t be a particularly difficult transition.

This is a surprisingly difficult point to address with this gun. For most guns it’s a simple yes or no, maybe with an ammo related caveat here or there. With the COP the answer is yes, when it’s clean and/or using ammo that it likes.

When freshly cleaned it will fire almost anything you put through it, unless the ammo has a harder than normal primer. After about the third set of shots, things start going downhill, with some ammo types sticking in the chambers (particularly the top right one on my example) and light primer strikes become more and more common.

Sounds pretty straightforward so far, except that it will remain totally reliable on ammo that it likes. In this case, the Winchester white box ammo never had a single issue, while both 158 grain Magnums both had problems. The MagTech ammo never stuck in a chamber, but did have several failures to fire, though these may have been the ammo’s fault as the primers were just as deeply dimpled as the ones that fired. Fired cartridge is on the right. Or lack thereof. The worst offender was the 158 grain .38, which consistently would put one round at most on the 8.5×11 paper at seven yards. Ouch.

All three magnums would put three rounds on the paper and one flier completely off, the flier was completely random as to which barrel it would come from. I can’t attribute it to shooter error, as it happened every single time, and never happened once with the Winchester ammo. This was the best group of the day at seven yards, and was the last group with the Winchester. No, I’m not just a terrible shot. I have shot tighter groups at twenty yards with my LCP2.

Three of those rounds key-holed at seven yards. Everything consistently key-holed from the top two barrels, except for the MagTech ammo, which would have shot the best group had all four rounds fired. This was the only group where one of the bottom barrels key-holed. This gun showed a strong preference for the two 125 grain offerings.

So, does the COP pistol deserve the hate it gets? Yes and no. The two most often derided characteristics, recoil and trigger pull, are nowhere near as bad as people claim. However, accuracy is abysmal and reliability is more dependent on ammo selection than any auto-loader I have ever owned.

I don’t feel that the gun is reliable enough or accurate enough for carry, except maybe as a last ditch bad breath distance holdout with carefully selected ammo. Maybe.

So why do I like it? First off, it looks cool. Secondly, it is insanely fun to shoot, even as picky as it is. The COP is a blast, or four. Usually.

Accuracy: *
With most ammo I would half expect one round to miss, even at contact distance. Find a round it likes and it will kind of do its job, most of the time.

Ergonomics: * * *
Don’t expect a four-finger grip, and you won’t be too disappointed. The rounded edges fit my hand quite well, and it points naturally. The only issue with the design is the weight.

Reliability: * *
If you find a round it likes, this could be four stars. It will go bang every time with the right food. Finding that round is the hard part, though, and most of what you shoot will likely give you fits. Finding a round that’s 100% reliable and won’t key-hole is a lofty goal, indeed.

Customization: *
I saw black grips for the COP online once.

Overall: * * 1/2
If you like that futuristic-according-to-the-eighties look and you have too much money, you’ll love it. If you want a useful firearm, look elsewhere, or commit to finding that Goldilocks round that actually works in the COP. Am I glad I own it? Yes. Would I buy it again? Not a chance.