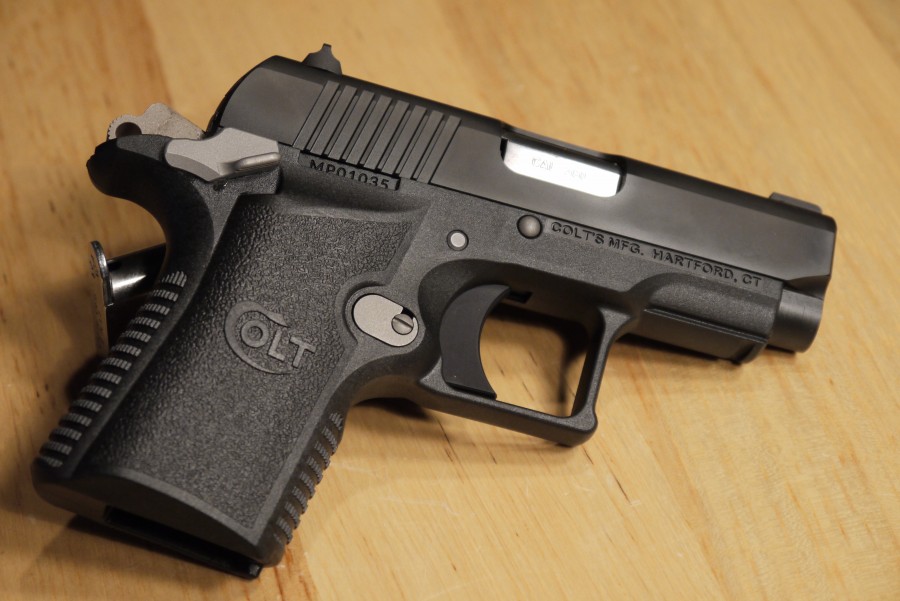 Concealed carry guns are about the fastest growing segment of firearm sales these days. With the number of concealed carry permit holders skyrocketing and the impending addition of the Land of Lincoln to the list of places where the right to defend yourself outside your home is recognized, gun manufacturers have been cranking out pocket-sized heaters faster than the bon-bons at Lucille Ball’s chocolate factory. And while some of those guns have been real winners, there have definitely been some real stinkers as well. Colt’s .380 Mustang XSP is a brand new polymer-framed version of their classic Mustang pocket pistol, but is it an improvement? . . .

I carry a 1911 handgun as my concealed carry gun. I used to lug a full-sized nickel plated 1911, but I’ve traded down to a more compact version recently. Before the 1911, I carried a full size SIG SAUER P226. So when it comes to concealed carry, I like to err on the side of accuracy and caliber over concealability. However, the brutally hot Texas summers have forced me to re-think that approach. I’ve even  resorted to toting a small revolver at times. While I prefer my larger carry gun, there’s a time and a place for a small mousegun like the Mustang XSP.

I said a gun like the XSP, but probably not the XSP per se.

The Mustang series of handguns is essentially a scaled down 1911. John Browning designed the original 1911 for Colt, and they’ve been milking the crap out of the classic ever since. And who can blame them?

The Mustang XSP takes down just like any other 1911, has the same general appearance and functions much like its bigger brothers. However, there are some minor mechanical differences (such as the trigger pivoting around a pin instead of coming straight back, like the original design). There’s also a nifty addition for this new version, a small accessory rail under the barrel to mount things like lights and lasers. It’s a nice touch and if I were carrying it, you bet there’d be a Crimson Trace product attached right there. Just like the 1911, the XSP is a single action affair with a single stage trigger and single stack magazine. However, with the Mustang, you can cycle the slide with the safety engaged. This was something I really liked about the 1911. Specifically, if the sear ever gave out, it would only fire one round before the safety stopped the slide from moving back and cycling the action. With the Mustang, you could theoretically slam-fire the entire magazine, all six rounds of it. But more kvetching about that later.

The safety is extremely easy to flip off, but difficult to re-engage. Probably not a major concern for those who are looking to use it as a concealed carry gun, as the whole point is to be able to use the gun quickly. But the size and position of the safety make it awkward to use, especially for those with large fingers. Unless your hand is in just the right position, it gets difficult to manipulate the safety.

Getting your hand in the proper position is much, much harder than it looks. The grip on this gun only let me use about three fingers, with my pinky finger dangling from the end of the grip. Getting the ‘Stang out and presenting it in a hurry is downright difficult and getting the proper grip even more so. It actually makes me thankful that Colt didn’t decide to include the grip safety on this model, because I doubt anyone could use it.

Wrapping up the overview of the controls, the slide release is very usable, and the slide is easy to rack. To get a feel for how the gun runs, I loaded it up with some hollow point self defense rounds and put the gun through its paces. Surprisingly, the recoil was very light. It was much less than my 9mm, at least, and very much less than my .45. It might even be called “pleasant.” Also surprising was that despite this being a polymer handgun, the trigger is actually pretty good. There’s a little bit of take-up before the break, but it’s a nice and clean single stage. There’s no creep, and has a relatively short reset. Despite the nice trigger, accuracy is pretty terrible. This (above) was me concentrating very, very hard on hitting the target at 10 yards on a static range — imagine if I was trying to hit a knife-wielding psycho who was coming at me.

After I fired this group I proceeded to take my next 50 rounds of .45 ACP and punch the center out of the black circle with nary a flier. The form factor of the Mustang – specifically the short grip and the small sights – makes it extremely difficult to fire it with any sort of accuracy at anything more than bad breath distances.

Speaking of effectiveness, I have my doubts about the .380 cartridge. It might be perfect for Nicki Minaj to wave around while doing doughnuts in a club parking lot, but when my life is on the line I prefer my bullets to have a little more power behind them. According to the numbers a .380 is only slightly less “powerful” (in terms of muzzle energy) than a .38 special round, but to me those 10 grains of bullet weight make a difference. When you’re looking for a concealed carry gun, you want something that you can easily conceal, but can also draw and fire in a hurry. And while the Mustang XSP certainly gets high marks in the concealability category, usability isn’t so good. I tried pocket carrying this gun for a few weeks and while it disappears into my pants quite nicely I was never able to draw it and disengage the safety in a quick enough time frame to make me comfortable trusting my life to it. Like I said, the safety comes off easily — if you can find it.

If you do get it out and into the fight, you have six rounds to stop your opponent. Even when I carry my 1911, I have eight rounds in the gun and another eight in a spare mag in my other pocket. And even then, I still feel like I’m low on ammo.

In the end, the downfall of this gun is its competition. The Ruger LCP is a masterpiece of pocket-carry mousegunnery and something I’ve spent some quality time with at Gunsite in Arizona. Compared to the LCP, what you have here is a more complex solution to the same problem. And one that comes at twice the price. It’s trying to compete with the LCP, but isn’t even in the same league.

Accuracy: * *
“Meh” is the best you’ll get out of me on this. It hits the target, but compared to other guns – even in the same price range – it leaves the shooter wanting.

Ergonomics: * *
The small grip combined with the small safety mean that my big hands simply can’t use it effectively. I can’t draw it in any reasonable amount of time and aiming it is a pain in the butt.

Ergonomics Firing: * * *
Average. Not great, but not bad. The small grip is offset by the minimal recoil.

Customization: * * * * *
There’s an accessory rail which is actually pretty nifty. And the fact that these things have been around for ages in one form or another means that there’s a booming aftermarket for spare Mustang parts.

Overall Rating: *
I honestly didn’t make up my mind about the final rating until I had written the entire review, but it’s the price that seals the deal. For all the issues with ergonomics, accuracy and the muzzle energy of the round, there’s no way this gun is worth $650. I’ve spent plenty of range time with a Ruger LCP and it’s a far better gun at half the price. For concealed carry, I’ll take a double action gun with an internal hammer over this 1911 wannabe any day.

This gun was provided for review by the Kentucky Gun Company, where you can find this gun on sale. As well as the Ruger LCP, if you want that instead.