This review should probably be titled, “We’ll leave the light on for you….” or how a cheap revolver is like a Motel 6. In the spirit of the recent TTAG review of the Heritage Rough Rider, and needing a “trail/kit gun” replacement for the Ruger Single Six Convertible that I sold to “cull the herd,” I purchased a Chiappa Firearms Puma 1873 SAA-22 in .22LR and .22WMR.

You can stop reading now if you wish. The $149 special online price that appeared in my email from a big online gun website on July 4th turned out to be an ongoing disaster and disappointment. Stay away, spend the extra bucks and move up to a Best Western or Holiday Inn. This Motel 6 is a dumpster fire waiting to happen…or already burning in your pistol safe.

I have been intrigued by some of Chiappa’s “outside the box” offerings: Rhino, Little Badger, Double Badger, a triple barreled shotgun, so taking a chance with a Ben Franklin and a Ulysses Grant, I figured I’d have something for pest control and plinking. What I got was a shaky, web biting, pot metal-framed paper bag full of burning dog ca-ca. 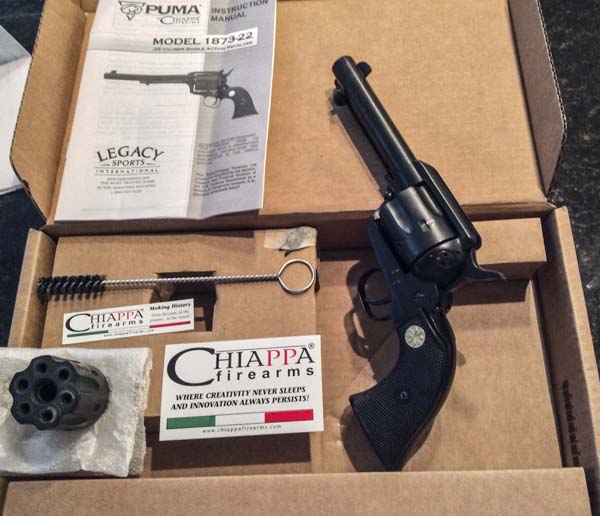 Plain Brown Box, manual, bore brush, a key to lock/unlock the revolver (I have not tried this feature so I do not know if it locks the trigger, action, hammer, whatever. It may cause the whole thing to fall to pieces which may be the safest way to handle the Puma), .22LR cylinder mounted in the frame, .22WMR cylinder wrapped in bubble wrap (not quite Ruger’s red baize bag), and two Chiappa stickers.

“…. an acronym of the German names for the metals of which the alloys are composed: Zink (zinc), Aluminum, Magnesium, and Kupfer (copper)….” <from the fascinating Wikipedia page on Zamak>

Wikipedia goes on to say:

“Zamak alloys are also used in firearms, including those manufactured by:

Henry is quality stuff. I really enjoyed my Hi-Point Carbine, and who wouldn’t want a Gyrojet rocket pistol?  Most of the others: that’s the stuff in the “Saturday Night Special” section of your local pawn shop; the one on the gritty side of town. 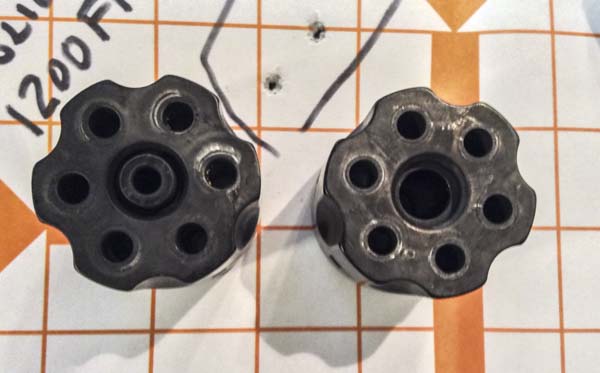 I warmed up the steel barrel with some Federal 40 gr. Solid Round Nose .22LR at my usual (for pistols) seven yards. With fixed sights and old eyes, I could not reliably hit paper, so I backed down to 10-ish feet and found the non-adjustable sights confirmed that I would have to dust off my holdover and Kentucky Windage skills as everything printed left and low of the point of aim. Unfortunately, our range doesn’t allow the smell of anything resembling shotguns or shot shells, so I could not try my standard snake/rat load of CCI .22LR #12 at 1,000 FPS.  Based on the performance of the solid .22LR’s, I believe you would have to be a little too close for comfort to Mr. NoShoulders to make an effective clean kill. A word on the .22WMR cylinder:  it stinks like a dead sea turtle in a sauna. Where the .22LR cylinder is a little rattley in the frame, the .22WMR is seismic like the San Andreas Fault. So shaky that I believe there are serious problems with the cylinder bore to forcing cone alignment.

I am assuming that the cylinder stop and the locking notches are not engineered/built in the same language.  Also, the .22WMR cylinder regularly bound up on the hammer draw. I’m not sure if it was one bore not allowing the round/rim to seat, a problem with the stir ratchet or whatever.  With what happened next, this was the least of my problems.

I have two burn marks on my left cheek (always wear BIG shooting glasses) from hot shavings hitting the stall wall and deflecting onto my Maxilla within one-inch of my eyeball. I put the .22WMR cylinder away and will never use it again.

That is unfortunate because the .22WMR out of the 4.75 inch barrel gives a satisfying bang…and a big flame front at the cylinder gap(!). Again, don’t waste your money, move on, nothing to see here but a guy who blew $150 and got two facial pits for his trouble.

Switching the cylinders involves dropping a bushing into the cylinder. You get one bushing for two cylinders.  Like any SAA, you push the button at the front of the frame allowing you to withdraw the base pin.  Unfortunately, when I went to put the base pin back in to take the photos for this review, the pin went WAY past its detent, and I’m not sure it is even worth walking to the tool box for a pair of pliers to try and draw out the pin. The trigger of this replica is very straight, the frame is fairly wide, and my long fingers had to contort a bit to allow me to get a purchase on the trigger face. I ended up using my DIP (the last joint before the tip of the finger) as my purchase point, not as accuracy sensitive as using the pad of your finger. The hammer will bite the web of your strong hand. Just like a Peacemaker. Those old soldiers and cowboys had to be durable to put up with twisted fingers and bitten webs.

ANYTHING GOOD TO SAY ABOUT THIS THING?

The loading gate snaps open and closed as well as a Ruger, bringing the hammer to half cock to load/unload allows you to stir the cylinder by hand aligning a cylinder bore with the very long and quite effective ejector rod. 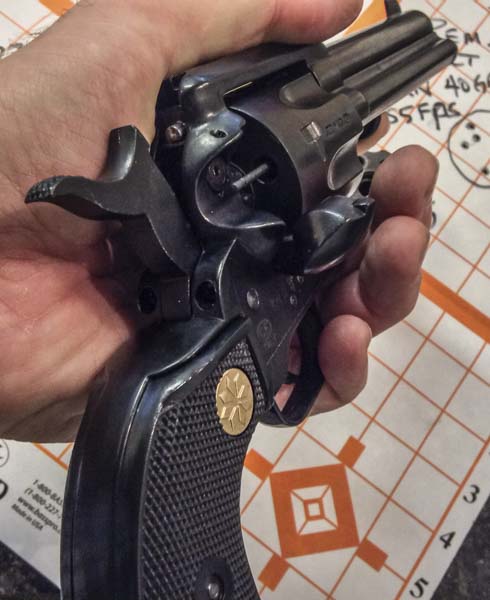 My old Ruger convertible required some fancy finger work to align a bore with the ejector, but I understand the newer Rugers now have auto alignment of bore to ejector rod.

A WORD ON SAFETY

In reality, I load a fired cartridge shell (with the rim strike turned away from the upper edge of the bore) as the “skip one” to avoid breaking the firing pin of any rimfire revolver by dropping on an empty position. This system is OK at the range, but carrying in the field this way won’t let you peek through the breechface to the cylinder back to see if you really do have an empty under the hammer. Be aware, cowboy. Hell, be afraid cowboy.

Ergonomics, Loading and Firing: *
Unloading indexing of cylinder when opening loading gate is a positive as is the “stroke length” of the ejector rod. The hammer bite and awkward trigger ergos are awful. Too much like a Peacemaker for comfort. The Heritage has a safety next to the hammer; this has a hammer that bites the hand that feeds it.

Defensive Capability: —
Buy 1,000 rounds of .22LR in a bucket, fling the bucket at your assailant, and run like hell. If you are going after a RattleHeadedCopperMocasin, bring a gun, not a Puma.

Overall: —
I cannot give this thing enough negative stars. Just don’t go there. This is a piece of junk — don’t waste your money. Don’t let anyone near this thing.  Really, buy a  Ruger or Uberti, or High Standard, or Spatula City (or buy the Heritage, at least it won’t put out your eye like a hot BB off a Daisy Red Ryder). Don’t let anyone else shoot it unless you have a great lawyer on retainer. You are not getting your money’s worth here, no matter how little you pay.