When Remington Outdoor (nee Freedom Group) bought Bushmaster in 2006, they moved manufacturing from Windham, Maine to Ilion, New York. When Remington Outdoor opened their Huntsville, Alabama plant, the brand moved again. There, Bushmaster found itself rubbing elbows with Remington subsidiaries like Advanced Armament and DPMS. The proximity presented an opportunity for Bushmaster to develop a rifle incorporating some of the more interesting tech lying around the shop. The result: the Bushmaster XM15-E2S Minimalist-SD. 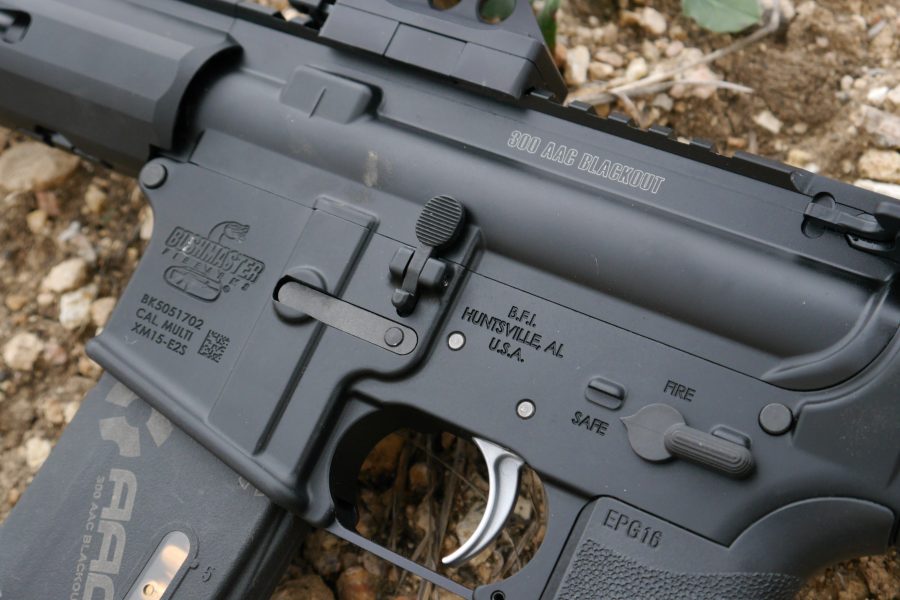 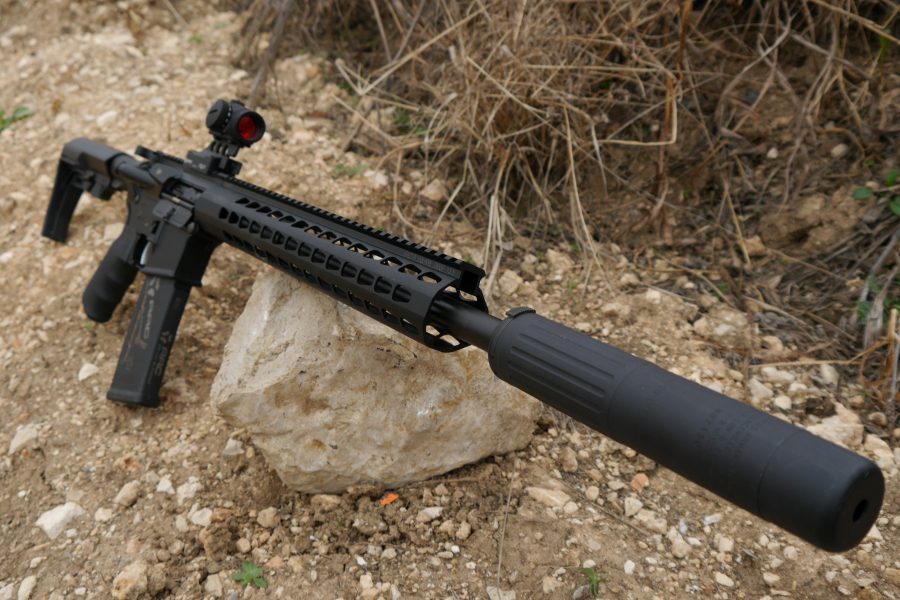 The most obvious addition to a standard Bushmaster AR: an AAC 51-tooth flash hider mount. The AAC 51T adapter is one of the more popular designs, but it does mandate a commitment to AAC products. The 51T adapter accommodates AAC’s popular 762-SDN-6, for example, but won’t work for rival brands’ silencers. Just like Apple, Remington Outdoor seems determined to keep buyers in the AAC ecosystem.

The three-prong flash hider works extremely well for flash suppression, but it comes with a minor annoyance. Whenever you fire a round, cycle the action or dry fire the gun, the flash hider prongs act like a tuning fork, producing an audible “PING.” Some owners might find the sound a minor annoyance or even cool, but enthusiasts dedicated to maximum hush will be disappointed. Another addition from the AAC side of the fence: the SquareDrop handguard.

For the longest time Bushmaster used standard AR-15 furniture. Their clam shell handguard and M4-style stock looked bulky and out-of-place in the modern AR-15 market. Addressing the issue, Bushmaster added Magpul MOE furniture to the line-up. But that’s just window dressing. Previously, there was only way to own a Bushmaster AR-15 with a modular free-floating handguard: buy one smothered in Picatinny rails, a setup that treats your support hand like a cheese grater processing fine mozzarella.

Bushmaster’s Minimalist-SD catches up with the times (this is the modern modular free-floating handguard you’ve been looking for). With AAC’s SquareDrop design SD owners can use either Keymod or Bushmaster’s proprietary KeyDrop system to attach lights, lasers, cigar holders, etc. on a reduced diameter handguard. A full-length Picatinny rail sits on the top of the handguard for your optic mounting pleasure. 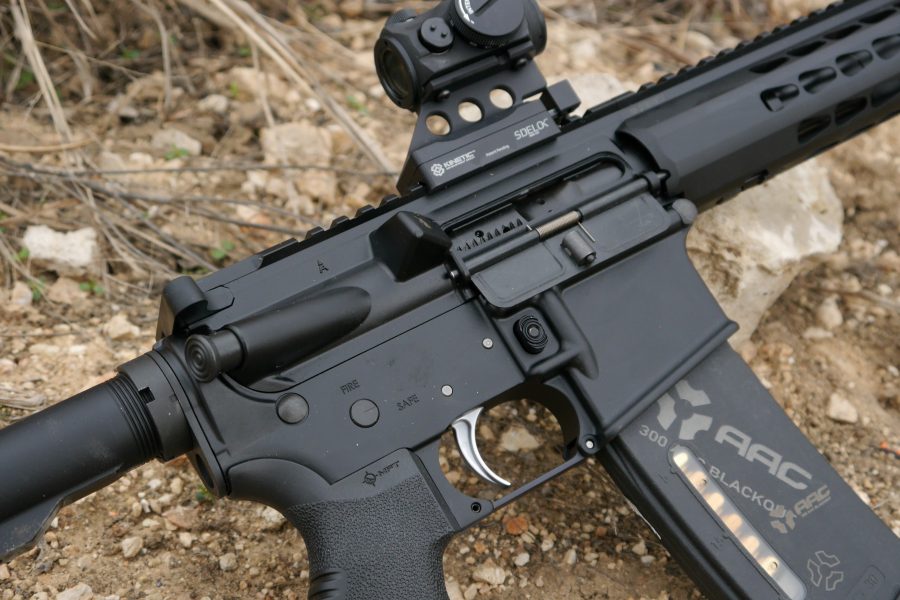 The SD’s upper and lower receiver are unremarkable. That’s not a bad thing. The receivers are solidly built and assembled; I didn’t see any machining issues or find any noticeable wobble. That’s a solid win in my book. The SD’s trigger, however, is remarkable.

Normally, a entry-level AR-15 ships with an inexpensive “mil spec” trigger group so awful that pulling it makes Todd Hodnett weep sad, bitter tears. For the XM15-E2S Minimalist-SD, Bushmaster popped an ALG Defense Advanced Combat Trigger into the lower receiver. Given the price difference between mil spec meh and the quality and accuracy improvement delivered by the $69 MSRP ALG go-pedal, this was a no-brainer. And a slam dunk. 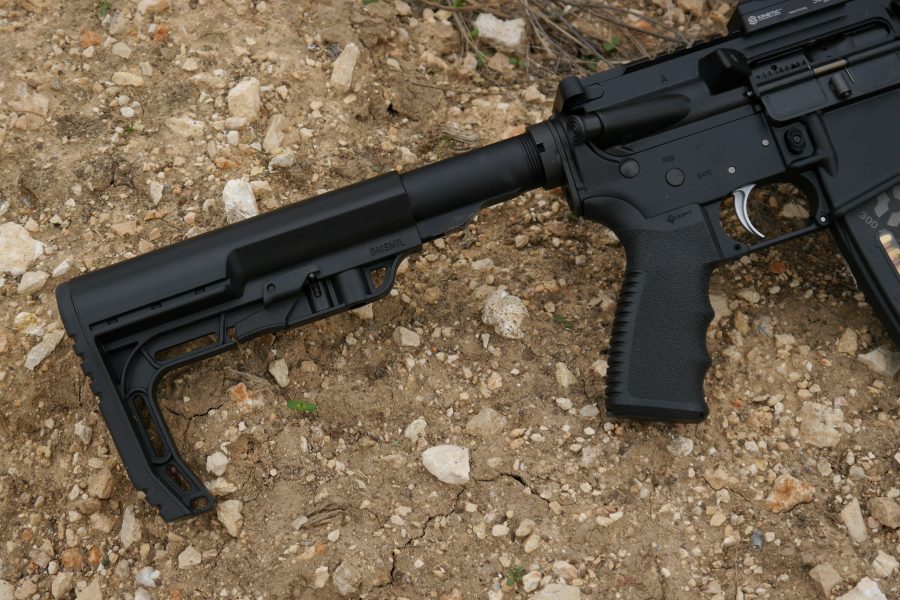 Capping off the accoutrements, Bushmaster threw out the usual “mil spec” stock and grip in favor of Mission First Tactical models. MFT’s gear is an ergonomic delight. The grip is comfortable to hold and the stock is solid yet lightweight. It’s another welcome upgrade from the standard Bushmaster offering.

Out on the range I tested the Bushmaster XM15-E2S Minimalist-SD with a variety of 300 BLK loadings, including supersonic and subsonic. I didn’t have a single issue with reliability. The gun ate everything I fed it, without hesitation. For accuracy testing, I ran a couple of different loads to figure out what the gun likes best. The 16″ 1:7 twist barrel didn’t like heavy fast loads, delivering three- to four-inch groups with the 147-grain and 150-grain flavors I had on hand. In contrast, the lighter loads (e.g. Barnes TAC-TX 110 grain projectiles) reliably achieved 1/2 MoA groups at 100 yards. Given Bushmaster’s positioning as the value-priced tactical AR-15, that’s a highly impressive feat; due in no small part to that trigger. I’m sitting here trying to think of things that could be improved on the Bushmaster XM15-E2S Minimalist-SD. The list is very short: an upgraded bolt carrier group, a nickel boron coating (given the fact that it’s intended to be suppressed) and a nicer charging handle. But in terms of value for money, you can’t fault its $1169 MSRP. (AAC’s version of this configuration runs in the $1,500 range.) In short, if you like this caliber, you’ll love this gun.

Reliability * * * * *
Zero issues, even when I threw in some rounds I found laying on the ground.