[ED: Since this review was published, Brace Built confirmed that the review gun had between 3000 and 8000 rounds through it. In addition, their current rifles no longer include the bright orange accents seen in the review gun.]

Brace Built is owned by Matt Brace, who also owns the Modern Outfitters storefront, in Garland, Texas. Mr. Brace has a good bit of previous experience in steel fabrication. It turns out that Brace Built bought out Modern Outfitters, including all the inventory and designs, and moved the company to Texas.

Bolt gun fanatics will recognize the new Brace Built Production Manager, Stephen Barrier, from his Barrier actions and chassis systems, as well as his previous work at Surgeon Rifles. The rifle I have for review Brace Built’s Modern Carbine – MC6, is from the original Meridian inventory Brace Built bought, but all future production will be done in Texas. I received this gun without any documentation and it had obviously been well shot in.  There wasn’t any significant hard carbon caked on rifle, but it was pretty dirty throughout.

It has long been my policy that if a company sends me a dirty gun, I’m not going to clean it for them. Any reliability or accuracy issues that might arise are on them. Before I began the review, I took all of the photos except for the ones that would relate to shooting groups. I didn’t clean the gun in any way, but I did liberally lube it with CLP prior to shooting.

After that initial break-open and lube, I didn’t pull the gun apart or lube it again for the entire review. I have reached tried to find out how many rounds have been through this T&E gun prior to this review, but no one was able to supply me with that information. It’s obvious that a good amount of thought went into the design of both the upper and lower receivers, as well as how the upper flows into the handguard. The standard handguard is a 13″ low profile M-LOK compatible tube.

It’s outer diameter is small enough that, held in a C-clamp style, I can then drop my support hand thumb down to my fingers and completely wrap around the handguard. That helps to move the muzzle quickly and retain control of the gun. Take a look at the forward end of the upper receiver.  Instead of ending abruptly, they’ve flared and rounded it to the same outer diameter as the handguard itself. The same flare design extends to where the upper and lower receivers match.

The control sections of the lower receiver are slightly recessed, making the other areas appear slightly higher. The effect is to visually tie in the upper and lower. This is similar to the fence-like ridge around most magazine releases. Yet another example of this style is the forward takedown/pivot pin. It’s not just a circular round head, but instead a visual extension of the raised ridge near the upper edge of the lower receiver. A lot of work was put into the shape and feel of the rifle, and it shows. The Brace Built MC6 gives you lots of quality furniture and controls standard. The Magpul MOE collapsible stock and grip are much better than the current Mil-Spec, as is the ambidextrous Radian Raptor charging handle.

Really, no one should be putting the old small Mil-Spec charging handle on anything other than military clones and bare bones budget guns. The MC6 also includes an ambidextrous selector switch from Radian, and both the magazine release and bolt lock/release are from Seekins. The Seekins Enhanced bolt release is a bit raised, but also very wide and well textured.

For those of you, like me, who like to blindly slap the side of the rifle to get the bolt going forward and the rifle back in the fight, the Seekins release is an excellent choice. For the trigger, Brace Built went with the Timney AR-15 Competition Trigger with 4 lbs of pull weight. This is an outstanding trigger. With no perceptible creep at all, this single stage trigger is an excellent choice that many make as an upgrade to their AR. For the MC6 Modern Carbine, it’s a standard feature.

Another nice touch is the nickel boron-coated M4-style feed ramp extension. This not only helps with long term reliability, but helps keep softer-tipped rounds from deforming prior to entering the barrel. 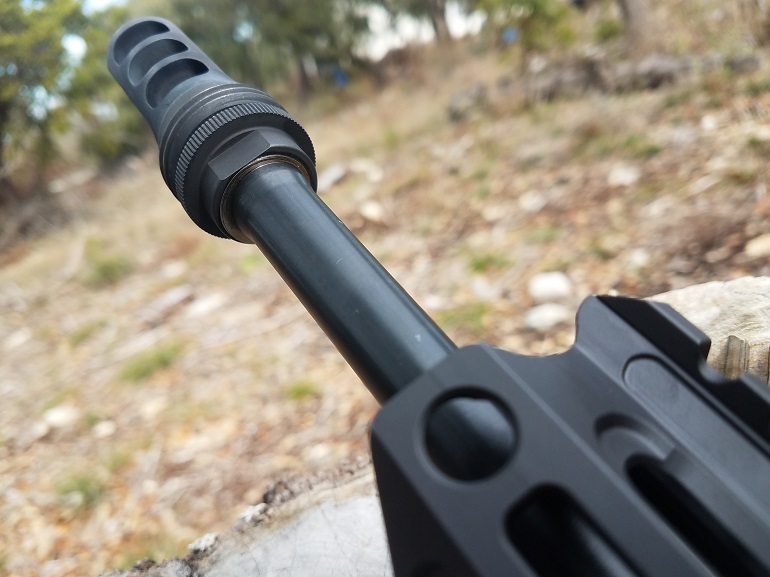 My scale put this gun at only 5 lbs 12oz unloaded and without an optic. That makes for a light, very easy-to-handle firearm. I had a simple Aimpoint PRO red dot mounted on the gun for most of the review, and the weight and balance of the MC6 was a joy. It’s feels like nothing to carry, pops to the shoulder quickly, and moves with ease.

Part of the reason the gun is relatively light weight is its 16″ 4150 Chrome Moly pencil profile barrel made by Ballistic Advantage. That thin profile barrel makes for lightning fast target transitions. With good ergonomics and not much weight up front, it’s fast and easy to start and stop the muzzle for your first, or next shot. Of course, to shoot fast and stay on target with a lightweight barrel, a muzzle brake is necessary. This MC6 came equipped with the SilencerCo ASR Muzzle brake. This brake did a fantastic job turning recoil and muzzle rise into blast and noise.

I can’t stand muzzle brakes on anything but the larger magnum calibers, but if you want a lightweight rifle that shoots fast groups on target, muzzle brakes are part of the game you’re playing, and SilencerCo makes a pretty good one. The trigger, the selector switches, magazine release and Brace Built logo are all dressed in a bright orange color. It’s a high contrast accent that makes the brand immediately recognizable.

On every piece, the orange paint is streaking, chipping, and uneven. The paint on the trigger shows obvious streaks on non-contact portions of the surface. That lack of attention to detail is a real shame on such an otherwise obviously well-designed firearm.

There’s also obvious wear on all of the locations where the upper meets the lower. As I said before, all photos of this gun were taken prior to lubricating or shooting. The dark grey marks you see throughout the photos are the remnants of the lubrication of whoever had the gun before me. Whatever it was, it’s pretty stubborn stuff, but can be worked off. The bright grey metallic marks that surround the edges where the upper meets the lower are another thing entirely. This is where the two parts are rubbing, scraping off the finish.  This is especially the case at the rear of the upper, where it meets the lower.

If this were a brand new gun, these issues would cause me to recommend something else.  But this is not a brand new gun. If this is a gun with 20,000 rounds through it — and it could be — this is completely normal wear.

The poor application of the orange accents are still concerns on an AR at this price level. Inside the gun, no such concerns were present. The bolt carrier group is made by Azimuth Technologies. I’m very familiar with this company’s work, and they really do make a first rate BCG.

The leading edges of the gas key have been rounded. Note the deep and solid staking of the key screws. This is what a direct impingement’s BCG is supposed to look like and, with proper maintenance, will certainly provide tens of thousands of rounds of reliable performance, if not more. No doubt the choice of a quality BCG helps with the reliability of the MC6. Despite the fact that the rifle was filthy with an unknown number of rounds through it prior to the review, I didn’t have a single round fail to load, fire, or eject. There were no radical changes in trajectory.

For this review, I put 500 rounds through the rifle prior to accuracy testing, which was another 100 rounds. I shot M855, M193, Black Hills 77gr TMK, IWI’s 77gr Razor Core, Sinterfire’s 45gr Frangible, and Winchester’s 64gr Power Point. They all fired and ejected just fine.

I also used both GI style metal magazines as well as lots of PMAGs. I had no issues with any of them. When it comes to precision, several rounds I shot danced right around 1 minute of angle.  There were some individual five-round groups that got under 1 MOA, but none did as an average.

The best shooting round was Black Hills’ 77gr TMK, printing five-round groups at 1.2″ averaged over four shot strings at 100 yards. The IWI 77gr Razor Core round shot the same average, but with a standard deviation so slightly more that I had to use calipers instead of my usual metal ruler to measure them.

The worst shooting round was the Winchester 64gr Power Point at 1.6″ average. I use this round on our Hill Country white tail deer when culling, and though it has always expanded and penetrated well enough, it rarely prints small groups.

All precision shooting was done from a Caldwell Stinger shooting rest using an Atibal Nomad scope set to 14 power over whatever time it took to break the shot clean. The Brace Built website recommends Hornady’s 73gr ELD Match cartridge to obtain sub MOA groups. This isn’t usually a particularly rare round, but I was unable to find it at a few different local stores, and it was unavailable or out-of-stock online at Midway USA and the others I checked. (Brownells now has it in stock.)

The Brace Built Modern Carbine MC6 provides the user with a lightweight, very fast handling AR-15 rifle that’s capable of good groups with a wide range of projectiles. It’s not a designated marksman gun, and it’s not supposed to be.

Where this gun shines is in “run and gun” style shooting with multiple targets requiring fast shots and fast transitions. With its light weight, carrying the rifle in hand is stupid-easy, and yet, because of the good ergonomics and an effective muzzle brake, fast shots on multiple targets are a breeze. Style and Appearance * * *
This should be five stars all day long, considering the well thought out design of the upper, lower, and hand guard. The chipped and uneven paint on the accents takes a lot off of this gun. If you are going to draw attention to something by painting it bright orange, you better have that part perfect. The wear marks around the mating surfaces of the receivers would only be an issue if this were a new-ish gun. It isn’t.

Customization * * * *
Any AR’s configuration and reconfiguration is almost infinite. In 2020, an adjustable gas block — which the MC6 is missing — is at least required to get an AR to five stars for customization.

Reliability * * * * *
Even dirty as it came, the gun ran and ran. That’s reliably you can count your match or your life on.

Precision * * * *
Several rounds got right around 1 MOA, but nothing actually broke that standard.

Overall * * * *
The great design, top notch components and reliability of the Brace Built Modern Carbine MC6 earn the gun solid marks. The MC6 earns an extra star for what is probably the best overall receiver set style and design I’ve seen. An excellent trigger, good furniture, and overall a very well laid out gun lead to a rifle that’s fun and easy to shoot. Not besting 1 MOA wasn’t much of a concern, as perhaps just the right round and a good cleaning would have gotten the gun there. Not having any kind of adjustable gas block or piston system at this price point was a disappointment.