About a decade ago I started boot carrying the Bond Arms Derringer in .410/.45 Colt as an everyday backup and deep concealment pistol. I absolutely loved it. Four years ago I got to review a slightly different version for TTAG. I loved that one, too.

Since then I’ve bought different holsters, different grips, and different barrels. I’ve enjoyed every single one of them. The Bond Arms derringers are the highest quality derringers ever made, with materials, craftsmanship, and quality second to none. But man, they ain’t cheap. Now, though, with two new models — the Roughneck and the Rowdy — Bond Arms has dramatically reduced the price point of their exceptional little guns, all while keeping intact everything that makes a Bond Arms derringer great. Bond Arms has been trying to figure out how to make a lower priced product that’s still true to the brand for years. According to Gordon Bond, the eureka! moment hit him not when looking at a derringer, but instead when he saw Ruger’s new Wrangler revolver.

I can understand why. When the Wranglers went up at my local Cabela’s, they couldn’t keep them on the shelf. They were so cheap, I thought, what the heck, I’ll try one out.

After I did, I bought a couple more. I shoot the heck out of them and keep one in the truck. The mechanics are sound, but with just the absolute minimal amount of finishing and fitting done to get the gun to shoot reliably. Nothing more. That got all the folks at Bond Arms thinking. They went through their derringer design, through every process and material, and looked at what was the minimum required to get the gun to function perfectly and look good, and how low they could get the price on that gun.

The difference was about $200 on the MSRP, a huge savings on the cost of most of their guns. Although the finish is the only real difference, that’s not a small amount of work. I took a walk through of the Bond Arms facility and was surprised by the amount of hand fitting that goes on with the guns.

Sure, it’s a modern facility with modern CNC machines, but the level of polishing and perfection they expect is well beyond what we see in the plastic fantastics, or most production 1911s for that matter. Each gun is inspected and often sent back several times for cosmetic blemishes. When I took a look at their “rejected’ guns, I couldn’t find the errors on many of them. That’s because the flaws were internal, such as a lack of acceptable polish on surfaces that can’t be seen unless the gun in taken apart.

That level of polish isn’t done on the Roughneck and Rowdy guns. The performance is still there, but not the same aesthetic. Bond Arms says that, just by reducing the polishing, they can make four Roughneck guns in the same amount of time it takes them to make a single Texas Defender. Those savings are passed on to the customer. The response has been what’ you’d expect. They can’t keep up with the orders for the more affordable guns and they’re adding machining capacity to meet the demand.

Although the frame is left pretty much unfinished, the flats of the barrel itself have a basic polish to them. The result is not what I would have expected. If someone had described the guns to me like that, I would give them a hard pass. But take a look again. The look is a good one, showcasing a “working gun” with a great contrast in the different polish levels. In fact, the photo above is a fully polished Bond Arms Knucklehead next to an original Remington Model 95 derringer, made well over 100 years ago. Note the polished flats of the barrel, and unpolished frame of the Remington, just like the Roughneck and Rowdy models.

Like all Bond Arms derringers, caliber and barrel length swaps are accomplished easily with the removal of a single swivel screw.  Want to change calibers from a 3″ .45Colt to 2.5″ 9x19mm, .357Magnum, 38SPL, or even a 6″ barreled .410? If that takes you more than 3 minutes you did it wrong. 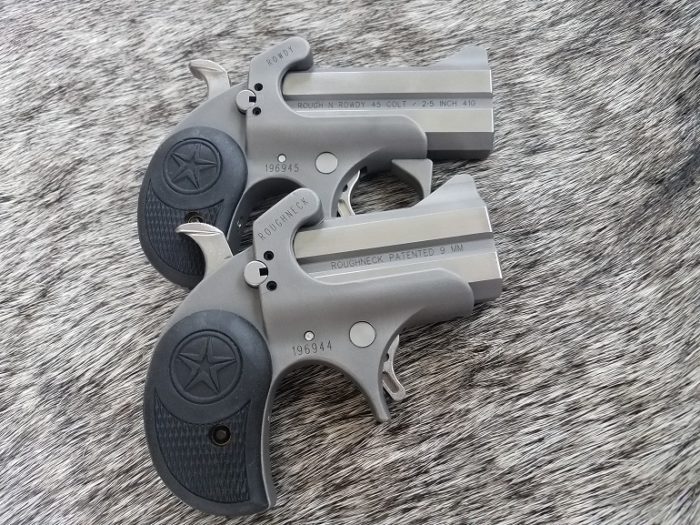 With and without trigger guard (image courtesy JWT for thetruthaboutguns.com)

Like all Bond Arms Derringers, the Roughneck and Rowdy models both have removable trigger guards. I think they look better with the trigger guards, and they can be a bit more controllable with the heavier recoiling models with the guard installed. But if you want to draw and shoot fast, you’ll need to take the guard off. It’s easily done with a single screw. Taking the trigger guard off doesn’t make the gun any more likely to unintentionally fire.  In fact the guns are pretty well overbuilt when it comes to safety.

Note that each derringer includes a large cross bolt safety. It’s completely unnecessary.  The rebounding hammer must be cocked prior to the trigger being pulled. Cocking switches the firing pin location each time the hammer is pulled. All of the traditional revolver calibers and the .410 bore barrels have an extractor bar that press both cartridges from the breach at the same time, allowing the shooter to finish extracting the cases by hand.

The cartridge rim required for that operation simply doesn’t exist on the 9mm or other traditional semi-auto cartridges, so these will need to be removed entirely by hand. Most folks find that spent cases are most easily pulled using the rim of another cartridge. In my time with these two guns, as well as shooting my Bond Arms derringer in a few different calibers, I’ve never had a cartridge fail to extract with either system.

I’ve also never had the pistol fail in any way. There’s just not much to go wrong. It’s an extremely simple design, and the pinnacle of reliability. Cartridge manufacturer and bullet shape are irrelevant to reliability. If the Bond Arms derringer failed to fire, suspect the cartridge, not the gun.

(During this very review, I had a .45 Colt round fail to fire. It failed to fire in both of the two revolvers I then attempted to fire it. Bad round.) “Precision” is not the word that comes to mind when I think of a derringer, but the Bond guns do better than you would think. Using the 3″ .45 Colt barrel, 3″ five-round groups seated off bags were easily doable at a 7-yard distance.  This is what I am used to with my 3 1/2″ barrel as well.

I found the manufacturer as well as bullet weight or charge made very little difference in group size. The limiting factor is an extremely short sight radius, non-adjustable sights, and limited purchase on the gun. Seated with the 9x19mm and shooting off a front bag, 3 1/4″ groups at 7 yards using the diminutive 2.5″ barrel were the norm.

Some rounds packed more punch than others, but none seemed to be much better or worse when it came to accuracy. Again, the limiting factor are the sights.

Note that, as mentioned in my earlier review, you’ll need to mind the barrel position when it comes to point of impact. The top barrel will shoot a 3.5″-ish group, and the bottom barrel will shoot a 3″-ish group. But each group will be a little distance between each other, somewhat depending on barrel length and caliber. I found that the 3″ .45 Colt barrels shoot about 9″ apart at 7 yards. 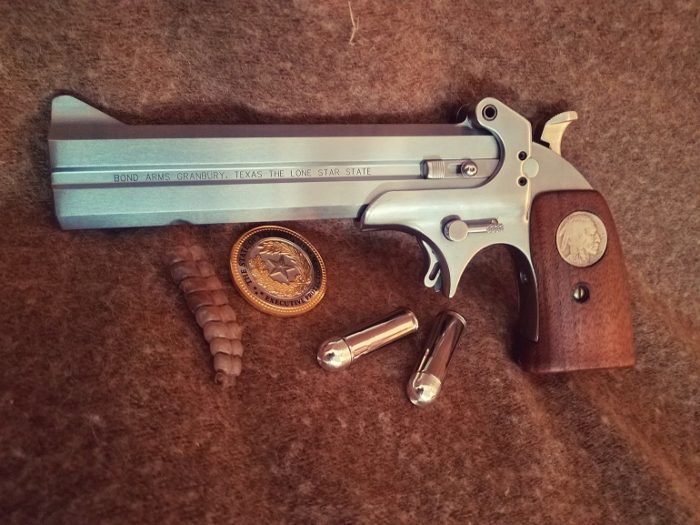 For those of you who think the Bond Arms Derringer could never be a realistic self defense gun, I used to agree with you. Then I started really practicing with the gun, delving into delusions of grandeur that I could ever be fast enough to compete in cowboy action shooting matches with them.

Then I ran into (then) world record holder Garret Martin at the Range at Austin. Using .38 SPL self defense ammunition I pulled off the shelf, he shot two rounds into a target at 7 yards away, in 7/10th of a second. He said that was so slow he didn’t really want me to show the video. I put in on my IG anyway.

How many of you can draw and fire two, hitting both, with your carry gun and ammunition in well under a second and consider it slow? Not I.

The Bond Arms Derringers have a huge following in the cowboy action shooting world, and now probably even more since one was featured in the newest John Wick movie.  I’m an unabashed fan of the company and the product, and stoked they produced a lower priced model.  I’m stoked because now even more people will be shooting these fun and reliable guns, and because now I can afford to buy another one.

Style and Appearance * * * *
Somehow Bond Arms pulled off a great look on a minimally finished revolver. It’s interesting that these turned out to look more like the original 150-year-old designs than the more polished versions do.

Customization * * * * *
All the stars and then some. It’s incredibly easy to change barrels and calibers, as well as the trigger guard and grips. Many options are available on the manufacturer’s website.

Accuracy * * * *
Variable depending on barrel length, the determining factor for sight radius. Since the machining is extremely high quality, the inherent accuracy of the gun is outstanding.