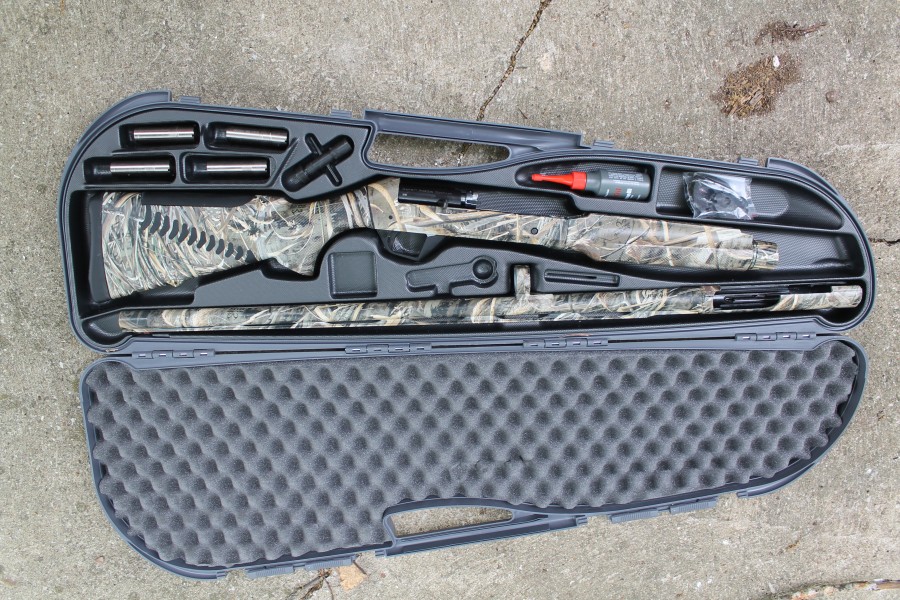 I’m not a wealthy man, but I have a weakness for expensive firearms. Especially the kind of guns that our Armed Intelligentsia insist aren’t worth the premium. So let’s get this out of the way. The review gun is a 28″ barrel Benelli Super Black Eagle II in Realtree Max 5 Camo. It comes complete with a sturdy case that holds everything you need in perfect safety and comfort. Chokes? You’ve got five. Barrels? Crio System treated for accuracy and longevity. All yours for . . . 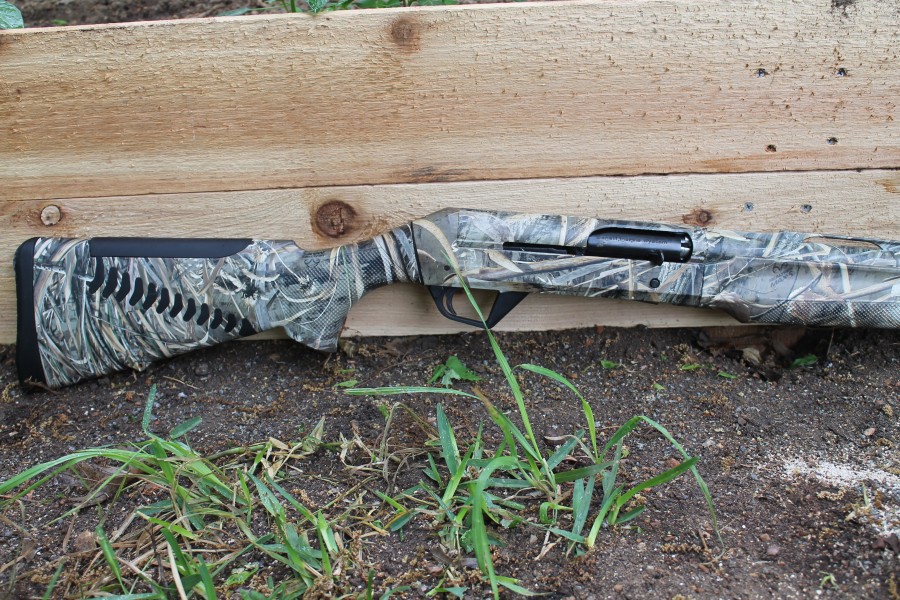 $1,899 MSRP. The Super Black Eagle II (SBE II) is the second most expensive SBE II in the lineup, eclipsed by the rifled slug and left-handed versions of the same. Here’s what you get for your money . . . Sights
The SBE II ships with a bright fiber optic at the muzzle with a steel bead about halfway back. Lining-up the steel bead over the fiber optic was intuitive and natural. When lined-up properly, there’s just the faintest hint of color around the steel bead to let you know that everything is even. Being even slightly off of this is immediately apparent and can be corrected quickly. Rapid strings of fire will result in some mirage, but it doesn’t mess with the sight picture enough to become unusable.

Adjustability
The SBE II ships with a shim kit to adjust for cast-off and drop. Out of the box, I found the drop to be a bit high. Ten minutes later, I’d dropped it a few millimeters. A firm cheek weld rewarded me with a solid sight picture.

You can adjust the length of pull by up to a half-inch in either direction by purchasing a different Recoil Pad. I found the stock pad, at 14-3/8″ to be just right. If that’s not the case for you, you can plunk down an eye-watering $90 for either a thinner or thicker chunk of rubber. Sling Attachment Points
The SBE II’s front sling attachment point sits recessed below the level of the magazine tube cap. The design prevented me from using my favorite and saltwater resistant UltraFlex sling. As you can see, I fashion a high-speed, low-drag Paracord doohicky to connect it. I felt a little ashamed in the mangroves running an $1800 gun held together with a few cents worth of rope. But I got over it.

Weight and Balance
Normally, when I weigh a gun on my trusty $13 scale, it’s off by a few ounces here or there. My scale agreed with Benelli’s number exactly: 7.3 pounds on the nose. The Super Black Eagle II’s weight didn’t seem very surprising given that it has some 28″ of barrel hanging out there and the action operates on an inertia-driven (i.e. heavy) system. The weight’s perfectly acceptable in the field. The Super Black Eagle II’s a loooong gun; maneuverability is not the name of the game. Balance and handling are, and they’re nothing short of superb. Once you get the SBE II shouldered, those seven pounds feel like . . . nothing. The shotgun’s forend grip ensures it won’t slip loose. The recoil pad sticks with your shirt or jacket like velcro. Point and shoot.

Doing so isn’t a physical burden. Benelli’s Inertia Driven System and thick recoil pad tame even the stoutest 3 – 1/2″ loads – for a while. While I wouldn’t recommend shooting those shells all day long, the SBE II does a better job of shoulder protection than most other shotguns you can buy – at any price.

Don’t Crio for me Argentina
Benelli touts their Crio System for treating barrels and chokes, claiming increased accuracy. The SBE II delivered even patterns that put more shot on target with tighter chokes. I don’t know what I don’t know, but the shot patterns were even and delivered thorough coverage of the plate at distances approximating most bird hunting engagements.

In the field
Spend a touch over 1.6 times the national average for a mortgage payment and then immediately expose the SBE II to [sometimes salty] water, mud, blood and dirty ammo. No wonder they say duck hunters are crazy. Crazy like a fox? That depends on the shotgun’s performance, of course. In the interests of establishing the Super Black Eagle II’s value, I did not baby this gun.

I treated the Benelli less like a Bentley, more like a rented Ford Focus. Though I did oil the Eagle once, I never cleaned it. On several occasions, I brought the Super Black Eagle II to the range and ran it with whatever shells I could find. I fired strings of five to 75 rounds to replicate high-volume bird shooting. I lost count of the number of rounds I put through the gun; I’d ballpark it around 500 or so, mostly 3-inch steel shot.

Rust
I couldn’t bring myself to completely submerge the SBE II in saltwater. But I let it get wet and didn’t wash it. I just stuck it in my safe and didn’t talk to it for a month. What you see below: the rust that formed during that period. It’s minimal and didn’t affect the function of the gun, but there it is. 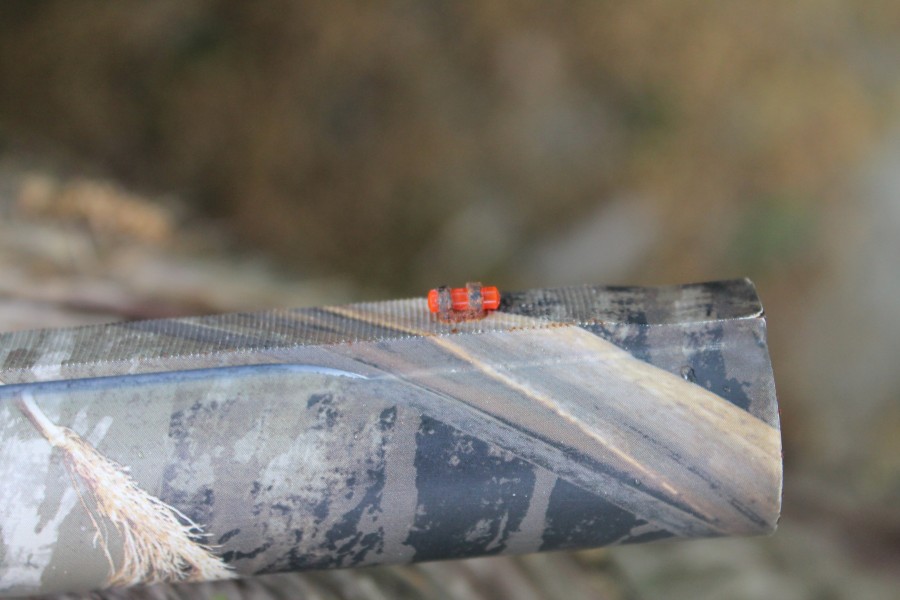 All of the Super Black Eagle II’s internals remained rust-free. I removed the surface rust shown here with some KG1 and a brass brush. I reckon $1800 guns should have robust rust protection; I was disappointed to see moderate salt spray damage the finish of one of the nicer guns I’ve been privileged enough to hold.

Jams and Failures
The Super Black Eagle II failed in the field only once. The problem occurred when a Redhead swooped low into our decoy area, thought better of it, and frantically attempted to gain altitude. I took the ensuing overhead shot leaning backwards. The SBE II was not in the pocket of my shoulder when I broke the shot. While the duck ended-up falling back to Earth, the gun choked-up in the process. In an attempt to replicate the failure, I brought it to my local range and let ‘er rip. After a dozen or so rounds, I found that soft shooting 2-3/4″ dove loads “limp wristed” would cause the aforementioned failure. Three-inch duck loads would only fail if the gun was allowed to truly free recoil, or if it was held ejection port up and allowed to freely recoil. Any resistance on my part was enough to complete the cycle. I had no trouble cycling 3-1/2″ goose loads, but managed to tenderize my shoulder very nicely. The only other type of failure I was able to record was the one above. I’m not exactly sure what happened here; I was never able to replicate it. The Super Black Eagle II seemed to hang a bit on loading the next shell this time. I racked the bolt and it was back to business as usual.

Cleaning and Maintenance
Given that I didn’t clean this gun at all and the only failures weren’t sludge-induced, I’d say that you can probably use and abuse this gun to your heart’s content. Keep throwing oil at it if it makes you feel better, but for the most part, the SBE II seems to run and run and run. If you find yourself needing to take the gun down for maintenance, you’ll be pleased at the relative simplicity of the whole affair. Breaking the gun down into its four major components, barrel, receiver, bolt carrier, and forend can be accomplished in less than a minute. Most people can stop at this point. Run a couple patches down the tube, blow the crud out of the trigger group, and wipe off the bolt. Reassemble and keep shooting. 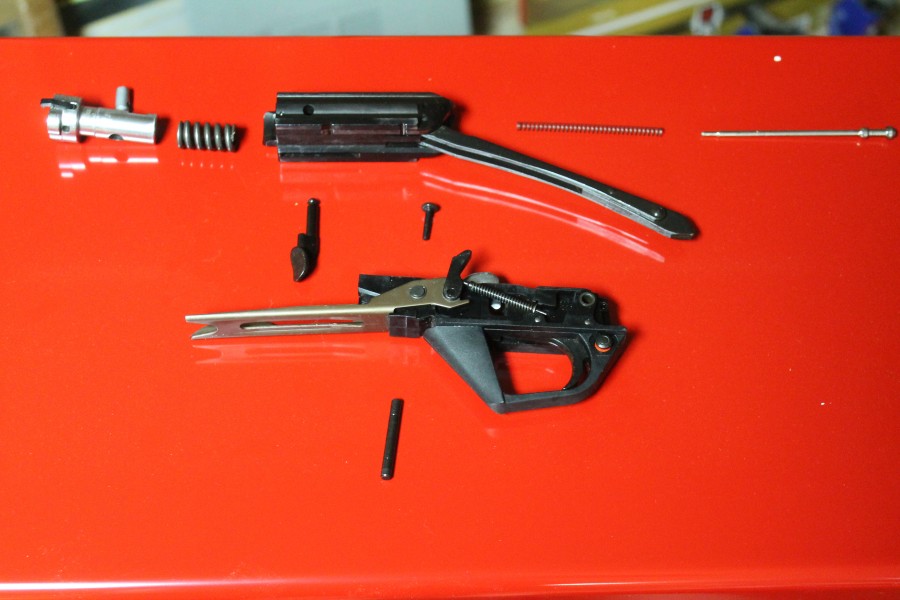 Should you choose to go further, the bolt carrier can be disassembled without tools and the firing pin can be used to push out the pin that holds the trigger group in place. This will give you more access to brush and blow out the trigger group, and will allow you to detail strip the bolt carrier. The barrel and receiver don’t have any nooks or crannies that a stiff brush and some cotton swabs can’t address and thus require only a few minutes of attention.

The Guts
The bolt assembly which makes up the heart of Benelli’s Inertia Driven System, can be broken down in less than a minute to the major components. Using a set of brushes, the operator can have the whole thing cleaned up in just a few short minutes. I’m no mechanical engineer, so my understanding of the ID System will be on the same level as my grasp on how Posi-Trac does what it does. What is apparent is that the bolt itself is backed by a stiff, fat little spring. Also apparent is that that lightweight 2-3/4″ loads and heavy-duty 3-1/2″ loads cycle without any input from the operator. Thus, the system is self-regulating.

Benelli’s video didn’t clear it up for me, but I do know that if you have the gun shouldered correctly, it will cycle anything you throw at it. Case closed. And now, the money shot: I took the Benelli Super Black Eagle II  on a duck hunt for a weekend as part of my efforts to take a mental holiday from the aforementioned mortgage payment issue. I’m a mediocre wing shooter, but I couldn’t miss. If a duck came in range, I hit it. I limited out quickly both days and came home with a cooler full of quackers. What more could a duck hunter want?

Accuracy * * * * *
At 40 yards, the gun hit where I aimed, especially when tuned with the right choke. The proof is in the pudding; it pulled ducks from the sky almost as if it were designed to do it.

Reliability * * * *
Assuming you shoulder the gun correctly, you will find yourself attached to a very reliable gun. If you manage to not get the gun comfortably seated and use light loads, you very well may see some failures to eject. Otherwise, this is an utterly reliable gun.

Fit, Finish, Build Quality * * *
Everything fits together smoothly with no rattles or creaks. The gun runs like a well-oiled machine whether you choose to oil it well or not. Two stars deducted for the surface rust.

Ergonomics * * * * *
Thanks to the relatively light weight, shim adjustment system, and excellent balance, the SBE II is a shooter’s gun. It find birds, clays and cans thrown into the air with clinical precision.

Overall Rating * * * *
For the serious bird hunter, the Benelli Super Black Eagle is worth every penny.