All else being equal, a lower bore axis will result in less felt recoil and less muzzle rise, as the recoil energy has less leverage over a shooter’s hands, wrists, and arms. GLOCK set the bar pretty high (errr, low?) in that area, but that didn’t stop companies like Steyr and Caracal from designing polymer-framed, striker-fired pistols with even less height and mass above the shooter’s hands. If we’re keeping score, though, it’s now the Strike One from Arsenal Firearms that’s king of the lowest hill. Great in theory and on paper, but what does this all mean from the driver’s seat? . . .

To be clear, this isn’t Arsenal, Inc., AK aficionados, but Arsenal Firearms out of Italy, makers of the somewhat-infamous, double-barreled 2011 with which our own JWT wasn’t entirely enthralled. A pretty big departure from the 1911 regardless of how many barrels it has, the Strike One is all modern in design, materials, capacity, and speed, and I’ve been champing at the bit to get my hands on one for years now. It’s a full-sized pistol that’s great for target shooting and competition, but the trigger may make it unsuitable for defensive use. In the locking box — one of the latches actually locks and a key is included — the Strike One comes with a collection of goodies: two, 17-round magazines (Mec-Gar manufactured), a bottle of archoil CLP, a nice cleaning kit that fits inside its own handle, and a replacement magazine release. 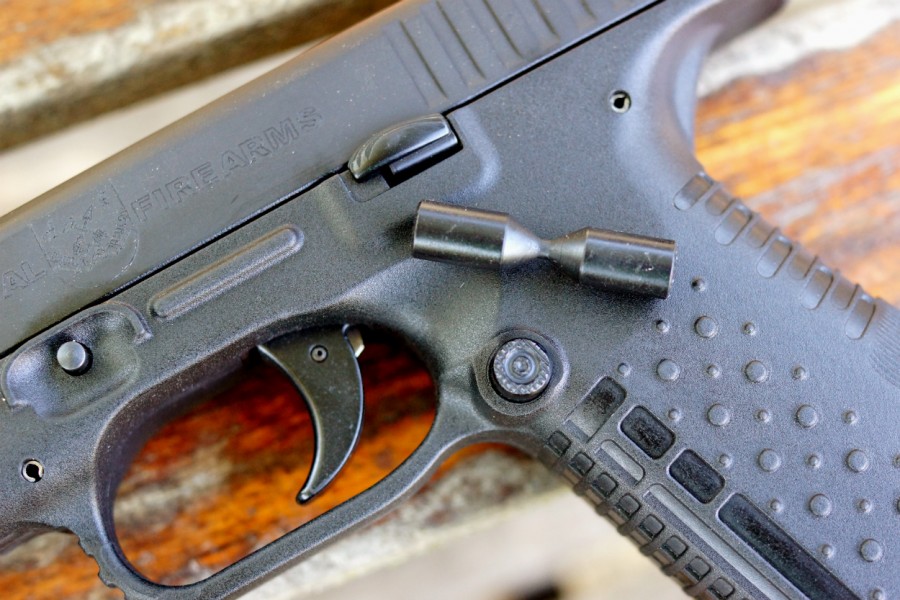 Installed in the pistol is a mag release of traditional fashion; it protrudes from one side but is flush on the other. This control is ambidextrous in that it can be removed and reinstalled for activation from the opposite side, but it’s an either/or proposition. The replacement mag release protrudes from both sides and operates from both sides, making it truly ambi. Slick.

So, we’re well-covered for releasing the drop-free magazines, but how about inserting a fresh one? On the downside, one reason that magwell is so large is that the magazines themselves are “staggered” but not actually, truly double-stacked. This is why, despite the long length of the grip, the Strike One “only” holds 17 rounds whereas a similarly-sized, yet double-stacked pistol like the CZ P-09 or XD(M) Competition packs 19 in its mags. Everything about the frame is very ergonomic, from the grip angle to the curvature to the texture, and I think its circumference will work well for the vast majority of shooters. Although that little support or reinforcing brace in the beavertail looks like it might not be comfortable, it absolutely is. As you can see in the photos above and below, the rear sight is actually built into the slide plate and is not adjustable for windage or elevation. On the plus side, it certainly maximizes the very long sight radius. The front sight is dovetailed, making it adjustable for windage. From behind, there’s plenty of light around the front sight blade to aid in quick acquisition. As has become fairly standard, the end of the striker is visible in a witness hole in the slide plate, but only when it’s cocked. That’s all well and good, but the Strike One stakes its biggest bragging rights on that ultra-low bore axis. So how does it stack up? 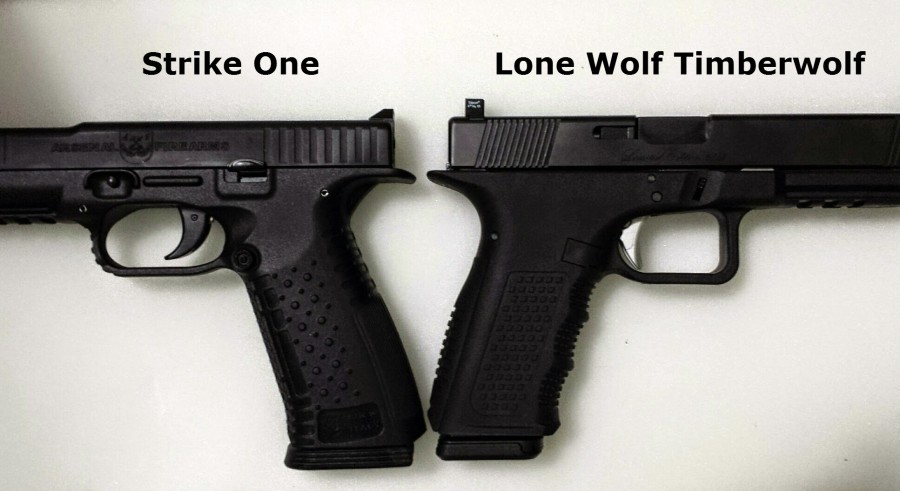 It’s hard for me to accurately measure this sort of thing, and some of it is going to vary from person to person based on where one’s hand naturally ends up on a given firearm. But it’s definitely fair to say that the Strike One allows for an incredibly high grip and has an incredibly low bore axis. Lowest ever in a semi-auto pistol? Maybe, but considering I just happen to have two other pistols here that are solid competition for the title, if the Strike One wins it isn’t by a huge margin.

The striker release (or sear, or whatever you’d call it) is incredibly flat because it moves horizontally instead of vertically, which is how the similar part operates in 99% of striker-fired pistols:

The slide rails are particularly thin and uniquely low to the frame. I also love how long they are — almost full-length — whereas most polymer-framed pistols have only a small rail nub at each corner. The barrel is also extremely low in the frame, which allows for that low slide profile but also aligns rounds for a straight shot into the chamber. Of course, there’s a little trick to getting that barrel to sit so low; the Strike One doesn’t employ a Browning-style, tilt-barrel locking mechanism. Rather, the barrel moves straight forwards and rearwards without any up or down motion at all. A very well-machined locking block keeps the barrel locked to the slide until it’s pulled down sufficiently by the captive takedown pin, effecting a recoil action delay. 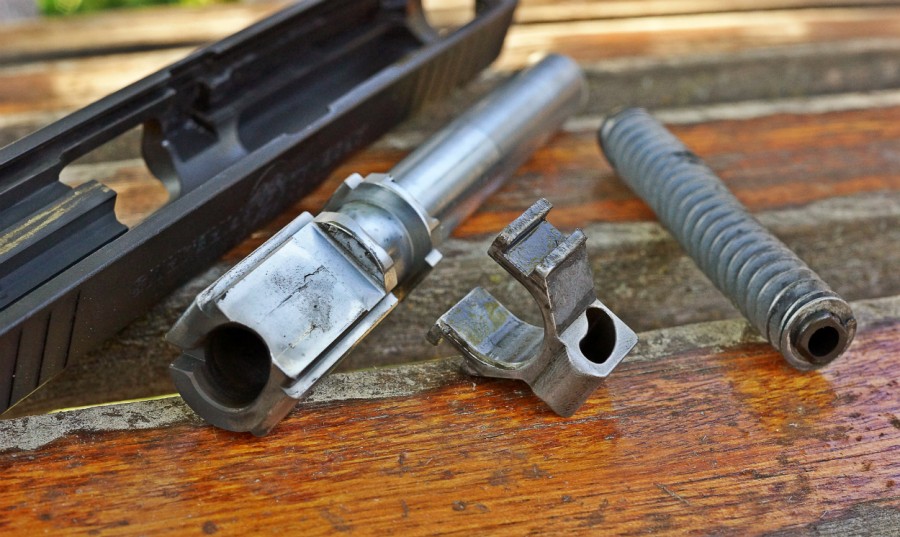 In fact, the fit, finish, and machining on everything is entirely top notch, as is the molding of the polymer frame.

Seems like most of the big players jumped on GLOCK’s trigger shoe safety blade design, but Arsenal went another route. The entire trigger shoe makes a bit of a pirouette, pivoting on a pin and clearing a catch. The trigger is nice and wide. It’s comfortable on the finger and looks and feels like a real target trigger. Now, I must mention that this is the second time this pistol has been in my hands. I sent it back to Arsenal Firearm’s U.S. importer and distributor, IFC, to have them do a little ‘smithing. IFC applied its competition trigger job as, basically, the standard Strike One trigger was a pain in my bum. Resetting it required letting it all the way out, but there was no perceptible reset click or sound to it when it reset. Worse, the last portion of the trigger pull had such low return spring tension on it that the sudden drop in pressure on my finger led me to believe it had reached the end of its travel before it actually had.

The result was short-stroking the trigger — pulling on it for another shot before it had reset. It happened during rapid fire and it even happened during slow, precise fire from a rest. The break was good, but the overall travel length was a bit on the long side, I felt that the pull weight was maybe a little on the low side, and that complete and total lack of any sort of tactile reset was the deal breaker.

Fast forward a couple of weeks, and the pistol is back here with IFC’s competition trigger job. And the reset is much improved! Not only does it reset quite a bit sooner than before — prior to releasing the trigger safety portion of the pull — but it can actually be felt through the trigger and makes an audible “click.” I still think the return spring is a bit light, but this is now a good, relatively clean, fast trigger.

Only it’s a bit light. Like, a 2.5 lbs. pull weight light. I’m cool with this for target shooting and competition use, etc., but in my opinion it’s just way too light for any sort of defensive or duty use, especially on a firearm with no safety.

Thanks to the entirely amazing Dvorak TriggerScan unit that’s here for testing — and if I can afford it ($$$) I’m going to buy it — I’m able to show you exactly what the trigger pull looks and feels like:

As you can see, the pivoting safety feature accounts for about 40% of the trigger’s total travel. Yes, the break does feel a little bit weird. Normally a trigger breaks right near its moment of peak pull force, but this trigger actually gets lighter, then heavier ahead of its break. That travel distance is very short though so it’s barely detectable by somebody with sensitive, blogger fingers while pulling the trigger very slowly. The TriggerScan, though, sees all.

Thanks to the competition trigger job, the shooter can ride the reset and doesn’t have to repeat all of that trigger safety take-up on subsequent shots. Telling the TriggerScan to start right at the reset point results in a ‘subsequent shot’ pull that looks like this:

It’s a shooter, folks. The Strike One is well-balanced, it’s comfortable in the hand and points naturally, the controls are well-designed and in the right places, it stays flat while shooting and has mild felt recoil, and the long sight radius leads to solid real-life accuracy like what Joe Grine and I experienced from the 5″ Walther PPQ. Yeah, I’ll take that PPQ’s trigger over the Strike One’s trigger all day every day and, as it typically ships without the competition upgrade, twice on Sundays…and all of the other days, too.

Don’t let my nitpicking sound too serious, though. In the grand scheme, the factory trigger really only falls flat on the reset — the pull is decently smooth and the break is crisp — and for me the light pull weight already relegated it to “fun” use anyway. Other than the Strike One’s somewhat lofty MSRP, that missing reset is simply the only gripe I can come up with, and it was fixed quite well by the optional trigger job.

Overall, it’s a truly excellent pistol and just about anybody would shoot it adroitly.

Accuracy from a sandbag rest wasn’t as good as I expected considering how well I shot it on the range. To take my sight alignment fudge factor out of the equation I shot a group with a rail-mounted laser and turned in a basically identical result. In the case of this Strike One, this is what it’s capable of at 15 yards with these ammo brands (average of all the 5-shot groups is about 1.75″). 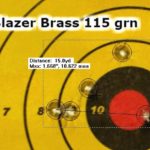 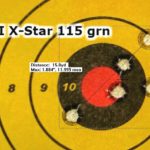 If the MSRP is any indication, Arsenal is quite proud of the Strike One. Truth be told, it should be. This pistol absolutely nails it in every way other than my whining about a less-than-perfect trigger. From aesthetics to materials and machining quality to ergos to how it feels while firing, I’m a fan. It’s good enough out of the box to replace my heavily-worked competition pistol…except the trigger’s just not quite there.

Accuracy: * * * 1/2
Mechanical accuracy is good. About average for a 5″ barrel pistol. The PPQ 5″ turned in tighter groups as did the smaller HK VP9. On the range, though, the Strike One easily holds its own with its long sight radius and minimal, consistent muzzle flip.

Ergonomics: * * * * *
Grip shape, size, texture are great and the controls are just right.

Reliability: * * * * *
It was 100% for me including a couple brands of hollow point and ammo spanning the entire 9mm weight spectrum from 50 grain (Liberty) to 147 grain. The quality of the metallurgy, machining, and polymer frame give me warm fuzzies and the exceptionally shallow feed angle from magazine to chamber leave me thinking it’ll eat anything you feed it.

Trigger: * * * factory, * * * * competition
Either way it’s a decent target trigger with a light pull weight and a much cleaner than average break. The competition trigger gets bumped up a star for having a reset that’s shorter and — even more importantly — can actually be felt and heard.

Customization: * * *
As it’s new to the market, options are very limited. There are a handful of holsters and maybe one other front sight available, but other than that I think you’re stuck with it how it is. No swappable grip panels, either. However, it’s a pretty solid gun just how it is.

Overall: * * * *
If the competition trigger job came with the same benefits, but had a pull weight in the 4 to 5 lb. range, I’d be willing to go five stars on the Strike One. As much as I enjoy the very light ~2.5 lb. pull weight, I can’t help but feel it’s toeing the line of being unsafe for a safety-less pistol. At best, that relegates it to play use. Because of the high quality and how excellent the Strike One is in every other category, it’s getting four stars despite that somewhat nonplussing MSRP.

Is The Revolver Dead? Is That a Trick Question?