The ubiquitous AR-15 lower receiver is the Trojan Horse of the gun world. When it quietly insinuates itself into your gun safe beneath a pencil-barreled M4 upper (or in my case a dedicated .22 rimfire upper), your spouse has no idea how many parts and accessories you’re going to start buying for it. This is a review of a really big ‘accessory’: ArmaLite’s 5.56mm flattop upper receiver with a 16-inch barrel and an A2 front sight. If you’ve outgrown your off-brand, pencil-barreled M4 upper and want to move up to something more refined, comfortable and accurate, start here . . .

ArmaLite builds a dizzying selection of AR parts, assemblies, and complete rifles. This particular upper receiver assembly starts with an A4 flattop receiver and is kitted out with a chrome-lined, double-lapped full-profile 16″ barrel, an A2 front sight, a mid-length gas system and handguards, and an A2 flash hider.

The result is a compact but slightly heavy 16″ carbine upper which provides exceptional accuracy and heat stability in a package the same size (and price) as a generic M4 clone. 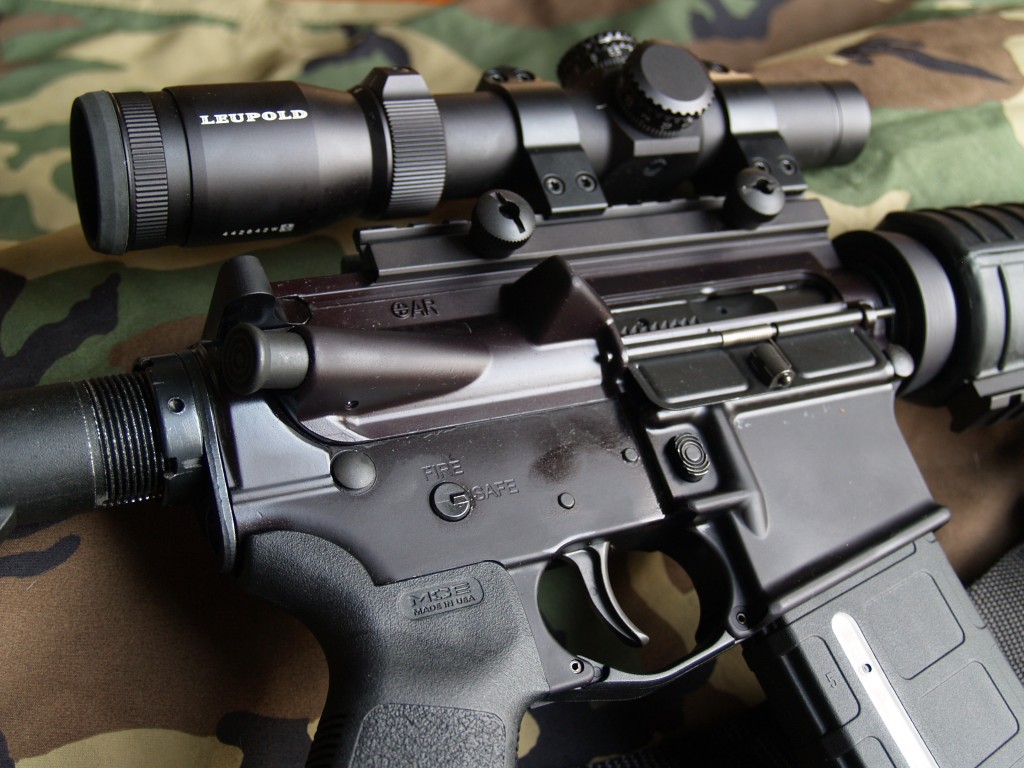 My entry-level lower receiver assembly has given me some grief in the past, and by ‘grief’ I’m talking about a defective chain-firing trigger and a recoil buffer that jumped its retaining pin and went walkies. After I installed an ArmaLite 2-stage trigger and re-fitted the buffer tube, these problems seem to be a thing of the past. Even so, I was delighted (and not a little bit relieved) that the ArmaLite upper attached to it quickly and positively.

The takedown pins lined up instantly and clicked firmly into place, and just as importantly they stay in place until it’s time to push them out. There’s only the tiniest bit of play between the upper and lower halves. Judging from how it shot at the range, I don’t think the play has much of an effect on accuracy.

I noticed that the outside thickness of the ‘mil-spec’ ArmaLite upper was about 1/32″ larger than the also supposedly ‘mil-spec’ lower receiver. This led me to wonder whether my dirt-cheap lower is actually ‘mil-spec’ in all its dimensions, or whether Xtreme Machining (who made the lower) might have cheated a little bit and cast it to a slightly smaller external dimension. Not being a machinist I’ll never know for sure, but I’d bet money that ArmaLite got it right.

With a single exception, this ArmaLite upper displays superb fit and finish. All metal finishes are deep and even, and there are no visible tool marks to be found anywhere, inside or out. The charging handle was slightly stiff out of the box, but it lapped itself smooth after I fired a few magazines through the gun.

The only issue I discovered was a minor but irritating one: the fore-end halves aren’t held very firmly by the delta ring. While they’re in no danger of falling off, they rotate slightly  and rattle a bit. I added a Magpul MOE vertical foregrip, and it only made this more noticeable and irritating.

I’ve contacted ArmaLite for a fix or replacement, and I’ll keep you posted. Again, the “issue” doesn’t seem to negatively effect the rifle’s accuracy.

This particular ArmaLite upper (catalog number U15A4CBA2) comes with a low-rise flattop receiver and an A2 front sight. Most shooters would probably choose to save $15.00 by swapping the A2 front sight for a low rail gas block. Flip-up front sights are cheap and widely available.

The receiver itself features six inches of indexed low-rise 1913 rail. It’s ready-made for a detachable carry handle or BUIS, and it’s also G2G for an Eotech or Aimpoint. They’ll co-witness with the A2 front sight, but a lower-1/3 co-witness (my preference) requires a riser mount.

I mounted a Leupold 1.25-4x, but my medium-height Warne 30mm rings left the scope mostly obstructed by the front sight. A low UTG riser was the cheapest solution, but I’m not thrilled that I had to bolt an extra quarter-pound of metal to the receiver.

Not much to report here. The ArmaLite upper fed, fired and ejected everything we could stuff into my Magpul magazines, from premium Hornady defensive and varmint ammo to Remington Green Box and even steel-cased Tula hollowpoints. I’ve never used the forward assist on any AR-15, and this upper receiver continued that exemplary tradition of positive chambering.

Ejection was also positive and enthusiastic. It turned out to be a little too enthusiastic for Joe Grine, who was shooting one lane to my right and got showered with hot brass (and steel) until we put a shell deflector partition between us. Extensive testing earlier this year proved that ArmaLite’s 1:9″ twist barrels perform best with 55-grain bullets. Luckily for everyone, these are the cheapest and most commonly available 5.56mm rounds available. When I tested a complete Armalite M-15 carbine, I averaged 1.5 MOA with cheap 55-grain commercial reloads, but I thought the gun could do better:

If I could test several brands of match-grade 55-grain ammunition, I would probably find one that prints 1.2 MOA with this rifle.

Was I right? No. I should have gone for 1.0 MOA instead. This upper consistently shot 1.2 MOA with Remington Green Box 55-grain FMJs, and slightly better with 53-grain Hornady Superformance loads. I usually accuracy-test rifles with a 9x scope, but Joe and I got groups like these with a 1.25-4x Leupold Tactical scope maxed out at 4x. I’ll post a full review of the Leupold Tactical scope in the next few weeks (hint: OMFG), but here’s a nice picture of it to cut-n-paste into your Christmas List. Your wives can thank me later. And yes, you will be needing that riser mount (so to speak.) It’s a marvelous piece of glass, but the Leupold’s relatively low magnification put us at a disadvantage when shooting for accuracy at 100 yards. With my mediocre eyesight, lovely cloverleaf groups at 50 yards opened up to 1.2″ groups at 100 yards. C’est la vie. I also ran a box of the aforementioned 53-grain Superformance loads through it. They impacted slightly higher than the Remington Green Box, but they were only slightly more accurate and cost more than twice as much.

We also fired a handful of Hornady TAP defensive loads, which were (oddly) less accurate than the cheap Remingtons. Joe fired those without having much trigger time on the gun, and he attributed the lackluster results to ‘operator headspace error.’ I ‘m happy to shoot 1.2 MOA with cheap Remington Green Box all day long, exactly as this gun is set up right now. That’s more than satisfactory for a non-custom AR upper with a quick-handling tactical scope. The gun might shoot even better with a bigger scope and fancier ammo, but our next round of testing went in the other direction: the cheapest 5.56 ammo in the whole darned Internet, the dreaded steel-cased Tulammo hollowpoints. These groups look pretty good, until you notice that they were fired at only 50 yards.

At $210 per 1,000 rounds delivered to your door, Tula ammo lets you stock up cheaply for whichever Maya Doomsday, Zombie Apocalypse or Skynet activation that you’re most afraid of. Tula ammo will let you shoot at T1 cyborgs, cannibalistic scavengers, or the living dead to your heart’s content. But it’s a good thing all these post-apocalypse aggressors are big targets: Tula ammo won’t hit anything smaller than a softball at 100 yards. Leave it to the Russians to make ammo that turns your tackdriving AR into a bullet-spraying Kalashnikov. You gotta give it up for Tula, though, because this commercial ammo (manufactured for the American civilian market) is only 1/3 more expensive than Soviet-surplus 5.45×39 ammo.

I’m neither surprised nor disappointed by the Tula ammo’s crappy accuracy out of this exceptionally accurate upper receiver. In fact I’m pleased as punch that it functions with 100% reliability, and I can’t wait to blast through the rest of it and order more. (Tip o’ the hat to www.sgammo.com for some insanely low prices and quick, cheap shipping.)

The ArmaLite’s heavy barrel and mid-length handguards inflicts a weight penalty of more than a pound over the thin and heat-sensitive barrel of an M4 clone. With a typical collapsible-stock lower receiver, your carbine will tip the scales at about 7.5 pounds empty. Remember that a loaded 30-round magazine weighs another pound, and choose your accessories carefully if you’re going for a lightweight CQB rifle!

With the exceptional accuracy this upper has demonstrated, I’m more inclined to build it out as a handy 16″ version of a Designated Marksman Rifle, and I’m seriously considering ditching my collapsible stock for a fixed A2 unit.

A really cheap 5.56mm AR upper, assembled from unidentified parts by an anonymous builder, will run you a hair less than $450 if you’re lucky. You’ll get an unlined barrel thinner than a buggy whip, and if your luck holds it will function properly and shoot less than 3.5 MOA until the barrel heats up. You might even get a warranty, at least until the builder goes out of business.

For fifty bucks more (or $65 more for the A2 front sight) you can get an Armalite upper receiver like this one. You’ll get 1.5 MOA or better accuracy from a double-lapped chrome-lined barrel that won’t overheat, all with 100% reliability and a lifetime warranty from a manufacturer that’s been in the AR business since the very beginning.

Your mileage may vary, but I know how my dollars would vote.

RATINGS (Out Of Five)

Reliability ****
100% reliability with good, bad and just plain ugly ammo. When we finish the crate of Tula I’ll add another star.

Fit And Finish ***1/2
Good machine work and deep, even metal coatings. Subtract a star (for now) for the rattly handguards.

Overall ****
100% reliability and bolt-action accuracy from a competitively-priced (but heavy) AR upper.