Meet the Altor Corp pistol, a single-shot pistol with a unique design and interesting trigger. The Altor is available in either 9mm or .380 ACP. It’s an American made gun made by a small company in Phoenix, Arizona.

This is not a gun for everyone, but I found it to be a rather neat weapon that’s quite solid and well made.

As I’ve pondered writing this review, I’ve tried to come up with a few reasons why someone would want a gun like this. That’s because the limited utility of a single shot 9mm handgun makes it a tough sell.

It’s a very unique concept, and will most certainly appeal to those of us who like odd or unusual guns out there. It reminds me of the CIA deer gun, which itself was a spiritual successor to the famed Liberator pistol.

The Altor pistol only has six parts in total. It’s remarkably simple, and that kind of design intrigues me. As a single-shot pistol, it could be easily suppressed and would be quite quiet without a moving action. There is also a great argument for the weapon as a veterinarian tool for putting down large animals, and B&T makes a single shot 9mm pistol with a similar purpose. The fact that it’s a single-shot weapon means it works well with rat and snake shot and could be a cheap pest remover. I’ve heard many comments of people saying it looks like a hot glue gun, and others have described it as a spray nozzle for a hose. It kinda looks futuristic, but more like a pulp fiction blaster and less like a Kriss Vector.

That’s a low price for a gun you can toss in a tackle box, or a toolbox, or a truck to use as a utilitarian, special purpose tool. The gun is made of polymer and stainless steel, so corrosion shouldn’t be an issue. To load the weapon, you have to remove the barrel. First, engage the safety, depress the trigger and twist the barrel counter clockwise to align with the safe line on the frame. Remove the barrel and insert a round onto the shell holder.

Slide the barrel back into place with the word TOP pointing upward. Twist the barrel into the fire position. Now you are ready. Behind and slightly above the trigger is a manual cross-bolt style safety. I know what you are thinking. There is no trigger guard, and that’s dangerous. In reality, the design of the trigger makes a trigger guard unnecessary.

The Altor’s trigger is bizarre. The way it works is simple, it’s just different than any other gun I’ve ever fired.

At this point, the trigger flies forward, bringing the firing pin with it and firing the weapon. It’s almost like a slam fire trigger.

At first, I could barely hit the target at 10 yards. Here are thefirst five rounds I shot with the pistol: But a little practice helps. As you can see this little gun can be quite accurate once you get the hang of the trigger. It also appears I got a keyhole, but that was the only one during my testing so I’m thinking it was a fluke. Those targets were at ten yards. At twenty yards, I was hitting a ten-inch gong quite reliably. 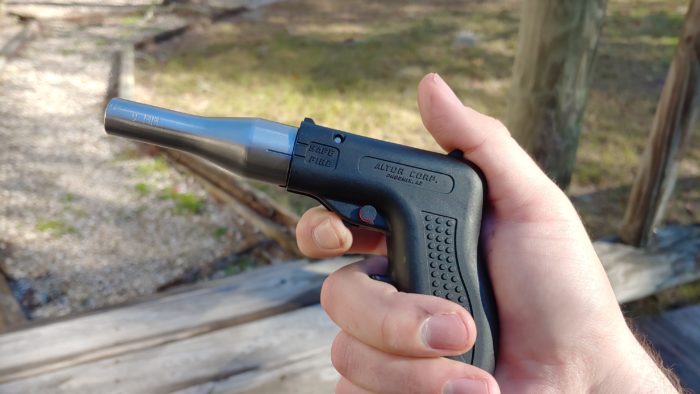 Keep your fingers under the nub (Travis Pike for TTAG)

To master the trigger, you have to understand how to grip the weapon. The nub in the middle of the grip is where your hand needs to stop. If you go higher than that, you’ll likely block your trigger finger from reaching all the way to the rear and keeping the weapon from firing. It’s actually very easy to do correctly after you toss a few rounds downrange.

I prefer to have a weapon that’s not picky about how I grip and fire it. I can easily imagine a violent situation where your grip isn’t great. While the Altor is plenty lethal, I don’t see it being my first choice for a self-defense gun.

The recoil is a little stout, and that’s to be expected from a subcompact 10.5-ounce handgun. Add the fact that you don’t have a reciprocating slide to buffer a bit of the recoil and you get a gun that has a little kick to it.

The minimalist sights are built into the frame and easy to use. I think the front sight could use a dab of white fingernail polish to contrast with the blacked-out rear sight. They work well enough to hit your target a the close ranges the gun’s intended for.

The Altor pistol never failed to fire in the hundred or so rounds I’ve put through it. You may think that’s not a high round count, but the time it takes to load and unload a single shot pistol 100 times is substantial. The Altor’s simple design makes it very easy for it to be reliable. When you examine the few parts the gun has, it’s clear this is a quality, well-made weapon. Attention and care are evident in the assembly of this firearm, and the quality of the components is all very obvious.

Altor did an excellent job of designing the gun, as well as using high-quality parts. The metal components are stainless steel, and the polymer is a high performance reinforced nylon 6.

The Altor single-shot pistol is a utilitarian, special purpose pistol made for tasks more associated with pest control and putting animals down. Its design is what has captured my imagination. Six freakin’ pieces are all that make up this very simple gun.

I’ll never own a deer gun or a Liberator, but I can easily afford to own an Altor. It has proven to be accurate, reliable, and even fun to shoot. While it’s not for everyone, it does have an appeal I can’t deny.

Ergonomics * * *
The downside is you have to grip it in a very specific way for the trigger to reliably work. that’s also a safety feature. Plan on taking some time and ammo to learn the Altor’s trigger.

Accuracy * * * *
This shocked me the most. The Altor is quite accurate for what it is, more so than it should be. Once I mastered the trigger it was fun to see what the little gun could do.

Customization N/A
At the moment there is nothing here. I could see a future where you could swap barrels and shell holders to accommodate different calibers, but Altor isn’t there yet.

Bang for Your Buck * * * * *
The Altor single-shot pistol is remarkably affordable. Just about anyone can afford one. That’s a good sign and selling point for this odd little gun. Rarely do unique weapons succeed if they are also expensive.

Overall * * * *
The Altor single-shot pistol is a very interesting design. The quality is undeniable and the low price makes it an attractive concept. With only six pieces in its construction, I can’t help but love it. Check it out here.