The Ultradyne C4 Dynamount is a dual aperture sight. The front sight is essentially a very short tunnel you look through, and so is the rear sight. The visual effect is that your target is seen inside a circle, inside a circle. It has long been known to be one of the most, if not the most accurate iron sighting set-ups.

The only downside to using two different tunnels is that they can dim the target image, or the outside diameter of the tunnels is so thick that it obscures too much of the target. Ultradyne USA recognizes this and provides the user with multiple options for apertures, both front and rear.

Of course, one of the biggest determinants of precision is the distance between the two sights, or sight radius. Ultradyne gets the maximum amount of sight radius by putting their Dynamount front sight right at the end of the muzzle.

In order to use their C4 front sight, you’re going to have to install one of their compensators. I hate muzzle brakes, and I don’t have them on any of my rifles, with the exception of a few military antiques. The good news is that Ultradyne offers their Athena Linear Compensator as one of the mounting options. I have no idea what a linear compensator is. Ultradyne claims the Athena Linear Compensator “sends a lower percent of sound back towards the shooter, optimizing sonic performance over recoil.” Maybe, but I couldn’t tell any difference in the sound between that and a simple A2 flash hider. Also, I was wearing quality ear protection. The muzzle device is simple enough and well made. What the Athena is really good for is attaching the C4 Precision folding front sight with their Dynamount system. The mounting system allows you to mount the front sight at either the standard 12 o’clock position or at a 45 degree offset left or right.

To mount the sights way out of the muzzle you have to use one of the Ultradyne muzzle devices. Alternatively, they use Picatinny mounted front sights as well, but you are going to lose that long sight radius. The C4 front sight sits high above the muzzle, but folds down in case you want to use it as a backup iron sight. My guns have either irons or glass, but rarely both. The front sight is well thought out. No tools are required to adjust the elevation, but I did need a small flat head screwdriver to adjust the front sight windage. Unlike many other systems, the entire front sight column moves left or right for windage adjustment. That means the aperture itself is always centered with the same amount of light on each side. The C4 rear sight is equally well made, and just as well thought out. Like the front sight, the entire column moves, keeping the aperture centered. No tools are required to adjust for either elevation or windage. Use the rear sight set at the “2” position and then zero with the front sight only to 200 yards.

Using a 55gr bullet moving at 3,200fps, the rear sight numbers will now correspond to the listed number of yards. The 2 will be set at 200 yards, all the way to the 6 at 600. Any other bullet or speed will differ. Each click of the elevation of the front sight will move the impact 1.2MOA, and each click of the windage approximately 1/2 MOA. 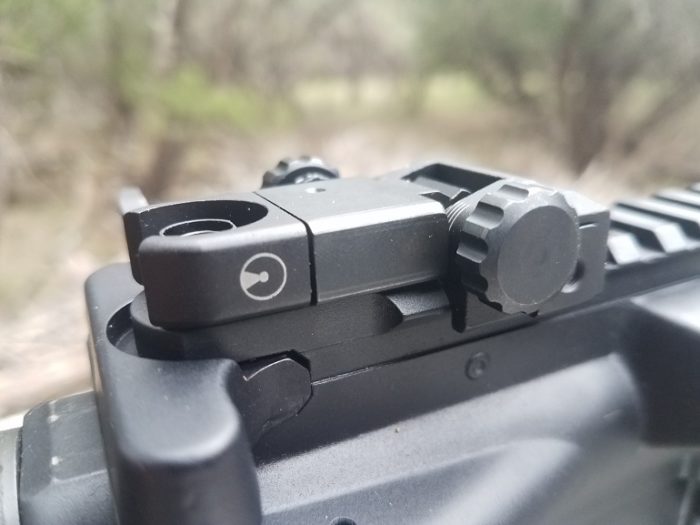 The sights are all metal, tough, and smart. A great American-made product.

But do they work? And do they work in low light, where many dual aperture sights fail? Let’s find out. To test how well the sights work, I used the same Colt Competition 16-inch AR-15 in 5.56 NATO for all of the shooting. I’ve had this rifle for a couple of years now and I’m confident in its capabilities. I used the same USGI-style metal magazine, and I used the same Caldwell Stinger Shooting Rest.

The UltraDyne sights are set up so that the clicks correspond to with M193 ammunition out of a 20-inch barrel. I don’t have a 20-inch barrel, but I do have a whole bunch of M193, so I used the same lot of IMI’s M193 55gr FMJ ammunition for all of the shooting.

Aiming at a 2-inch diameter bright orange circle set on a black background outdoors in bright light at 100 yards, I used a Primary Arms 12-power telescopic sight to verify the overall precision of the rifle with this round. I chose 2 inches because it was the smallest orange circle I could make out with the naked eye at that distance. I shot four strings of five rounds, averaging 1.4-inch groups.

I get on an iron sight kick every once in a while. I’ve tried a lot of different brands over the years and the sights I’m most happy with are the ones that came with my Smith & Wesson M&P 15-22s. They are very similar to the aperture rear and front post I was issued on my M16s.

I’ve been using those sights on this Colt Competition AR-15 for the last couple of years. I’ve taken quite a few pigs and culled more than a few hill country deer and the occasional song dog with this exact set-up. It’s a solid performing combination, and therefore the combination I wanted to use to see if the Ultradyne sights could be beat.

Starting with a clean bore on the Colt Competition AR-15 with the S&W M&P 15-22 sights mounted, I shot 20 strings of five rounds, measuring each string after shooting it. All shots were taken in bright daylight at the 2-inch orange circle.

My average of all of the strings was 3.4 inches. I then waited for a clear day at sunset to shoot. This time, in the dimmer light most hunting happens at, the smallest dot I could make out was 4 inches, so I used that size orange circle. I shot 4 strings of 5 rounds. The average climbed significantly, to 4.5 inches.

Now that I had a baseline iron sight grouping, I mounted the UltraDyne irons and went to work. The rear sight came with the .070” ghost ring included and the front sight was set with the 12 MOA aperture. Starting once again with a clean bore on another clear and bright day, I shot the same 20 strings of five rounds and measured the results. It was actually slightly larger than my S&W sights at 3.5 inches. Then, at sunset, I shot the same four strings of 5. The group was almost exactly the same as the S&W, at 4.2 inches. The problem was obvious. The rear aperture was too big for me.

I know everyone says your eye will automatically center the front aperture with the rear, but it’s not perfect. The smaller the rear sight — as long as you’re still able to see — the better. I swapped out the .070” rear aperture with the .050” and did the same thing. By the way, the rear apertures can be swapped out quickly with no tools, and the spare actually stows inside the rear sight windage knob. Neat. 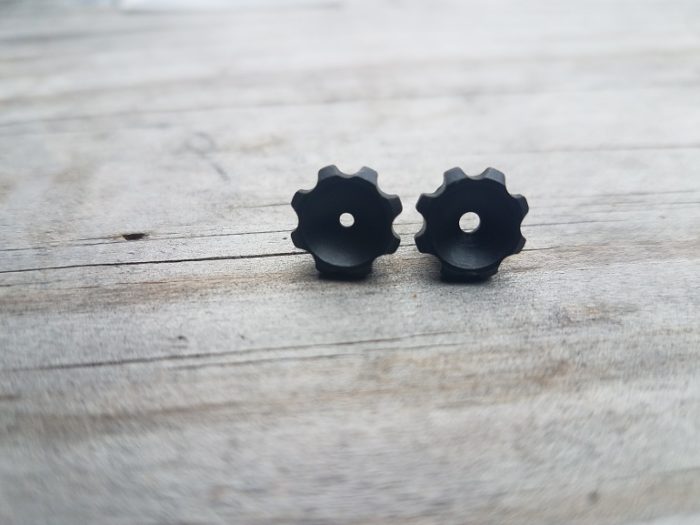 I cleaned the bore, waited for another clear day, and shot again. The results were very different. First, it was much faster to center the front aperture to the rear, and I could still see the 2-inch dot. My average this time was right at 3 inches. At sunset, seeing the 4-inch circle was definitely more difficult, but the average dropped to 4 inches.

I kept the .050” rear aperture for the rest of the tests.

The next clear day and with a clean bore, I installed the 8 MOA front sight aperture. Again, this required no tools, although it took a while to get the hang of doing it without 3 hands. Fortunately, I got plenty of practice.

Using the 8 MOA (the smallest available) aperture I could barely make out the 2-inch circle. I moved the sight into some shade and lost it entirely. This could only work purely as a target set-up for me, and even then only on a bright clear day or a very well lit indoor range. But man, if I’ve got that bright day, the results are exceptional. Using the smallest front and the smallest rear, my groups shrank dramatically, all the way down to a brightly light average of 2.2 inches. What’s more, the spread was extremely uniform. Waiting until sunset, using the 4-inch target was a no-go with the 8 MOA aperture. I just didn’t have enough light to make out the target.

Moving up to the smallest rear and the 10 MOA front aperture gave me my best results all around. Shooting on a bright clear day and starting with a clean bore, my average was 2.7 inches. At sunset on the 4-inch target, it raised to an average of 4.1 inches.

From my second round, I knew the .050” rear and 12 MOA got me a daylight result of 3 inches and a sunset average of 4 inches.

For the last shot group I used the .050” rear aperture and the 14 MOA front. My bright light clean bore shooting on the 2-inch target scored about where my first group with the rear large aperture did, at 3.5 inches. The sunset shooting at the 4-inch target stayed right about the same as everything else, scoring just outside the circle at 4.3 inches. Considering that the largest target I could clearly make out at sunset was 4 inches, it’s not a surprise that, regardless of the sight size, as long as I could see the target, all of my groups were around 4 inches.

In bright light, the smallest Ultradyne aperture set reduced the group size I shot with my familiar irons by almost 1/3rd. That was a much greater improvement than I suspected. Unfortunately, the aperture was too small to use in low light.

Using the next smallest, my low light groups were just as good as any others I shot with any iron sight set-up, but my daylight groups were also much better than my previous S&W M16 style sights. There’s just no negative there. The 10 MOA front and .050-inch rear gave me a better performance during bright light, and no worse in the dim light.

The Ultradyne sights aren’t cheap. At all. They are very well made, well thought out, and they just work great. I was surprised at the precision I could wring out of a 16-inch collapsible stocked service rifle with them.

The set-up reviewed here is $319. It’s worth every penny.  Before this review I was comfortable with my old set-up and incredulous that such a system would work well in both target and hunting conditions. I’m a believer now. Overall * * * * *
I’m thrilled to see that folks are taking iron sights seriously again. Ultradyne has helped to reverse the backward trend of forgetting the basics and provides an ultra-precision product for the serious shooter. Outstanding stuff.